Opinion | One man, nation under distress 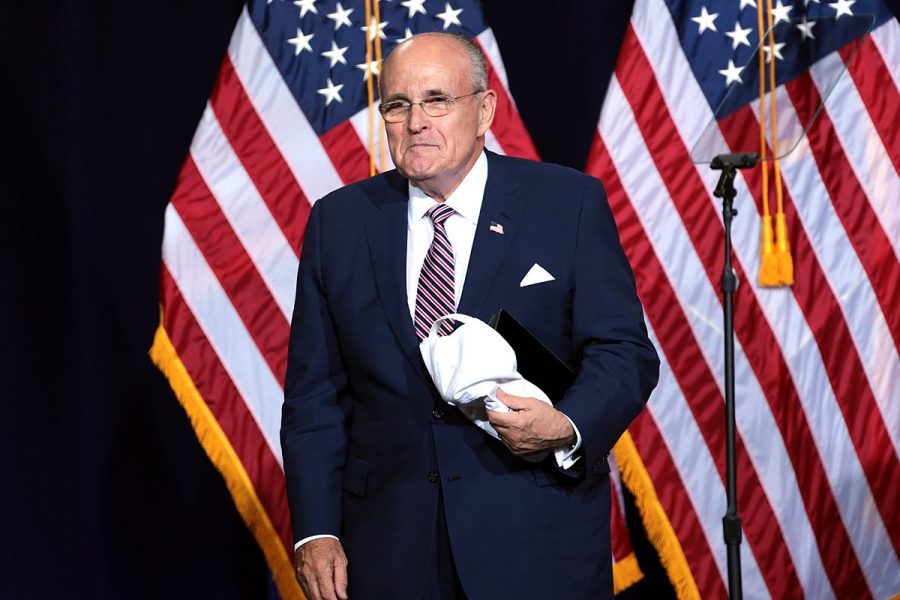 Rudy Giuliani speaks to supporters at an immigration policy speech hosted by Donald Trump at the Phoenix Convention Center in Phoenix, Arizona on Aug. 31, 2016.

As 2020 approaches its turbulent event horizon, the year will end with one last casualty in forever ending the career and reverence of America’s Mayor: Rudy Giuliani.

A man once seeped in universal admiration for a heroic response to the 9/11 attacks now degrades himself as the laughing stock of Sacha Baron Cohen’s new Borat film, the political theatre of investigating Biden and performing as President Trump’s personal attorney.

Subsequently, Rudy embodies a court jester for the Trump administration charged with cheapening and corrupting 2020’s election results — a stark contrast to the man who, in 1981, was the youngest to hold the Associate Attorney General position at the Justice Department.

Nonetheless, Giuliani’s drastic societal fall marks the end of a historical arc for 2020 and himself; both manifesting the deterioration previously bellowing beneath America, yet now unleashed.

In a feature for Rolling Stone, journalist Seth Hettena interviews several past and present Giuliani aides who all sing one chorus: America’s Mayor is gone, and in its wake, “Rudy slips further and further from the glory he once knew.”

Today, where a 9/11 mass-casualty event occurs every day from COVID-19, America is deadlocked in development against this ruinous gloom. In America’s previous encounter with profound grief, it was none other than New York City Mayor Rudy Giuliani who stepped up during 9/11 and healed a broken nation.

Thanks to Giuliani, American resiliency flourished amidst the ruins of lower Manhattan — even after the indescribable chances of being two blocks away from the south tower that fateful morning.

Bob Kerrey — former Democratic governor and senator of Nebraska — affirms in a New York Times article, “Giuliani did what the president didn’t do,” adding, “He went to all those funerals. And that grieving got us back to normal.”

What is there to make when an American hero outlasts their glory? In the case of Rudy, it appears the former American mayor is only a lonely shadow of himself: Promoting ludicrous conspiracies designed to debase democracy instead of leading a wounded nation.

On September 11th’s shell-shocking aftermath, Giuliani — with only two hours of sleep — sought support from a city psychologist on how to communicate to a traumatized city. Today, he recovered from his COVID diagnosis by receiving a “celebrity” COVID treatment at the discretion of President Trump, while countless ordinary Americans continually lack sufficient medical care.

Strikingly, the Rudy of 2020 is perceived as Trump’s absolute fixer — one who produces problems faster than stitching solutions — when during his 1993 mayoral campaign, Giuliani refused a breakfast bought from Trump: The man he now passionately serves.

Nonetheless, there must exist a crucial acknowledgment that both 2020 and Giuliani’s faults do not originate from random circumstances, but instead are culminations of ignored complications and foundational defects in American society and the human psyche when under momentous pressure.

Both 2020 and Giuliani overlap in their intense diversions from the normal: Life forced into social isolation for the public good, and America’s Mayor drenched in sweat with hair dye riding down his face for an inept, counterfeit press conference — not to mention the entire Four Seasons post-election fiasco as well.

It is never an attractive affair to watch any individual spiral. Although certainly the human psyche and age play pivotal roles in Giuliani’s downfall, it must be noted that when anyone is pressed into untimely circumstances, their response warrants a realization of core-character.

Still, for moral purposes, it is inordinately arduous to determine whether a single character — or, in this case, year — is conclusively positive or negative. For the numerous obstacles this year has presented, it is vital to recognize the aspects for which America did unify: arguably most notably coalescing in America’s streets to protest police brutality.

For history’s sake, America’s Mayor still exists as a hero in the etches of the past. Today, however, it is Rudy Giuliani — America’s Mayor turned corruption enabler — alone who overshadows his legacy and capitulates during a year marked by extraordinary adversity.

If current behavior is used to predict future outcomes, then Rudy will endure his misaligned fate. Nevertheless, Giuliani serves as the nation’s reminder that the American fairytale can materialize or flee at a moment’s notice, and definitely, it will be the individual character that persists through the best and worst of times.

As America’s COVID nightmare begins to fade, the American public will resolve what there is to bring or leave in a post-COVID America. In regards to Rudy Giuliani, it may be best to pocket his fortunate past and grant history the rest of the conviction.

For a nation and man divided yet ingrained into one another, it can only be wondered whether each inspires or reproaches the other in their fateful histories.