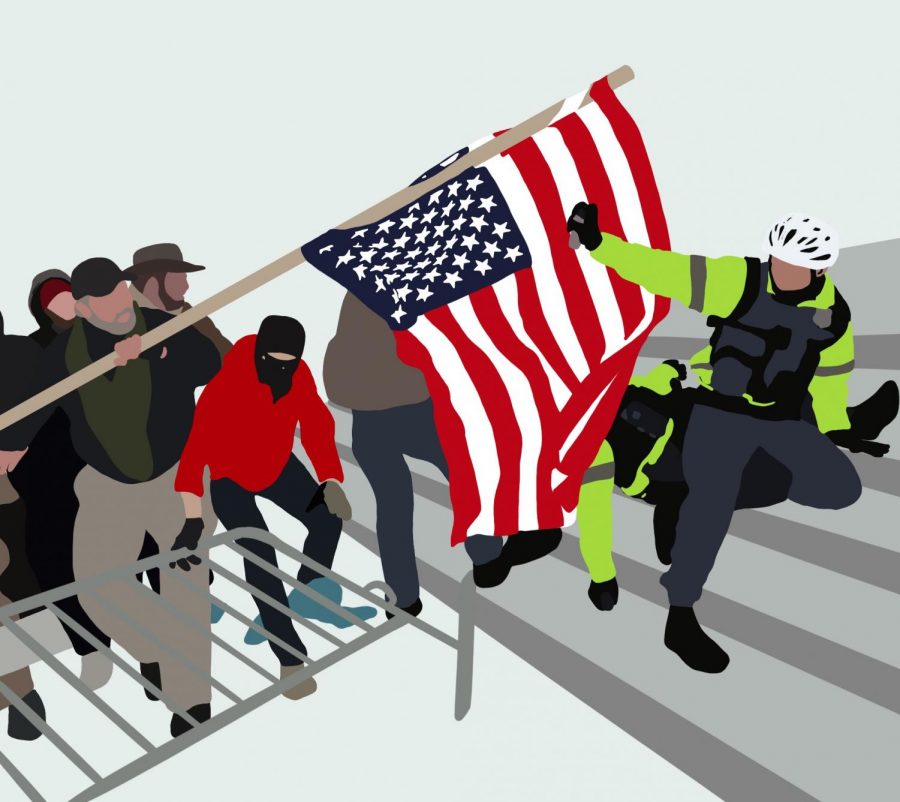 By The Daily Illini Editorial Board
January 14, 2021

It is difficult to overstate the horrific nature witnessed by the nation last Wednesday, Jan. 6., when the seat of democracy, the United States Capitol building itself, was penetrated by an angry mob.

Five would die as a result of the violence that unfolded within the Capitol building, dozens sustained injuries and multiple present during the siege have tragically taken their own lives in the past week. Pipe bombs, molotovs, firearms and plastic handcuffs are some of the items seized in the riot, items that reveal the assault on the Capitol could have quickly turned into a massacre or a hostage situation.

The Senate chamber was sealed seconds — not minutes — before rioters reached the Senate doors. Tear gas was triggered in the Capitol building rotunda. The rebel flag was flown inside its walls. Guns were drawn on the House floor. Many journalists and politicians feared for their lives, with Maine Senator Susan Collins writing the experience had her at first convinced it was the Iranians striking on the Capitol. Many will suffer lasting trauma.

Images and videos demonstrate the rioters who breached the building were destructive and violent. Legislators’ offices were ransacked, now missing laptops, documents and mail, including Speaker of the House Nancy Pelosi. Windows were smashed. An officer was killed when a rioter hit him over the head with a fire extinguisher.

What did the president remark about these infamous and tragic events? Among scripted sentiments wishing for peace and telling the rioters to go home, “We love you. You’re very special.”

The president resisted calling in the national guard, refused to condemn these rioters nearly as severely as he did to city looters this summer and still has not acknowledged that President-elect Biden won a free and fair election.

When it comes to the average rioter involved, there are no politicians desiring anything but prosecution to the fullest extent. But when it comes to holding those accountable responsible for the mob’s incitement by repeatedly lying to these crowds for months, some GOP lawmakers insincerely call for “unity” by avoiding impeachment.

But to move forward and unite requires accountability. If these lawmakers wished for unity, they should have united with the other side to impeach. A terrible precedent would have been set if lawmakers refused to impeach a complicit president over a siege of one of the nation’s most important buildings.

This breach of a secure and important institution, the Capitol building, was the culmination of months of inflammatory rhetoric and lies of widespread fraud attempting to delegitimize and overturn the certified election result.

The silver lining to all the ugliness the insurrection engendered is that it served as a rude awakening to many that this rhetoric is dangerous and bears consequences. Three cabinet officials have resigned. Seven senators who planned to object to the election result changed their mind and voted to certify. And just today, Jan. 13, 10 Republicans joined House Democrats in voting to impeach President Donald Trump for the second time during his only presidential term.

Accountability is required in order for the nation to start healing. Blood has been shed over this transition of power. Those in law enforcement who failed to prevent the breach, rioters who broke the law and entered the Capitol building and those at the top who indirectly orchestrated the insurrection by spreading lies and tacitly encouraging violence must all answer for their respective roles.