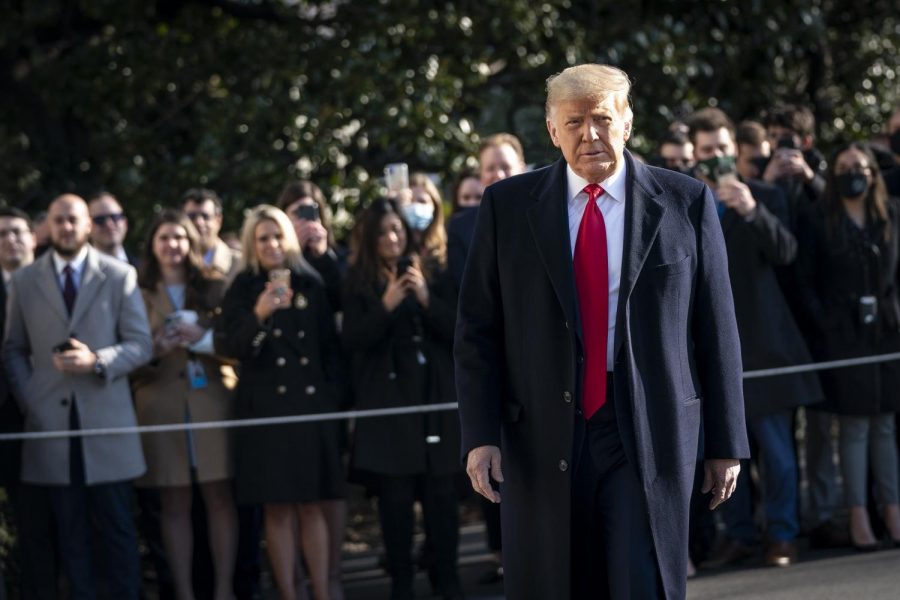 U.S. President Donald Trump turns to reporters as he exits the White House to walk toward Marine One on the South Lawn on Jan. 12, 2021 in Washington, DC.

Presidential elections always seem to bring to the surface the deeply sowed hostility that lies within America’s two-party system. The structure of the campaign process is largely to blame —  beginning as early as the primaries, the formula to emerge victorious consists not only of candidates selling their skills and agendas but also lambasting their competitors.

As a result, an almost fan-like attitude indicative of professional sports is liable to form within voter blocks of respective candidates. Rather than focusing on the immeasurably important task at hand — determining who is the best fit to lead the United States of America — many people can get far too caught up in supporting “their guy.”

The dishearteningly prevalent “my guy” mentality harms the American public’s mechanisms to promote accountability in D.C. and is detrimental to good governance. If supporters of a victorious candidate cling more firmly to their allegiance to the president than they do their allegiance to the U.S, a number of negative consequences are sure to arise.

First and foremost, such staunch loyalty will inevitably result in poorer performance from the president. Although many rightfully have their reservations about former President Donald Trump, this claim is not unique to him — it applies to anyone to hold the office.

If the entire citizenry tracks the president’s actions with a watchful eye, that is upwards of 328 million pairs of eyes holding him accountable to do the job and do it well. However, when half of the country’s citizens are blindly loyal to the sitting president and will go to great lengths to justify his every action, the public’s power to hold him accountable is dreadfully weakened.

In this scenario, not only are there fewer citizens dedicated to ensuring the leader of the people is performing his job effectively, but such efforts to promote accountability are being actively mitigated by the relentless supporters who inexorably contest the validity of every single critique being made about “their guy.”

Such people with a fan-like mentality aimed toward the president are missing the point — it could not matter less whether someone supported the victorious candidate in an election because whoever is elected to office does not only serve the people who put them there. The president serves every single American citizen regardless of their political ideologies or voting history.

For the sake of consistent diction, it’s safe to say the president is everyone’s “guy.”

Though it may be to the chagrin of his opposers, by definition, President Trump was America’s “guy.” The United States electoral system that has been used to select a new president since the country’s birth determined that Donald Trump was the right man for the job. Many might feel differently two impeachments later, but the election results remain true.

The problems arose when his most loyal supporters lost sight of that fact and hailed President Trump as their own personal vanguard of justice and liberty instead of as an agent for all people of the United States. In adoring Trump so unremittingly and praising his every decision, they hampered the public’s ability to collectively check him and lowered the standard for his performance.

None of this argument is to say that being supportive of a president is antithetical to an efficient or responsive government. Obviously, groups of citizens with differing moral and political values will perceive the actions of the president in different ways.

The keyword, however, is “actions.” The last four years saw a large sect of the American public root their allegiance in the president himself as opposed to the actions he took during his time in office, which led to the fan-like attitude that diminished the public’s accountability power by never even allowing a negative thought about the president to cross their minds.

Now, Joe Biden is everyone’s “guy.” Although it is highly unlikely that a similarly passionate band of unceasingly loyal Biden supporters will emerge, the American people must collectively close this chapter of tireless loyalty to any president in order to encourage effective governance and leave no opportunity for something as catastrophic as the Capitol siege to occur ever again.