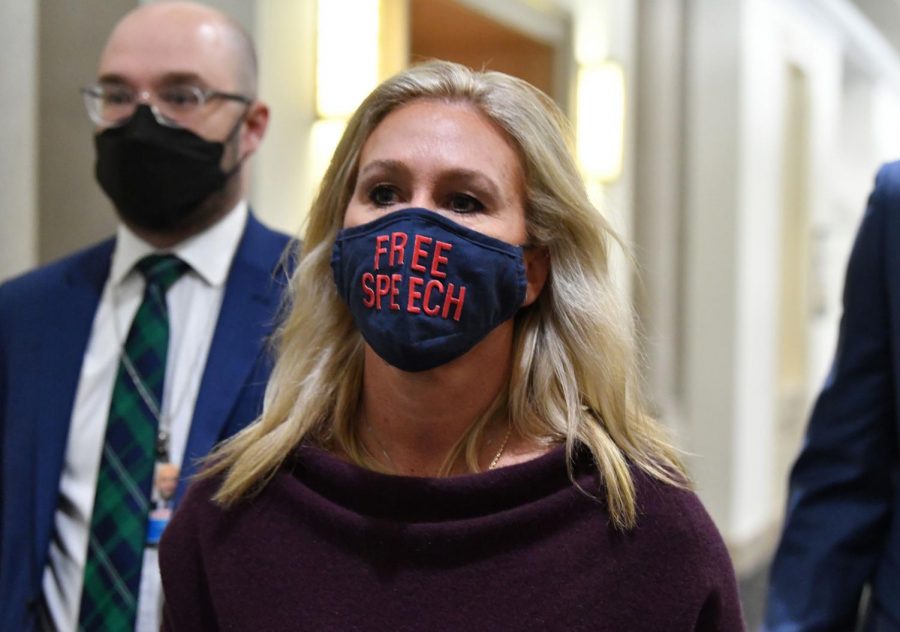 Rarely does one consider education as an obstacle, yet in the case of crouching beliefs and polarization, hyper-education has become more of a flaw in society than a feather in its cap.

Education — at its core — is designed to free one’s mind and liberate it onto a field of bountiful opportunities. However, in a world where access to information and education is more accessible than ever, one’s ability to filter their education has opened a disillusioned and polarized Pandora’s Box stonewalling society.

Additionally, when one criticizes those who influence fringe conspiracies — such as QAnon — as mere ignorant collectives, one relinquishes the acknowledgment of the higher education behind those who lead and enable these schemes.

A notable misconception arising from those criticizing Republicans for their gradual compliance with QAnon and its congressional representative Majorie Taylor Greene is that the GOP is now forced to divide their base between “uneducated” and “educated.”

Earlier this week, Democratic Congressional Campaign Committee’s new chair, Sean Patrick Maloney, exclaimed to Politico, “They can do QAnon, or they can do college-educated voters. They cannot do both.”

Disturbingly — following only 11 Republicans voting to strip MTG of her House committee assignment — Republicans appear to forgo any decision for now and allow their broad, fragile tent to extend a bit further.

MTG — a business graduate from the University of Georgia — certainly knows better; her “apology” consisting of projecting her wrongdoing onto other outlets (in this case Facebook) reflects an intuitive technique conspiracy influencers use of yielding, “Well, I was just curious.”

Even those who peddled other election conspiracies, primarily Ivy League Senators Josh Hawley and Ted Cruz, received their educations at some of the world’s most prestigious institutions, yet empowered a disastrous insurrection in the country.

Framing the reason for surging conspiratory Republicans on a lack of education is not the entire picture, and, particularly, for liberals to paint those such as MTG to be “white trash” is dishonest, unnecessarily frivolous and overlooking the larger problem at hand.

In a recent dive by The Atlantic into the insurrection arrestees, researchers Robert A. Pape and Kevin Ruby discovered that of the 193 arrested, “40 percent are business owners or hold white-collar jobs,” while only nine percent were unemployed.

Although certainly, a lack of education may have had an impact on the lives of those caught in conspiratorial winds, the question begs whether those with these higher educational levels truly knew no better, or did they knowingly surround themselves within a comfortable, informational echo chamber leading them down this rabbit hole.

In the information age, hyper-education and partisan confirmation bias have become more of a burden than a blessing for the prospects of a progressive, great society.

On the one hand, when one achieves this higher education, he or she is better equipped to scour for information supporting his or her beliefs. On the other, living in an age where one never wants to appear misinformed, educated individuals now have better means to find information specifically fitting their narrative.

Hypothetically, pair an individual with fragile self-esteem with a higher ascertainment of education, and voilà, one arrives at the present debacle where certain people’s defense mechanisms distort reality to comfort and feed their frail egos.

Education is and always will be a liberating means for those seeking social mobility in society. It is those, however, who manipulate and weaponize their cognition and conclusively damage society all to shield their self-esteem.

Accepting the truth is always difficult, whether it is physically, mentally or socially daunting.

Still, one does not hold the key to suddenly condescend others or construe their own realities once attaining better education.

Psychologically, it is described as weak human behavior for individuals to cover up their inaccuracy with incessant lies. Moreover, if there ever is to exist a great society, it will require recognition and seclusion against those who continue their fabrications and knowingly mislead.

Irish literary genius James Joyce once surmised, “We are living in a sceptical and, if I may use the phrase, a thought-tormented age: and sometimes I fear that this new generation, educated or hypereducated as it is, will lack those qualities of humanity, of hospitality, of kindly humour which belonged to an older day.”

As noticed by Joyce, the issue of hyper-education ironically leading to miseducation is not a contemporary conundrum. Nevertheless, Joyce’s assertion of hyper-education’s misgivings paints a portrait of humanity’s fragility: Humans are vulnerable creatures, and their first inclination when appearing wrong is to deceive themselves and condemn others.

Hyper-education, placed with delicate egos, are weaponized daily and obscure other, more admirable human qualities “of hospitality” and “kindly humour.”

Education is for those who can keep it, and it is every individual’s responsibility to seek the truth no matter how difficult it may be. Today and every day, hyper-education must be administered for societal good  — nothing more and nothing less in an era where corrupt motives and coverups bunker society’s progress.