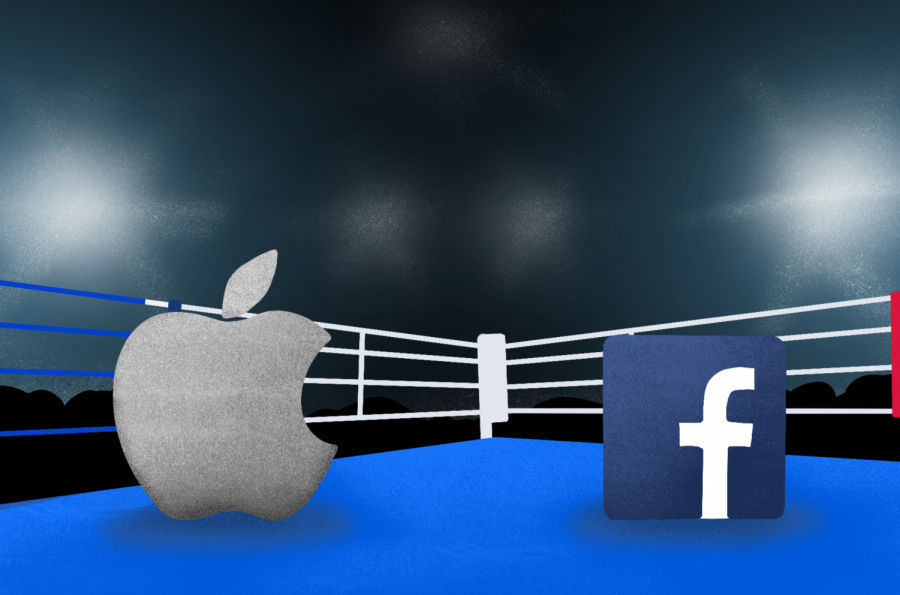 Amidst the sound and fury of a raging pandemic and incoming administration, tech industry juggernauts Apple and Facebook’s bitter, vulgar battle is approaching its sour finale over consumers’ data.

Whether it has been Facebook purchasing full-page ads in various newspapers, or Apple’s CEO Tim Cook repeatedly criticizing Mark Zuckerberg’s negligence for consumers’ privacy, the bar fight between techs’ behemoths is entering its apex as both prepare their landmark decisions.

As captivating as a quarrel between a two trillion dollar tech conglomerate and an approaching one trillion dollar social media organization may appear, it must also be acknowledged that this heavyweight fight is missing a central referee in this imperative ring: the government.

This brawl began when, in 2014, following the iCloud hacks of celebrities’ private photos, Cook established Apple going forward as a company driven by protecting customers’ privacy. In addition, Cook reassured consumers Apple’s main focus was on securing this privacy, not — as Cook described the likes of Google and Facebook — to profit “by collecting gobs of personal data.”

Shortly after, Zuckerberg responded — with the interviewee describing Zuckerberg as notably irritated — in lambasting Apple for the expensiveness of their products. Zuckerberg also asserted that Facebook’s “advertising business model” in no way translated to Facebook “being out of alignment” with their customers.

Assuredly these transgressions of the internet and tech industry of 2014 can be characterized as greener, fonder pastures. It was not until 2018’s Cambridge Analytica scandal which forever set the tech leviathans into their present predicaments.

In 2018, news broke of a colossal data breach in which 87 million Facebook users’ data — majority American — had been improperly obtained by the political data-analytics firm Cambridge Analytica: a consulting firm which targeted voters based on psychological analyses excavated from online profiles.

In conjunction with the breach, it was discovered that the scandal implicated online “personality quizzes” when users granted access to their profiles before further taking a psychological survey.

At the time, when Cook was questioned on how he would respond if in Facebook’s position, Cook responded he would never be in the dire situation anyway. Cook, thereafter, criticized Facebook’s further profiteering and negligence of user data adding, “The truth is, we could make a ton of money if we monetized our customer — if our customer was our product.”

Reportedly Cook’s comments inflamed Zuckerberg so much so that he immediately ordered his employees to switch from iPhones to Androids.

This dogma of the customer as a product further drifted Apple into supporting users’ privacy, culminating in their conclusive aggression against Facebook: iOS 14 and an update to the IDFA, i.e., the identifier for advertisers.

Along with the iOS 14 software update for iOS devices, Apple will now allow iOS owners to control their own IDFA.

Up to this day, the IDFA has been used for advertisers as a notification system to which advertisers can track an iPhone, iPad, etc. and “precisely target and track users within apps on iOS devices” — Google/Android’s version of this being AAID (Android Advertising ID) and GAID (Google Advertising ID).

With iOS 14 being released last September, the company delayed their comprehensive change to IDFA, and rather punted the impending change to sometime early in this year.

Even if iOS users are fortunate to have a company belatedly care for their personal privacy, Apple is no hero in a fight between the lesser of two evils. No matter if Facebook were to change their business model, or Apple successfully incentives the personal data industry, the missing referee in this ring will have to be the government and compelling legislation.

Consumers need data protections under law, not provisional shelter under the conditions of a food fight between Apple and Facebook.

As the Brookings Institute underscores in their formulation for future US privacy laws, currently the tech world is only guided by European and Californian tech guidelines as the government lacks any federal law protecting privacy.

Likewise, the Council on Foreign Relations suggests a streamlined federal approach in cybersecurity that enables the law to protect not only individualistic personal data, but also national security information as hacks and breaches have been far more widespread and debilitating.

It is an insult that two colossal tech companies are publicly boxing over everyone’s personal data. Even more so, in the absence of any law it is personal data is fair game for any tech monolith craving unethical profits.

Apple and Facebook’s battle has waged long enough; the government’s responsibility as a referee safeguarding the gold of the twenty-first-century — personal data — is long overdue and needed more than ever.

As previously accomplished countless occasions before, government intervention on behalf of the consumer — not for good PR, a punch to an opposing company or malfeasance — must develop if the tech industry is to remain protected for all.