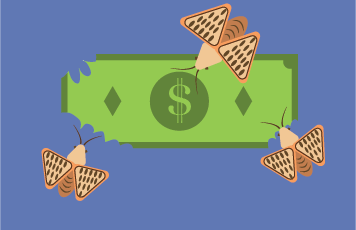 As the COVID-19 pandemic continually hurts the U.S. and global economy, central governments are drafting and carrying out their relief plans one after another. While many people are splurging the free checks they receive, we need to calculate how much irresponsible fiscal and monetary policies could cost us more in the future.

Money has never been as cheap as it is right now. To support the U.S. economy during the 2008 depression, the Federal Reserve Board lowered the Federal Funds Rate to the floor, only slightly above zero. Meanwhile, it started to expand its balance sheet, or, more colloquially, it printed dollars.

On the one hand, the low-interest rate and quantitative easing have ignited the equity market. While the median hourly earnings of wage raised from $12 to $15, SPY, the exchange-traded fund tracking S&P 500, the index covering 500 public companies most representative of the U.S. economy, has nearly tripled after adjustment. Concomitantly, the inflation-adjusted median house price has also quietly climbed back to the peak it achieved in 2005, shortly after which there came the subprime crisis.

On the other hand, an interest rate on the floor and quantitative easing are often considered the nuclear weapon for extreme situations, and using it for a long time could eventually distort the market and create more severe problems. As Professor Harald Uhlig from Kenneth C. Griffin Department of Economics at the University of Chicago pointed out, no one foresaw these policies lasting this long at the beginning, and all policymakers are betting on a robust economic recovery as the way out — because they are left with no choices.

However, the U.S. economy has not been lifted as much as they expected, and, inevitably, the effectiveness of these methods would gradually become incapacitated. If the low-interest rate and expansionary monetary policies are like caffeine to keep people awake, vexatious troubles will arise when the tolerance is built.

Besides the macro overview, the substantial debt burden also diminishes the future. Before 2007, the ratio of federal government debt versus GDP had been controlled at around 60%. It then skyrocketed to over 100% in recent years, and irresponsible fiscal plans could only worsen the situation.

The Emergency Economic Stabilisation Act passed in 2008 cost the federal government $831 billion, or 32.3% of federal tax revenue of that fiscal year. But the CAREs Act passed last March together with the Consolidated Appropriations Act and the $1.9 trillion proposal on the floor of our senate would cost us $5 trillion totally, or 134% of estimated federal tax revenue in 2020.

As a person with substantial debt faces financial problems, so does a public institution. And the financial situation of the State of Illinois is a warning sign to both local and the federal government. Its debt ratio has climbed to ridiculous 468.7%, according to Forbes, indicating the de facto bankruptcy of the state; the ratings of its bond are slightly better than so-called junk bonds, pushing the borrowing cost even higher; while Illinois residents face one of the highest state tax burden and the worst economic outlook among all states.

Former UK Prime Minister Margaret Thatcher once said, “There is no such thing as public money; there is only taxpayers’ money.” Any attempt to spend the government budget irresponsibly is to flagrantly bet the future of our children, and children’s children; and any flashy proposal would potentially cost more in the future. Improvident monetary and fiscal policies are not means to bail out Americans — a balanced substantial plan is.