Opinion | Youth endures as the compass for dazed spirits 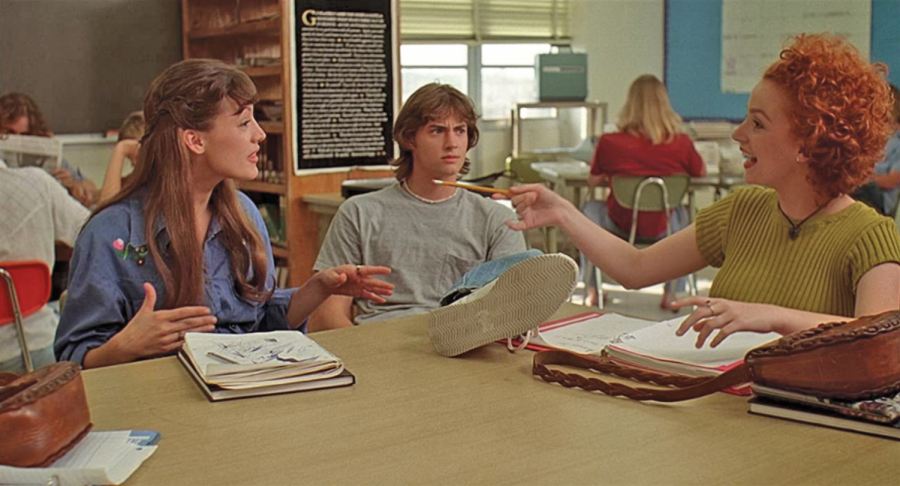 Marissa Ribisi, Michelle Burke and Jason London star in “Dazed and Confused.” Columnist Nathaniel discusses the film and its relationship with the fleetingness of youth.

Nature dictates youth as ever fleeting. Yet, in retrospect, youth in nearly every other cultural facet is depicted as a retreating state of mind: a disposition, frankly, under constant constraints by societal burdens.

Youth is a resource exquisitely bestowed to the human psyche, but it also represents the most fragile aspect of the human condition.

If youth capitulates in life’s most contentious moments — be it primarily staggering stress — the youthful resource is therein extracted and seldom survives outside an abiding individual.

Youth’s exceptionally combative occasions appear in its tense transgressions against exterior pressures. No better illustrations for these moments of youthfulness are exemplified than in bildungsroman films presenting portraits of pure youthful bliss in a single day.

Most notably, the films best equipped in this youthful endeavor are Richard Linklater’s “Dazed and Confused,” and George Lucas’s “American Graffiti.”

Both set in their respective director’s adolescent ages, Linklater and Lucas craft picturesque tales chronicling characters’ last hurrah for youth — youthful jubilees contradicting impeding age and life’s laborious fate. Nevertheless, each film captures a vivid snapshot that resembles a goodbye to primeful youth, but, in fact, is a window into the potential, glowing life one has with youthfulness in their soul.

Linklater’s “Dazed and Confused” captures the essence of the last day of high school and bottles this illusive substance into a dazzling motion picture.

Set in 1976, Linklater’s single-day account of youth arranges this treasured resource at a crucial crossroad for the characters as this disoriented cast ponders their summer and future plans. Following Randall “Pink” Floyd’s outset summer odyssey, youth reveals itself in the form of the boldly free-riding, laxed approach to life Floyd and company value.

The central thesis of “Dazed and Confused” revolves around hemp-inclined David Wooderson’s — remarkably played by Matthew McConaughey — pivotal guidance to Floyd in pressing, “Let me tell you this, the older you do get, the more rules they’re going to try to get you to follow. You just gotta keep livin’ man. L-I-V-I-N.”

With McConaughey’s beaming delivery, Linklater notes youth’s burial as one ages, including societal pressures integrating individuals “to try to get you to follow”, the Kafka-esque drum ever-beating for societal conformity.

The rebellion in this instance does not lie in youth resisting against a mellowed order of sorts, but rather the rejection exists in one renouncing youth and “L-I-V-I-N,” opting alternatively to a humdrum system in which youth is taboo.

This same directive rings true in Lucas’s “American Graffiti” set in 1962 California. In Lucas’s ode to the summer of ‘62, characters’ anguish for the future eclipses their realization that radiant youth and opportunity have been entirely with them in their quest for truth in maturity.

Accompanying summer’s final night, Lucas provides the audience a technicolor wonderland of youth’s eternal spring on the streets of southern California. Ironically, these characters on college’s cusp dread youth’s purported exit; their night of shenanigans assume as if youth will request its unbridled return at the stroke of midnight.

Youth’s dispute against merciless, imminent uncertainties exist both in characters’ anxieties for college, as well as Lucas’s representation for a youthful nation losing its innocence a year later — America capsized in 1963 by President John F. Kennedy’s harrowing assassination.

This pairing further elucidates youth as a liberating means for one’s mind — in youth, there is no trepidation for life’s potential fizzling.

In conjunction with “Dazed and Confused,” “American Graffiti” is an image springing with youthful freedom. However, where Linklater’s film culminates in youth’s triumph over the mundane, Lucas opts to display the incessant reality.

Suspecting youth’s calamitous conclusion and, in turn, fabricating a resistance, “American Graffiti’s” attentive characters remark of the titular character, Curt, “(he) just said at dinner tonight that he didn’t see what the big hurry was. He thought that he ought to stick around and go to (Junior College) for a while, and try and figure out what he wanted to do with his life.”

Curt’s inkling for suspending youth never manifests as he eventually does resolve to attend college. Still, Curt’s conviction for maintaining youth confuses adolescence with inaction and postponing life’s inevitable interruption — an unnecessary interruption when one already preserves a youthful soul.

Youth and inaction share no correlation, but when the dread of losing youth paralyzes individuals, inaction becomes the logistical conclusion to numb the panic of relinquishing youth. Mass culture advocates for youthful hearts, yet the common incentive remains for individuals to withdraw youthfulness and elect for more subjective sophistication and maturity.

Definitively, youth is the independent spirit free of subjugation and qualms.

Friedrich Nietzsche — the father of nihilism, not regularly associated with any joyful thought — haphazardly characterizes youthful spirits best when professing one “to become master over yourself, master of your own good qualities.”

In youth, one is master to none — subservient to parents and elders, naturally, but nonetheless autonomous of life’s later administrators.

There are many ways in which youth can fall adrift, yet there are seldom manners in which youth may retrieve its occupant. As demonstrated in “Dazed and Confused” and “American Graffiti,” the youthful spirit marches in its own rhythm — a rhythm endangered, still, at any potential peril.

Like any given resource, youthfulness requires an unabashed commitment and clear resolve in maintaining its opulence. However, life will never equally resemble the cautionary innocence exhibited in films like “Dazed and Confused” and “American Graffiti.”

Youthfulness, henceforth, becomes an individual’s responsibility to cherish and conserve in all its liberation and defiance of gravity: a recognition, not ignorance, of life’s ulterior influences to pester, to secure the enlightened, youthful spirit.