Opinion | Illini basketball has a chance to make University history 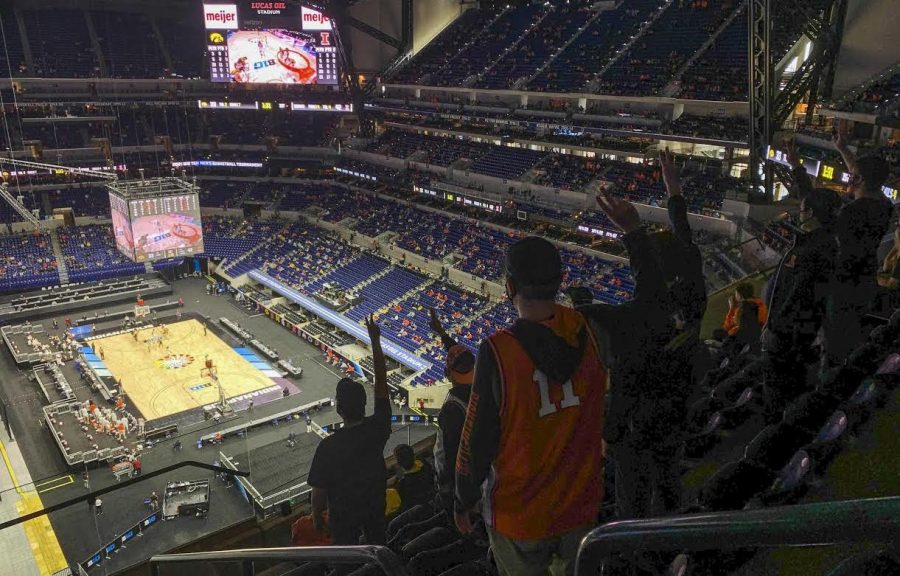 Fans at Lucas Oil Stadium in Indianapolis cheer on the Fighting Illini basketball team on Saturday. The team has a chance to make University history during the NCAA Big Ten Tournament.

When Brandon Peters threw a 5-yard touchdown pass to Daniel Barker with five seconds left in the game to secure their 37-34 victory over Michigan State, I was amongst the thousands of screaming Illinois fans. That day, on Nov. 9, 2019, Illini football had thus advanced themselves to a bowl game, the first time since 2014. Like everyone else, I couldn’t believe what had just happened.

Soon after, the thought of it all kept swirling through my mind. I had just witnessed one of Illini football’s greatest moments. Not only that, but it occurred during my time at Illinois as a student.

My mind led me to Illini basketball. If only they could achieve something that spectacular while I’m a student. By the likes of the current season, they are paving the way for what could be a memorable year for the team. They are making history.

With the Big Ten Tournament among us, the Illini have a great chance to play in the NCAA Final Four. And why shouldn’t they? They have earned every right to do so.

Throughout the 2020-21 season, the Illini have accomplished so much that makes every fan proud to wear their orange and blue. As a team, they currently stand with a 20-6 overall record and 16-4 in the Big Ten. Individually, guard Ayo Dosumu has earned himself two triple-doubles, two out of four in Illini basketball history.

It’s been an incredible season thus far. And it will only grow better from here.

There’s no doubt the likes of Lou Henson and his Flyin’ Illini team from 1989, Bruce Weber, Deron Williams, Dee Brown and others from 2005 are thinking about the current Illini team. I know I am all the time.

Achieving greatness in Illini sports history is fantastic. It’s even better while you’re a student at the time of its occurrence. For this and so much more, I am grateful every day to be an Illini.

However this year’s season ends, I will wear my orange and blue with pride.