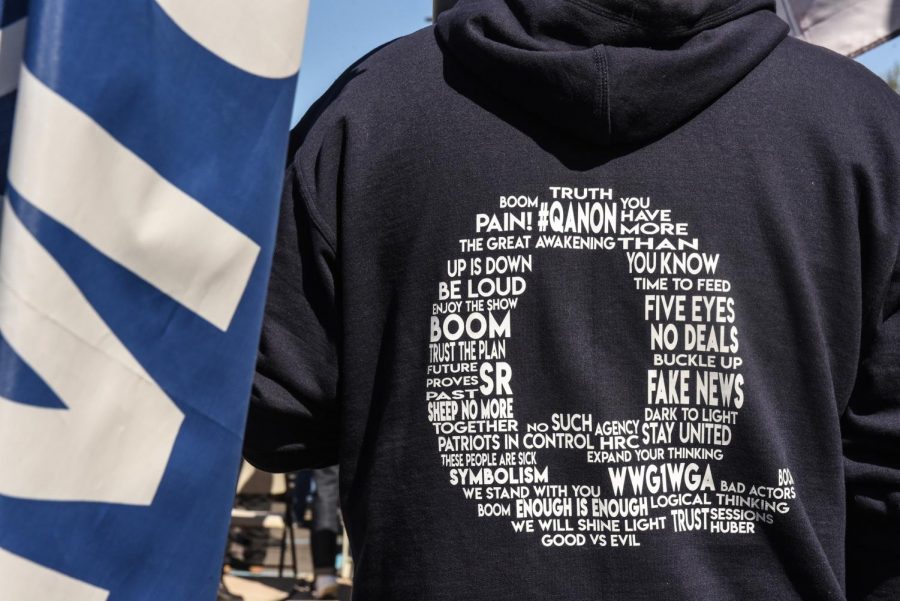 A person wears a QAnon sweatshirt during a pro-Donald Trump rally on Oct. 3, 2020, in the borough of Staten Island in New York City. Columnist Nathaniel Langley argues that QAnon recruits individuals who can’t make rash decisions due to large amounts of grief.

There exists hollow ground where profound grief and loneliness incentivize individuals to enlist in communities of conspiracies.

Most markedly within the outlandish QAnon conspiracy — the inept belief that the world is supervised by satanic, Democratic pedophiles — QAnon coerces permissive individuals into its deceitful embrace and promise of amicable company.

Certainly, there remain complex paths for one to plunge into the QAnon rabbit hole. However, those afflicted by crucial emotional factors — grief, alienation and anguish — demonstrate QAnon’s domineering siphon, compelling a person to acquire such outlandish beliefs.

Still, devious schemes like QAnon weaponize these specific desolate feelings to amass loyalty for their ulterior motives — further dividing fragile individuals away from any semblance of reality.

T. Nelson, a journalist at Vice, chronicled this tragic phenomenon when observing QAnon-related Facebook groups back in 2019, and frequently noticed the Q-inclined were, “elderly right-wingers who have gone too far down the online rabbit hole.”

Likewise, Nelson notably noted within this “online rabbit hole” that “almost every single member of Q’s following seems to have one glaring and unifying trait: they are deeply, heartbreakingly lonely.”

Susceptible to this lonely-rabbit hole by way of their aged, reclusive state — aggravated only more by the present pandemic — loneliness and social isolation, as articulated by the CDC, is a gateway for troubling physical and mental health complications.

Citing a comprehensive report on social isolation’s effects, the CDC connects loneliness with “higher rates of depression, anxiety and suicide.” Incorporating insufferable loneliness with a “plugged-in” older generation, and the aforementioned outcome is the elderly enticed by an online collective of “patriots.”

With their steadfast passion and resolve for forwarding QAnon’s frenzied fiction, these dedicated “elderly right-wingers” have isolated themselves not only from all reality but as well as beloved family and friends who cannot sustain the illogical convictions surrounding their cult-community of conspiracies.

In a feature detailing the socially disruptive tendencies of QAnon, Quinn Meyers of MEL Magazine indicated the common rebuttal from “Q-Shepards” who commonly contend, “for those who say their family won’t speak to them any more: ‘We are your family now.’” Meyers also demonstrated one account of a man beholding QAnon consume his girlfriend, and equated the grief-ridden rabbit hole as “like losing a loved one to drug addiction.”

Besides the harrowing factors influencing conspiratory rabbit holes — specifically, enraged media — nothing can match the subsequent grief of losing a loved one to a confining cult of conspiracy; this dreadful fallout appears as a dedicated symbol to the “Q-cause” who gloat losing their relationships.

QAnon presently prevails without its inefficient commander: former President Donald Trump. Those who question how a conspiracy lacking a peddler persists must understand that this phenomenon is more a cloistered company of conspiracists than a grand insight into a “global cabal” propagated by Trump.

Emma Bowman, a journalist for NPR, insists that following the cataclysmic Capitol insurrection, the QAnon cultists are no less incentivized than before. Describing the failed prophecy of a Hollywood-like coup for President Biden’s inauguration, Bowman remarks, “the QAnon community has survived multiple unrealized predictions preached on internet message boards since 2017.”

Bowman additionally taps the premier QAnon authority, journalist Travis View, who disputes the foundation of QAnon’s intensity not to originate in Trump, but rather, “It really is about the community and the feeling that they have some sort of inside information about what’s going to happen, so there’s really no head of the snake.”

This sentiment of acquiring “inside information” fuels this unhinged pursuit for a truth that does not exist. A demented inquiry, nonetheless, epitomizes QAnon detaching individuals astray from sensibility.

One of the more melancholic corners of the internet lies with Reddit’s “r/QAnonCasualties.” With over 143,000 members, “r/QAnonCasualties” stands as a genuine community for those afflicted from losing their dearest.

In an article for Newsweek, Jon Jackson expands on Reddit’s accounts and begins by recounting one such story of Susan and her mother.

Susan’s mother wistfully capitulated to the irresponsible void that is QAnon. In an additional letter to Newsweek, Susan illustrated, “the mom as I remember will probably never be seen again. She is forever lost in this realm of fantasy and drama.”

This agonizing acknowledgment for QAnon’s toll on personal lives is revelatory in comprehending the exhaustive sorrow besieging all facets of a conspiracy theory.

Susan’s supplement of modern, digitally-driven grief is merely one recent introduction to these contemporary, conspiracy conundrums.

Grief regularly overrides one’s senses of rationality, yet, it is by way of shrewd conspiracies like QAnon where gloom and isolation are continuously harnessed against one’s own family, friends, and — as profoundly exhibited on January 6 — democratic society.

Apart from false promises of finishing all societal ills, QAnon’s greatest detrimental assurance lies in its commitment to its counterfeit community.