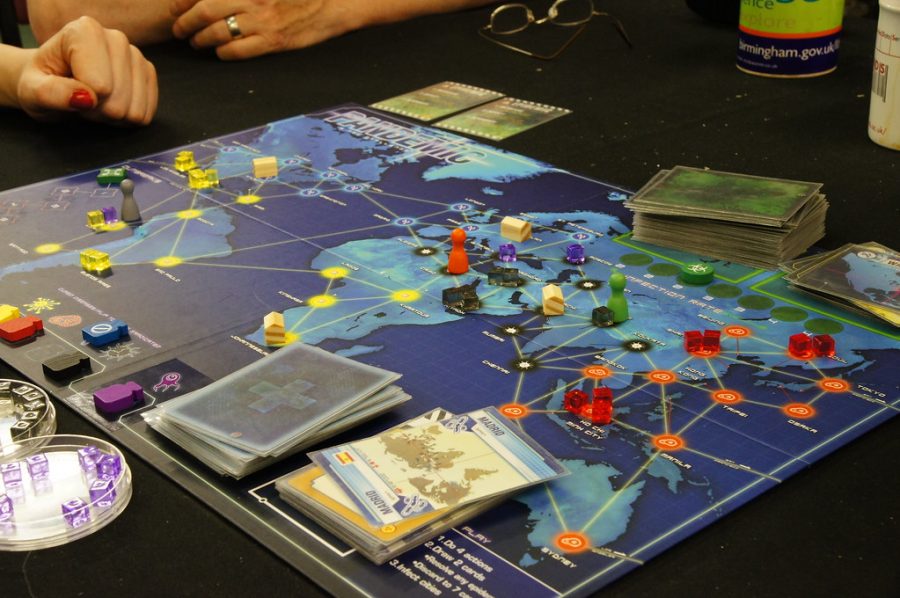 The board game “Pandemic” sits on a table surrounded by multiple players. Columnist Samuel Rahman argues that people should consider buying the game to keep busy in the midst of the pandemic.

Board game sales grew immensely in 2020 as the house-confined struggled to fill the time and fight against boredom during the lockdowns precipitated by COVID-19. Hasbro — the publishers of the “Monopoly,” “Connect 4” and “Clue” franchises, among other famous titles — saw over a 20% increase.

But there exists a very timely board game that exploded into more fame than most any other during the past year. Sales of 2008’s “Pandemic” designed by Matt Leacock and published by Z-Man games skyrocketed in 2020.

“Pandemic” sees players as various Centers for Disease Control and Prevention employees globetrotting to stymie outbreaks of contagious diseases and find cures before epidemics threaten to bring the world to wipe everyone out. This is a cooperative game — everyone is on the same team and all the players win or lose together.

It’s understandable that such a game experiences such a resurgence of popularity during this time period. Early in the COVID-19 crisis, I considered persuading others to play “Pandemic” and use it as a topical gateway to the world of designer board games I so adore. Even more topical, a COVID-19 scenario was released by a third party — where your band of virologists can fight the titular disease.

But I am no longer certain if I will play “Pandemic” again for a very long time. The designer, Matt Leacock penned an opinion piece in the New York Times back in March 2020. He argued his game could provide a stripped-down model of a crisis for the public.

Leacock writes, “Board games have comparatively low stakes, but I’ve learned they have much to teach us: We all need to play to our strengths, balance short-term threats against long-term goals and make sacrifices for the common good. If we can communicate, coordinate and cooperate effectively we might better overcome this uncaring, relentless and frightening opponent.”

Those sentiments were shared over a year ago and much has changed. When the U.S. harbored a couple hundred cases, I agreed with him.

But as of right now, almost 10% of the U.S. population has contracted COVID-19 at some point and 550,000 Americans have died. I have classmates at the University who have lost parents to the virus. I can no longer generally recommend a game that simulates an event that caused so much damage.

I am certainly aware that this topic of losing a board game to a pandemic sits on the lowest possible rung of importance given the current issues the public faces.

If you enjoy playing the game or still want to try it for the experience, by all means, go ahead and play on. “Pandemic” is one of the most successful games of all time and produced a plethora of expansions and alternate versions.

One version currently sits as the number two position of greatest games of all time — as concluded by the authority of the industry, BoardGameGeek.com. If you decide to play something from the Pandemic series — given everything we have gone through this past year — I recommend one of the alternate theme versions such as the Fall of Rome, Cthulhu or the Cold War instead of the base game. I know that’s what I’ll be choosing to play.