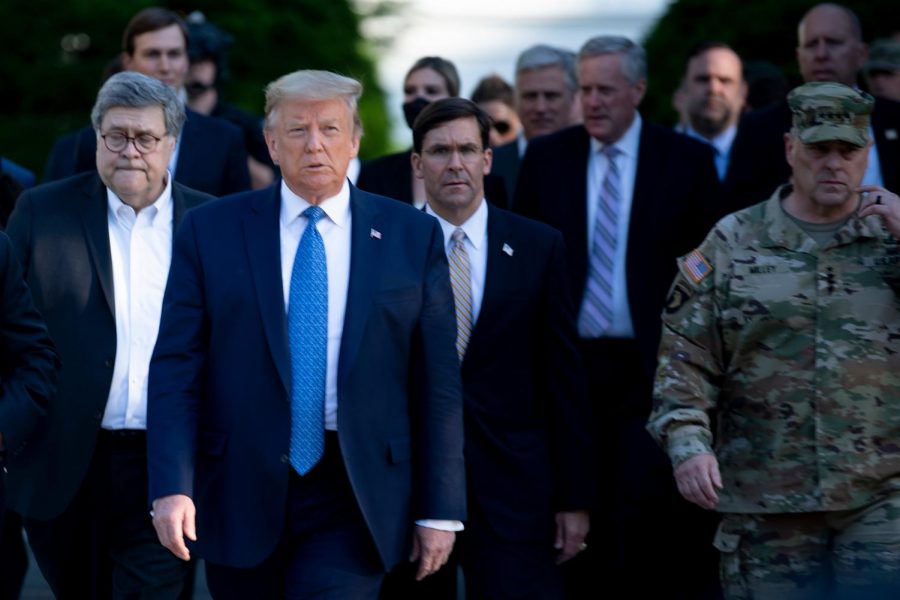 Former US President Donald Trump walks with his team from the White House to visit St. John’s Church after the area was cleared of people protesting the death of George Floyd on June 1 in Washington, DC. Columnist Dennis Austin argues that Trump promotes white supremacy and encourages bad behavior.

Americans suffer under the influence of white, conservative, evangelical preachers: Jerry Falwell Sr., John Hagee and the clown cavalcade of immoral and unethical charlatans who prey on the naïve and ignorant.

The Christianity preached by these men claims if you pray hard enough, tithe constantly and adhere to biblical teachings, you can reap God’s benefits.

Donald Trump, much like these heathens, employed the same tactic. Grandiose promises only if you abide by him and his ideology, no matter how egregious they may be. Much like his religious counterparts, his promises often fell short, if not entirely, placing blame on external factors rather than looking inwardly at his failures.

Thus, it should not come to anyone’s surprise 75% of white evangelicals supported him. They believe Donald Trump is a righteous man doing the Lord’s work.

To anyone else outside of this delusional space, we see their shameless exploitation. There is much to say about the inherent ridiculousness of politics and religion. You must meet certain conditions to earn the favor of party and deity — exemplary of an abusive relationship. It is difficult to ignore the parallels of these corrupt and soulless religious quacks with an equally corrupt and soulless former president.

It’s hard for me to believe that Jesus Christ, if alive (and real), would approve of this tyrant, but many so-called Christians seem to grasp his every word.

In their world of make-believe, Donald Trump was the last great hope in preventing America from embracing its inevitable progressive future. To them, it was gay rights, trans rights, Black Lives Matter, immigration and women’s rights as tenets of deviance; proof the world is turning away from God and into fictitious Satan’s arms.

Much like these pastors, Donald Trump exuded a great deal of confidence. While pastors point to the Bible as the reason for their riches, Trump points to his sketchy business dealings. To me, there is no difference between the Bible and Trump University. Both are equally outrageous tools used to deceive their audiences for profit.

There is something to be said when pastors of megachurches depart every Sunday in extravagant automobiles as some of their parishioners struggle financially during a pandemic.

Comparable to Trump, who promised his predominantly naïve, white working-class audience of riches as he drove off in his limousine. Trump, in many ways, reminds me of watching Benny Hinn as a child. Individuals and families lining up at the altar waiting impatiently to be blessed by the presence of this fraud.

Upon greeting him, he would “lay hands” on them, and they would fall backward, apparently overwhelmed by the blessing of God. As a child, I remember seeing this in awe — the magic of God’s healing abilities.

When I reached my teen years, it became a meme; symbolic of a bad acid trip. We saw this at Trump’s rallies. Instead of an aisle of congregants, it was an arena full (or half-full) of dumb, fearful white evangelicals desperately waiting for Donald Trump to assuage them of their fears of brown people and drag queens with a plea to restore Christianity in America.

It was the unrepentant nature of Donald Trump to do whatever necessary for securing these voters, even if it means looking like a bumbling fool when holding a Bible, as his own military attacked peaceful protesters in the background.

From my time in youth Bible study, I learned to stray from selfishness and greed, as the scripture preached these values to be self-destructive. One passage comes to mind: 1 Corinthians 6:10 reads, “nor thieves nor the greedy nor drunkards nor slanderers nor swindlers will inherit the kingdom of God.”

How could these self-serving Christians logically interpret his manipulative, racist, egomaniac, xenophobic behavior as Christ-like?

Perhaps, I answered my question. We are talking about a segment of the country that believes a woman can give birth absent penetration. Unless the Virgin Mary had some form of in-vitro fertilization before it became medically possible in later generations, we must accept the reality that these people reside in fool’s paradise and are intellectually challenged.

We can see that their support of Donald Trump, while rooted heavily in unlettered religious dogma, lies in what he stands for. It is not a mystery why those that claim to be followers of Christ would choose to participate in the same worship of a man in which the Bible fervently opposes.

It is a rejection of modernity and perceived “threats.” It was not the false prophet who occupied the White House for four years; it was homosexuality, feminism, and social justice that sought to undercut the fabric of American society.

We can understand why so many of his rather unintelligent and imbecile supporters mourned his departure from the seat of power. To them, the pinnacle of American life is of a time when gays were stigmatized, Blacks criminalized, women embraced submissiveness and toxic masculinity ruled the day.

The Trump presidency, defined by white supremacy and tolerance of oppressive religious doctrine, is democracy to these evangelical mouth breathers. It is this doctrine that brings white, evangelical Trump supporters together, arms linked in defense of their unscrupulous pastor.