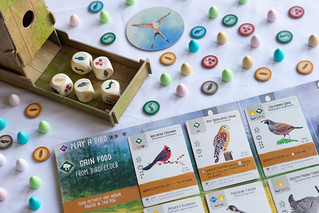 The board game “Wingspan” is laid out on a table ready to play. Columnist Samuel Rahman argues that it’s time to stray away from the classics and start playing modern tabletop games.

To most people, the words “board game” conjure up images of “Monopoly,” “Clue” and “Sorry” — fond or torturous moments from childhood. To those more in the know, maybe games like “Catan” or “Risk” — games about settling an uninhabited island and competing militaries’ quests for world domination, respectively, pop into mind.
I would never mean to put down another’s enjoyment or experience with such games, because enjoyment is all that really matters. But, for those who have more jovial memories, I can only entice that more amusement awaits. And to those who range from apathy to utter distaste for the medium, give this new era of games a chance.
What is this new era, though? This requires dividing the history of tabletop games into the pre-Kickstarter and post-Kickstarter periods.
Launched in 2009, Kickstarter is a crowdfunding website where creators can upload proposals for projects — movies, kitchenware, books, tech, games, etc. — and ask the general public for the funds necessary to create said project. The creator receives the money and, after months of production, the project’s supporters receive the item they essentially pre-purchased.
With Kickstarter, small-time game designers did not have to secure contracts with large publishers such as Asmodee, Fantasy Flight Games, Days of Wonder or the other couple dozen lucrative industry pillars. These designers began taking their concepts straight to their intended audience via Kickstarter and raised incredible funds.
Selling directly to customers and ensuring a customer base preceding production allowed designers to keep a greater percentage of revenue by eliminating middlemen, which opened room for more audacious creativity.
Currently ranked as the number one board game of all time (by the agreed-upon industry authority — BoardGameGeek.com), “Gloomhaven” originated in 2017 on Kickstarter. That game’s sequel, subsequently, broke the record for most money raised on a single Kickstarter campaign — 12.9 million dollars. Modern board games are not “Monopoly.” Now, we’re talking about legitimate coinage.
The industry’s democratization — thanks to Kickstarter — lifted first-time designers into prominence, raised the standards and expectations of what games should provide and liberalized any previously constrained design space.
I also, notably, exclude “lightweight” and party-style games such as “Exploding Kittens” or “Cards Against Humanity” that rose to prominence via Kickstarter. The most obvious change in the industry evolved the medium and heavy-weight games — the next step a person could take after playing a game like “Catan.”
The modern era pushed this subsection of games into ones with incredibly high production value, immaculately commissioned artwork, quality tactile components, innovative game mechanics and narrative worldbuilding. A modern-era board game is an experience.
Three such examples include “Wingspan,” “Fog of Love” and “Root” — although there are not many titles you can go wrong within the top 200 of BoardGameGeek.com’s rankings.
“Wingspan” is a 2019 game that imagines players as “bird enthusiasts — researchers, bird watchers, ornithologists, and collectors—seeking to discover and attract the best birds to [a] network of wildlife preserves.”
Players roll hefty wooden dice, place brightly colored eggs with their foul and attempt to create a tableau of beautifully illustrated species with various abilities. Wingspan immerses players in a beautiful engine-building game and won nearly every award in its year of release.
“Fog of Love” is a 2017 game that immerses two players into a romantic relationship from a meet-cute leading to a break-up or happily ever after. Players maneuver the general events that accompany being a couple — choosing where to go for dates, arguing with in-laws, keeping secrets and an argument or two.
As a bonus, the rule book is unnecessary as the game explains itself to you in little bit-sized cards you read during your first play. If there ever was a couple’s modern board game, this is it.
“Root” is a 2018 war game of cartoon woodland animals battling over dominance in the forest. The trick is each player helms a species of animals who play the game differently — the bureaucratic birds attempt to keep their government from collapsing, the cats try to construct a variety of buildings and a rag-tag group of rebellious mice wage guerilla warfare to defend their home.
All three of those titles would not exist if it were not for the Kickstarter revolution that ushered in this new “modern” era of tabletop games. Everyone should try at least one modern board game — if for nothing more than a single exposure to the best of what board games have become.

Samuel is a junior in LAS.
[email protected]