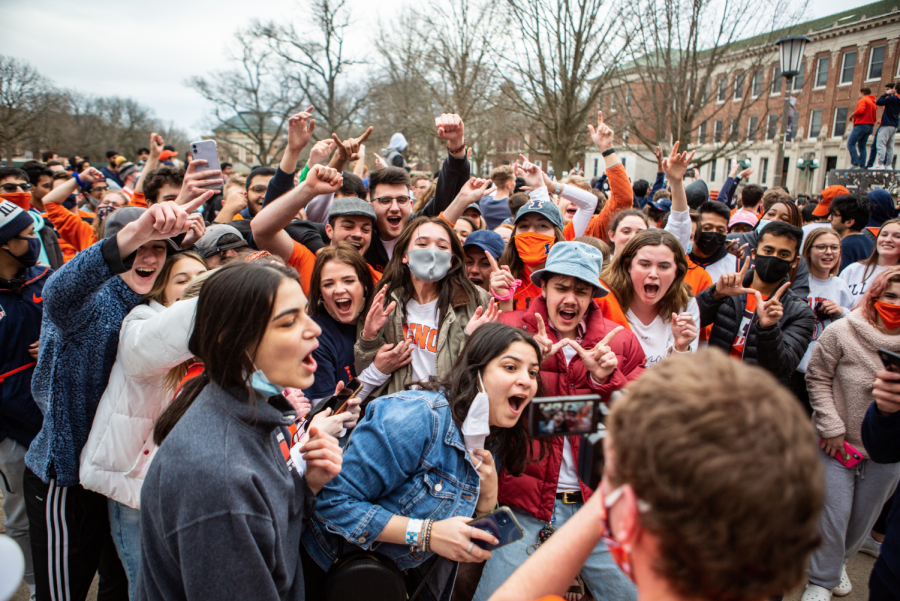 A group of University students crowd around a videographer on the Main Quad after the Illini basketball team won the Big Ten Championship on March 14. Columnist Nick Johnson argues that Illini basketball fans shouldn’t be worried for next season because Brad Underwood is prepared to build another winning team.

For many Illini fans, this succession of disheartening events warrants immediate trepidation — but one must be wary to not mash the panic button this early.

Following an uncharacteristic eight-year NCAA Tournament drought, the University’s basketball program finally rediscovered its sea legs in dramatic fashion, securing a number one tournament seed and finishing as the second-best team in the nation per the final AP poll of the regular season.

To watch such a thrilling comeback season and Ayo’s tenure in orange and blue crash and burn the way it did was devastating, as was the sequence of events that followed and is the likelihood that AP All-American Second Team center Kofi Cockburn may declare for the draft as well. However, given the uniqueness of the impending offseason, fans need not presuppose doom for the Fighting Illini next season.

The 2021 college basketball offseason will be notoriously known as the “transfer offseason.” Prior to this year, NCAA basketball players who desired to transfer from one school to another were required to sit out their first season at their new school after completing the transfer.

In an effort to alleviate the complications wrought onto the collegiate athletic world by COVID-19, the NCAA has decided to allow a waiver that permits one-time transfers for the 2021-2022 season. What this decision means is, just for this offseason, college basketball players may transfer schools and entirely avoid the obligation to not play their first season in a new uniform.

The response has been striking, as there are presently over 1,000 college basketball players in the transfer portal just days after the NCAA season concluded. While Miller’s likely departure began the offseason in a way Illinois fans did not desire, the unprecedented field of available talent will provide a remedy to Illini basketball’s woes.

Illinois basketball has already tapped into the transfer portal and greatly bolstered their frontcourt with the addition of Omar Payne, a 6’9 forward and former four-star recruit who spent his last season as a Florida Gator. Given the uncertainty of Kofi’s future at the University, adding an athletic stretch forward who can fill the hole left by Giorgi Bezhanishvili’s departure and also play up to the five spot should Kofi depart will prove to be paramount for Coach Underwood’s squad.

Additionally, Illinois basketball has just received a verbal commitment from high school junior guard AJ Storr, who will join four-star recruits Ramses Melendez and Luke Goode in what is shaping up to be a formidable 2022 Illini recruitment class.

It also cannot go unnoticed that Storr is high school teammates with TyTy Washington, a current high school senior who is ranked as the number three point guard recruit in the nation and is still looking for a college basketball program to call home.

Washington verbally committed to play at Creighton University last season, but has reopened his recruitment following the suspension of Creighton head coach Greg McDermott for racially insensitive remarks. The University of Illinois is presently listed as the frontrunner to land the star guard, as they were considered to be the runner-up in the Washington sweepstakes last fall.

While one cannot assume his current recruitment aspirations mirror those he possessed last autumn, knowing Washington has expressed serious interest in playing for Coach Underwood and his retweet of excitement to the news of his teammate’s Illinois commitment is plenty of reason for Illini fans to be rationally hopeful.

To make matters even brighter, University of Massachusetts’ star center Tre Mitchell has also entered the transfer portal. Mitchell — who averaged 18.8 points per game at UMass last season — was heavily recruited by Coach Underwood coming out of high school and has reportedly been encouraged by recent talks with the Illini coaching staff.

Did the 2020-2021 Illini basketball season end the way fans would have liked it to? Absolutely not. Did the 2021-2022 offseason commence with welcome news to Illini nation? Again, hard “no.” In spite of how things may appear at present, fans cannot turn a blind eye to the immense potential of this offseason’s unique transfer portal to fill the existing holes in the Fighting Illini’s roster.

Contrary to what many bleak headlines suggest one to think, the future of Illinois basketball is incredibly bright. All fans must do now is remain patient, trust Coach Underwood and the reputation he was able to reestablish and wait for more readily available talent to flock to the once again immensely enticing basketball destination that is Champaign-Urbana.