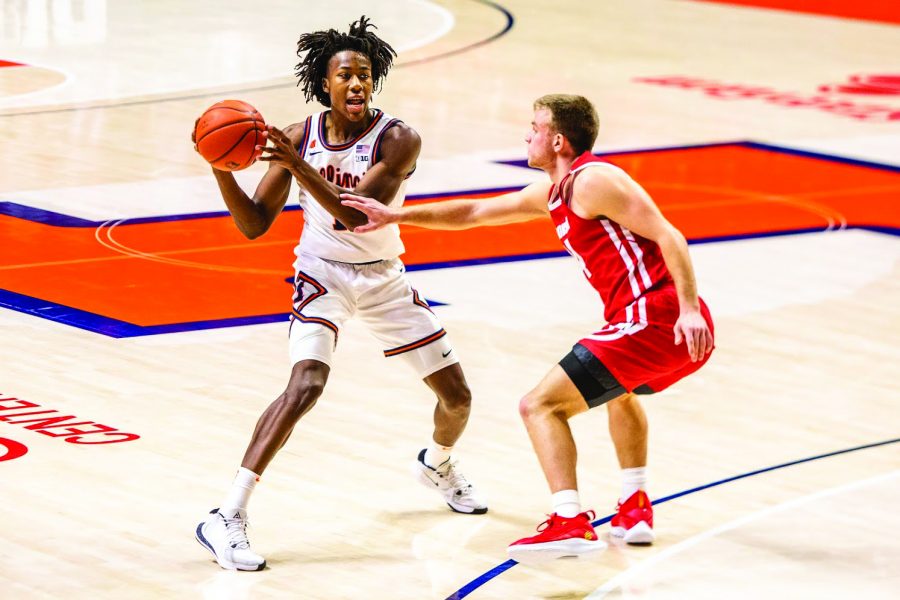 Junior Ayo Dosunmu looks to pass during the game against Wisconsin on Feb. 6. Columnist Matthew believes NCAA players like Dosunmu should be allowed to be compensated with more than just tuition by colleges.

As a season of dominance by the men’s basketball team came to a heart-wrenching close in Indianapolis, the fight over student-athlete compensation continued in the nation’s other highest court.
The Supreme Court recently heard arguments in the ongoing case of NCAA v. Alston, concerning whether the NCAA violated federal antitrust laws by prohibiting student-athletes from receiving education-related payments above the cost of attendance.
The Supreme Court appears likely to side with the athletes, rightly swatting away arguments by the NCAA that such payments would compromise the integrity of amateur play.
The keystone of the NCAA argument is their dedication to upholding amateur play. They argue that educational-related payments would definitively transform their athletes from amateurs to professionals. This would put them in direct competition for viewership with leagues like the NBA and detract from their dedication to amateur student athletics.
The educational-related payments the athletes seek aren’t six-figure salaries. They’re more concerned with graduate school scholarships, laptops and academic tutors. These payments are completely unrelated to the NCAA’s recent move to allow players to manage and profit from their name, image and likeness in deals with third-party companies.
The NCAA’s argument relies on a very shallow perspective of what constitutes a professional athlete.
The justices had little sympathy for the NCAA, pointing out the substantial amount of money revolving around college sports. March Madness alone is projected to make $800,000,000 annually, constituting 72% of the NCAA budget.
Universities receive massive amounts through the NCAA’s revenue, and television providers make billions off ads. Why should the student-athletes who draw the crowds be denied a share of the pie to further their education?
Justice Thomas thought it was strange that the coaches for these so-called amateur teams regularly fetch multi-million dollar salaries, becoming the highest-paid state employee. Since Lovie Smith’s departure, Illini men’s basketball coach Brad Underwood stands atop the University payroll making a smooth $3,408,000.
The NCAA is fully aware of athletes’ earning potential: the justices observed colleges spending tens of thousands on insurance policies for athletes in case they get injured before going professional.
The only logical purpose of this insurance is to keep the students in school longer. Justice Alito noticed that despite the NCAA’s dedication to the education and long-term success of the athletes, they have a noticeably low graduation rate. They are seemingly used for school profit, then discarded to the side.
Players like Ayo Dosumnu, departing for the NBA, are the exception rather than the norm. Most college athletes will never go professional, they play for their enjoyment and to further their academic opportunities.
If the NCAA was truly committed to the long-term success of their current players, they would be fully accommodating of colleges that desire to finance the academic interests of players in any shape or form.
At root, college sports are not meant to turn a profit. Only five of 90 NCAA national championships manage to turn a profit. The real aim is to enhance student life and the sense of campus unity.
When the men’s basketball team beat the Ohio State Buckeyes in overtime at the Big Ten Tournament, the roar of the ocean of orange chanting I-L-L was deafening. Attending that game in person was a huge morale boost for the roommates and me that made the road trip after a dreary year of lockdowns.
It is past due that the NCAA gives colleges the freedom to continue giving educational resources to the athletes that brighten college campuses.
The Supreme Court is right to question the NCAA’s amateur defense. Given Justice Brett Kavanaugh’s experience coaching his daughters’ basketball teams, one can only hope the decision will be a slam dunk for student-athletes.

Matthew is a junior in LAS.
[email protected]