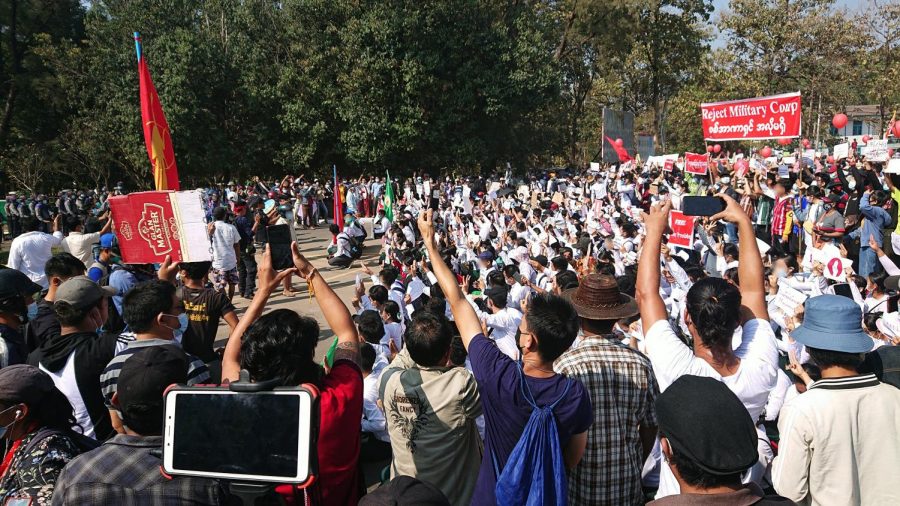 The Student Union, along with many teachers, protest against a military coup in front of the State Government Office in Hpa-An, Kayin State, Myanmar on Feb. 9. Columnist Eddie Ryan argues that suffering Burmese deserve stronger solidarity.

Just two months have elapsed since the jarring and demoralizing military coup in Myanmar. In the short time, one hasn’t had to look far for footage of unfeeling repression set against bloody but valiant resistance; nor has it been easy to ignore the flagrant, vile stain blotted on the southeast Asian subcontinent more indelibly with each civilian death.

If the tenacity of these weary liberty seekers hasn’t yet impressed itself upon the public, whether through images of resolute three-finger salutes, or of children throwing stones and bottles at junta soldiers from behind makeshift barricades, then perhaps an account of Myanmar’s long, gasping struggle for democracy will.

This is the nation where George Orwell learned to despise Britain’s oppressed colonial subjects for their dark skin and where he subsequently underwent the arduous process of educating himself out of this inculcated racism. Yet, while Orwell managed nearly to purge himself of the colonial psyche, its vestiges have lingered for the populace.

Emerging out from under British auspices in 1948, Myanmar — or Burma as it was then named and is still sometimes called in defiance — soon fell into a long military dictatorship. Stagnant authoritarianism imposed and reimposed itself repeatedly throughout the 20th century to such an extent that the Burmese developed a dark running joke. Orwell had written three novels about their homeland: “Burmese Days,” “Animal Farm” and “1984.”

Led by the thuggish General Min Aung Hlaing, the military junta’s recent arrogation of power from Aung San Suu Kyi’s National League for Democracy (NLD) is another sad iteration of the country’s struggle for post-colonial stability and identity.

Suu Kyi, the de facto civilian leader whose party secured over 80% of the vote in November’s groundlessly disputed election, cut her teeth in this fight. She won the Nobel Peace Prize in 1991 for her pro-democracy activities, and by 2011 had helped to inaugurate the democratic wave which now appears tenuous. Presently, she and several other party members are reportedly held in either military detention or house arrest under fatuous pretenses.

With civilian deaths nearing 550, including children and funeral attendees, things have rapidly degenerated into an astonishing quagmire. Those prepared to overlook the situation on account of Burma’s supposed insignificance, however, must reckon not just with the localized atrocities, but with their pressingly global implications.

The recrudescence of dictatorship and the impending civil war signify not only the stubborn sputterings of democracy for a nation so long denied it. These events also raise some of the moral complexities and institutional infirmities which often underlie such struggles.

One must not forget that the Burmese military is guilty of brutally perpetrating a gruesome genocide against the Rohingya Muslim minority over the past several years, a damning mark on Suu Kyi’s formerly sparkling record and a reminder that her government must also atone for its own crimes.

Moreover, advancements of the myriad of denouncements and sanctions imposed by western powers have been stymied at the UN Security Council by China and Russia. Both claim to disapprove of civilian killings. Even so, each has made the necessary propitiations to its new ally, from refusing the label “coup” to providing tanks to the junta to decrying sanctions as unwarranted interventions into Myanmar’s internal affairs.

Despite the rapport between President Xi and Suu Kyi, China’s treatment of the junta aligns with its long support for Myanmar’s military dictatorships. Both it and Russia favor certainty above all else in their sphere of influence and each apparently views the new leadership as a promising, if not a malleable partner. These states thus represent the most formidable obstacle to meaningful United Nations action on this matter and many others.

As in Syria, protracted sanctions often immiserate already destitute populations. Still, if not for Chinese and Russian vetoes, the UN could cease funding to cripple the regime into capitulation. Sanctions may not be a panacea, but with desperate mass uprisings led by people unafraid of standing up to fascism, it seems the perfect moment for a short burst of intense and targeted international pressure to prevent the generals from consolidating their power.

Myanmar still bears its old imperial deformities and is a locus of familiar geopolitical tensions. It had barely shaken these chains for democracy, albeit an imperfect one, when its people were forced into the streets yet again to fight for what many enjoy as a birthright. Myanmarese have lived the nightmare of electoral manipulation felt violently but ephemerally in the United States on January 6, and they hope that democracy may once again suspire.

In the interest of demonstrating some basic solidarity, I would like to plan a modest vigil for those killed in Myanmar. If anyone is interested in participating, please contact me by email or in the comments below. Perhaps we may offer some small amount of support in this way.

Eddie is a sophomore in LAS.