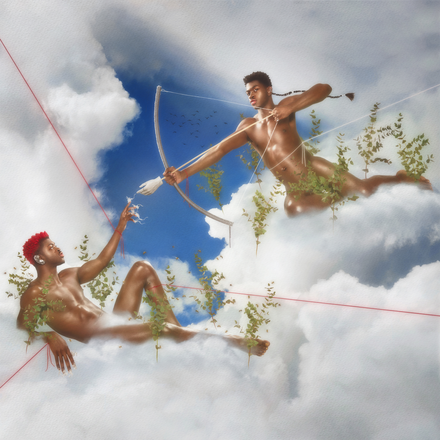 Lil Nas X’s cover art for his new song “MONTERO (Call Me By Your Name)” is shown above. Columnist Micky Horstman argues that the songs music video highlights Christian intolerance toward homosexuality.

Lil Nas X redefined gay culture within the music industry with his release of “MONTERO (Call Me by Your Name).” The song debuted on the Billboard Top 100 and Rolling Stone Top 100, with 46.9 million streams during its first week.

The music video, sitting at well over one hundred million views on Youtube, has been the topic of heated debate by shining a light on the historic and current religious persecution members of the LGBTQ+ community endure.

The artist rose to fame after his country rap song “Old Town Road” spent nineteen weeks atop the Billboard Top 100, becoming the longest-running number-one song since the chart debuted in 1958. While topping the charts, Lil Nas X came out as a bottom — per his 2020 single “Holiday” —  during Pride Month 2019, becoming the only artist to do so while having a number one.

The music video for “MONTERO (Call Me by Your Name)” is flooded with historical and religious references. Set in three locations, each with its own significance, Lil Nas X tells a story that highlights Christian ideology and questions its modern treatment of homosexuality.

The song’s critics have expressed concerns that the music video glorifies Satan. In actuality, the video challenges the Christian norm that associates sexual freedoms with eternal suffering.

The first act, set in the Garden of Eden, depicts both the story of original sin as well as symbolizes Lil Nas X’s struggle with accepting his sexuality. Lil Nas X fights his sexual desires, which have manifested themselves as the snake, only to succumb to his urges and embrace his identity.

During the Garden of Eden scene, a quote in Greek from Plato’s “Symposium” is inscribed on the Tree of Knowledge. The quote reads, “After the division of the two parts of man, each desired his other half.”

“Symposium” tells an origin story of ancient Greece where bodies, some men-men, some women-women and others men-women were separated. The story serves as a classic representation of multiple sexualities being mainstreamed.

The second act portrays Lil Nas X as a Christian martyr stoned to death for his sexuality. As he ascends to “Heaven,” he is greeted by a winged figure representing the Greek figure Ganymede. In Greek lore, Ganymede’s beauty was so intense the god Zeus turned him into an eagle and flew him to Olympus to be his cupbearer and lover. The ascension portrayed in the video acts as another affirmation for Lil Nas X’s sexual desire.

The final act is the most controversial. Described by both Lil Nas X and social media as the #PoleDanceToHell, the song concludes with the artist giving Satan a lap dance before killing him. As he approaches the throne of hell, Lil Nas X passes the Latin phrase which translates to “they condemn what they don’t understand.” This phrase bears a striking resemblance to Jesus’s last words before dying on the cross, “Father, forgive them, for they know not what they do.”

Religious scholars have debated the morality of homosexuality for centuries. Regardless of which side of the argument one falls on, there is no denying its prevalence throughout history. Scholars have identified some Christian saints that appear to be homosexuals, as well as historical figures such as Leonardo Di Vinci, Otto III and even Alexander the Great.

Even Pope Francis made remarks that offered support for same-sex marriage in October 2020 before walking the comments back in March 2021.

Lil Nas X’s release of the song during Christian Holy Week intentionally sparked a heated dialogue that addresses the shifting environments. Christianity has always used fear-based tactics in discussing sexuality and desires — this video offers a satirical analysis of that phenomenon.

The strategy of backlash and disapproval enacted by individuals opposed to the video has been ironically counterproductive. By drawing more attention to the video, these people promoted the song and propelled its chart rise.

They also assume that Lil Nas X’s target group is young children, and while the artist hopes to set an example for LGBTQ+ youth, he has never catered his career as an explicit rap artist toward children.

Additionally, there is controversy regarding the song’s international streaming. Many fans, the artist himself and his record company have reported that some countries have blocked access to the song on music applications. Billboard has denied these claims.

Amidst the confusion, many are left wondering if the alleged suppression of the artist’s material is a result of his homosexually-charged content. Such an impediment of personal liberty should have the pro-free speech right up in arms — but instead, their hypocrisy is showing.

Exposure to gay culture doesn’t equate to creating homosexuality — it only allows for individuals within that community to come closer to acceptance. Similarly, exposure to Katy Perry’s overtly heterosexual “California Girl” music video didn’t erase homosexual feelings for any gay viewers but rather amplified them.

Christian parents and leaders need to have an open and supportive dialogue with their kids regarding sexuality. As a viewer, if one walks away from the video thinking, “This is a sick promotion of satanism,” and not, “We should stop telling children they are going to end up in a boiling, infernal hellscape because of who they love,” they are a part of the problem.

Until Christianity acknowledges basic human rights, artists like Lil Nas X are going to rightfully and rigorously fight to break down repressive and religious barriers.

Micky is a sophomore in LAS.