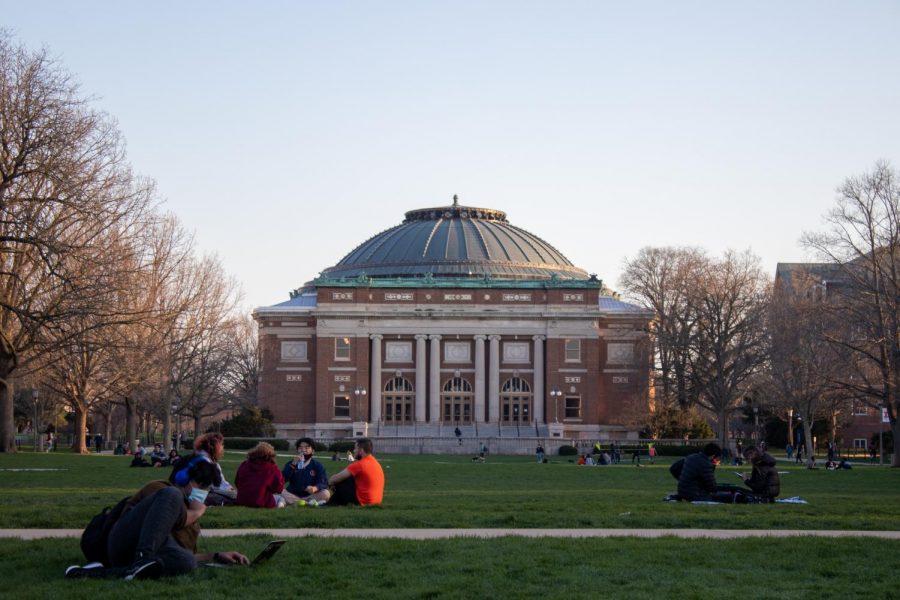 Students sit on the Main Quad April 3. Columnist Andrea Martinez argues that students at the University learn about diversity, but not inclusion — about diverse communities, but not how to interact with them.

The University prides itself not only in its academic achievements but also in its diversity. Over the years, the University has taken deliberate steps to advance underrepresented minorities.

The school boasts a hub of cultural houses, a Veteran’s Center, disability services, diversity staff in each university residence hall and minority programs specific to each college, in addition to the Office of Minority Student Affairs.

The University also has dedicated staff for diversity and inclusion within its administrative departments. The purpose of these employees is to ensure the voices of minority groups are being heard and taken into consideration in administrative decisions.

However, this does not make the University immune to criticism on the subject. Try as they might, the problem does not go away by simply throwing money at the issue.

Too often do people misinterpret the statistical data to mean the job is done; many believe that because the University offers certain types of services or a specific amount of resources for minority students that the issue has been solved.

That presumption is far from true. It remains that the “Inclusion” in “Diversity & Inclusion” has been left out of the solution. Admittedly, this issue has more so to do with the student body, rather than the administration itself.

Perhaps you found yourself in a classroom, wanting to befriend a nearby international student but are unable to approach them for fear of making them uncomfortable or simply because you might have nothing in common with them.

Maybe you considered visiting a cultural house or event to learn more about other cultures, but the thought of being the odd one out invokes a sense of worry for fear of being judged and mislabeled, so you would rather not go at all.

That is what being a minority at the University of Illinois — still a predominantly white institution — is like. It is the feeling of being afraid to communicate with people of other groups you do not feel included in and sometimes being the only minority in your classes.

Most importantly, the issue lies in the fact that, despite the diversity in our student body and the plethora of events and services available to all students regardless of minority status, many will not seek out those events, services and relationships if they do not feel included.

On this front, it is the fault of the University for not facilitating large-scale interactive diversity and inclusion workshops for its students the way they do for responsible drinking. Students at the University learn about diversity, but not inclusion — about diverse communities, but not how to interact with them.

The University talks the talk when touting its achievements in diversity, but it now must walk the walk by properly focusing enough resources into the department of inclusion.