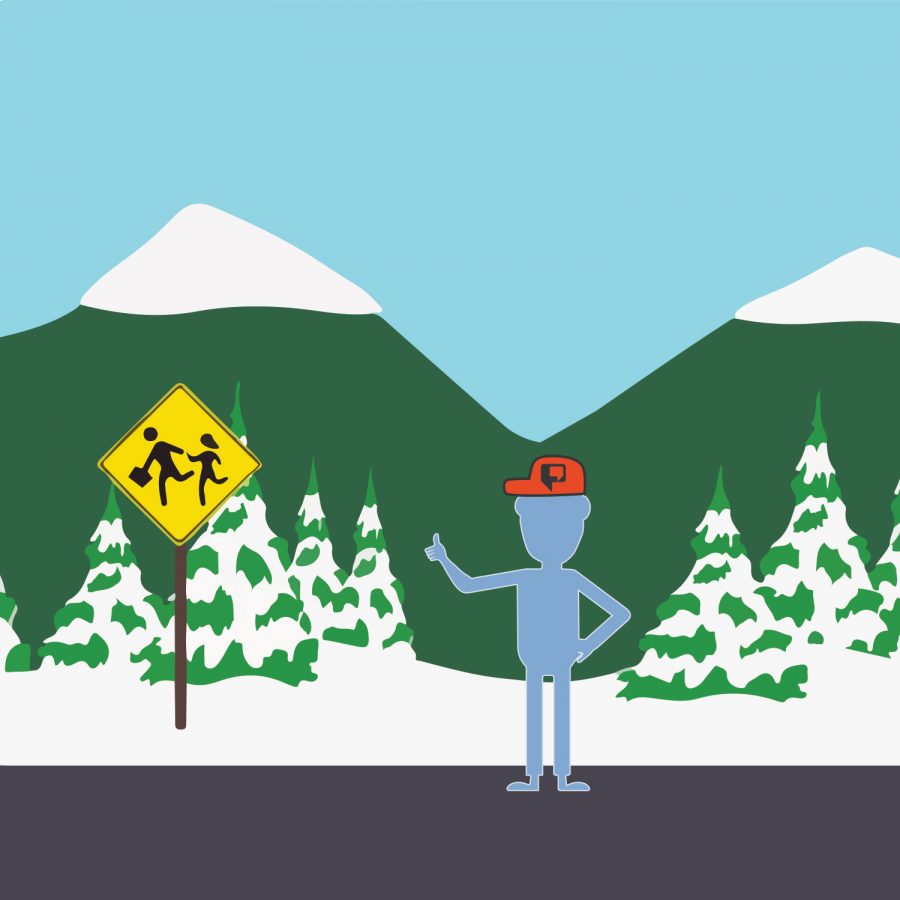 Following his Iowa City escapade, Scout’s 2004 Subaru Outback suddenly spins off the side of I-80 apparently due to “unchecked” tires — Scout routinely glances at his tires, mind you. Additionally, Scout’s belongings are destroyed in a catastrophic explosion from the crash. Scout now packs what’s left of his essential supplies: five pounds of Fruit Gushers, a Daily Illini ballcap and takeout from the Ikenberry Dining Hall.

Scout treks forward as the lonely day transitions to a storm-drenched night ripe with thunder.

Spotting a poorly-lit gas station across from an abandoned police car excites Scout to the promise of stale Pop-Tarts and cheap lottery tickets, a necessary gamble given his tremendous loss betting an undivided dollar on Dogecoin.

With the store channeling a John Carpenter, B-movie horror flick Scout’s dad pirated from cable back in the ’80s before his arrest in 1994, Scout walks in to find the scene of a grisly murder. His natural-born, American citizen instinct to ask for the manager leads him to find the store’s inhabitants to be more zombie than usual.

Curiously, it turns out, the patrons had become genuine, gruesome zombies — not the typical pot enthusiast lurking for Twinkies. A fierce confrontation arose, yet through sheer journalistic integrity, Scout narrowly escaped through a collapsed wall.

Fortunately, Scout scored a 34 on the FitnessGram PACER test back in eighth grade in a failed attempt to impress his classmates, so his cardio skills are not to be underestimated.

After hightailing northwest for around five hours, Scout takes a break to browse a different zombie apocalypse, Reddit. Scrolling through the latest garbage fires erupting on r/wallstreetbets, he learns that Willamette, Colorado, a town about three or so miles from the gas station he escaped from the night prior, had been quarantined due to a violent zombie outbreak. Apparently, a refurbished crypto-mining facility leaked detrimental fumes to Willamette, yet it was too late.

Scout grew upset as he planned to go to enjoy the aforementioned stale Pop-Tarts, but his aspiration was cut short as his voyage became more and more… colorful?

Scout continually progressed toward the upper basin, promptly to find the surrounding foliage more paper in texture and stark in color.

After failing to catch a bus at the nearby station, he proceeded into the local town, finding the disturbing inhabitants sporting frighteningly similar faces and freakishly large eyes. Scout was increasingly terrified when confronted by a group of bizarre school children hurling TV-MA curse words at him.

Emotionally drained, and on the verge of a panic attack, Scout once again hightailed it west.

Lacking Fruit Gushers at his disposal, he inscribed his legal will to donate his future wealth to generations of Illini after his death: a $15 donation to the Krannert Art Museum and $6.27 to rebuild a new Pennsylvania Avenue Residence Hall.

Before Scout could reach his lawyer, however, he began to hear gunfire and explosions erupting from the nearby Rocky Mountains. Scout soon discovered an encampment of national guard troops and hurried to ask for assistance.

Scout’s initial requests for food and water were met with a mix of Spanish and Russian, which only continued to fuel Scout’s undying regret for not taking a fourth year of Spanish in high school.

Scout’s conversation was soon interrupted by sporadic gunfire and tear gas. Scout hastily made an attempt to flee but was quickly bagged and thrown in the back of a pickup truck. Scout’s continued panic subsided when he was later released to notice Charlie Sheen.

Before Scout could elaborate his adoration for Mr. Sheen in “Wall Street,” Scout was handed an AK47u and told that a platoon of Soviet and Cuban infantry was heading up the mountain. Scout was also ordered to defend the so-called “Wolverine” outpost to his dying breath.

Scout subsequently reflected on his removal from the Junior Reserve Officers’ Training Corps for “inadequate thumbs” petrified him as the battle raged across the mountainside. He determined that Colorado’s cannabis culture had truly gone out of control, and while Mr. Sheen’s offer for battle was enticing, his Denver Holiday Inn cancellation fee was too great a casualty to tolerate.

Amidst the chaotic battle, Scout acquired a Soviet motorcycle and began to speed down the mountainside, arriving shortly at the Utah border. Heading for safety in the State of Deseret, Scout pondered whether there is any “real” America to be found in a war-torn state like Colorado?

Scout lovingly recommends Colorado to those with a death wish. Nonetheless, Scout’s hunt for the real America endures; the search continues.