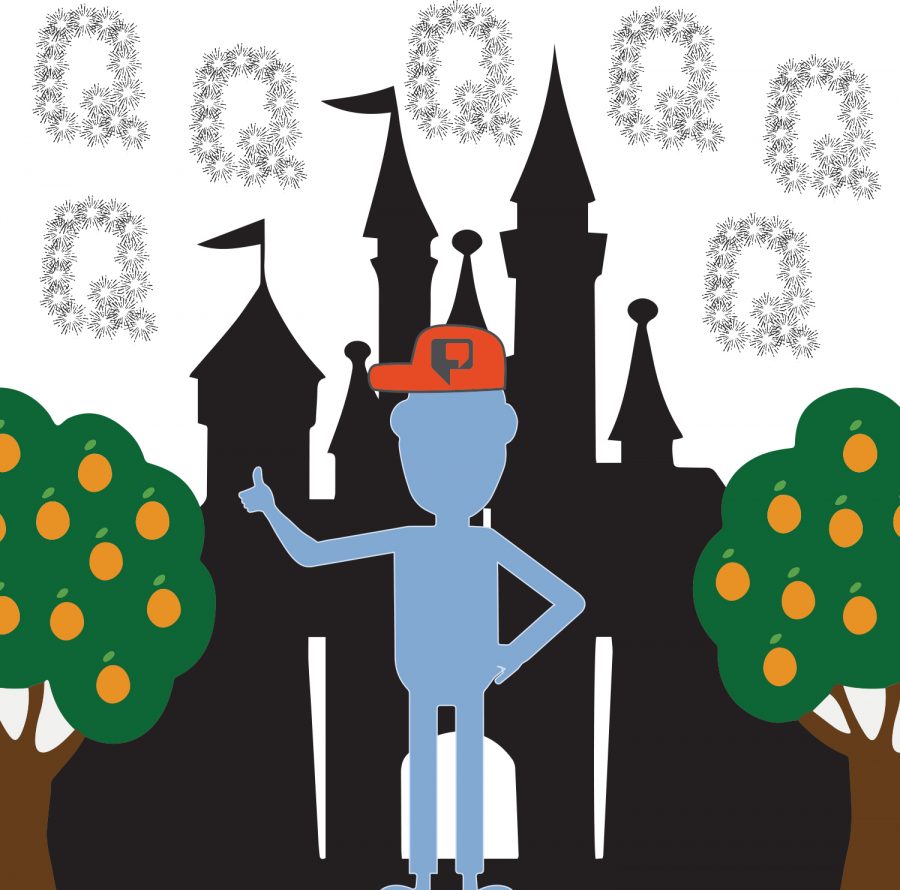 With the Los Angeles goal receding, Scout hopes to continually uncover the American West before further departing east, ending his journey in either the Big Apple or — if the New England gatekeepers permit — Ben Affleck’s hometown. Nevertheless, Scout marches forward.

Escaping the monstrosity that is Hollywood Boulevard, Scout dashes south to seek refuge in the sun-kissed region known as Orange County. Bolting in his worn Subaru, Scout subsequently takes “The 5” south with the destination of Disneyland in mind.

Arriving in Anaheim, Scout is immediately taken aback by the sheer transformation in the atmosphere. Once exiting L.A. County, Scout is greeted by remarkably virtuous air unoccupied by the typical smog populating L.A. Additionally, for the first time in weeks, Scout is no longer distressed over the fear of a wild Jimmy Kimmel or Ellen DeGeneres sighting.

Still, Scout remains vigilant over the threat these cheugy comedians present to his search for the American spirit.

With his duct tape-clad Subaru stalling about five miles north of Disneyland, Scout accordingly is presented with a puzzling predicament: Continue his retreat from L.A. by foot until sundown, or await an autonomous vehicle to brazenly hop aboard.

The answer is clear: Scout must freighthop into a self-driving car. In addition, Scout is timid of the night in Orange County — despite its secure, daytime allure, Orange County is described to Scout consistently as offbeat with the moon’s nightly rise.

Anticipating a neglectful autonomous vehicle to arrive at any moment, Scout arrives at a sober realization. Although his “self-driving hop” will vastly assist his speed, Scout accordingly comprehends that no matter his vehicle — foot or automated Fiat — night will dawn on Scout.

After an unsteady leap onto an automated Fiat, Scout is once again on the march towards Disneyland; Sleeping Beauty’s castle accosts the horizon.

Upon entry into the Magic Kingdom, Scout swiftly registers that he is not alone in his midnight excursion. Alongside hundreds of fatigued families, Scout stands beneath Sleeping Beauty’s castle and suddenly senses a mutating mood affecting the crowd.

Nevertheless, with the launch of a single red firework, the crowd instantly alters its posture.

Preceding the imperative firework, however, Scout — with impeccable journalistic prowess — noticed this crowd appearing antagonistic to an outsider like Scout. Furthermore, it was not until the red firework tumbled down the sky that Scout recognized this firework to resemble the letter “Q” — a blatant homage to the conspiracy believing Hollywood devours babies, QAnon.

Moreover, as the next fireworks sprung with succeeding “Qs” and a phrase like “WWG1WGA” — “Where we go one, we go all,” QAnon’s rally call — Scout soon witnessed the crowd morph into a maddening protest. Signs decorated with “Down with the Mouse House” and “Mickey is the Kabal” littered Main Street U.S.A.

“What we want is for this Kabal to end, here and now,” claimed the man clad in what mirrored a dated navy uniform.

“For too long has the mouse terrorized our kingdom. Today, we wake up the masses.” Following this interview, Donald Schmuck donned a MAGA hat refitted with a duck’s bill at its edge.

From what Scout can understand from this sporadic, QAnon, Disney bejeweled rally, Orange County is the sole location where the Deep State — led by a particular “Mickey Mouse” — can be conquered.

After several Q-themed firework displays and other speakers including Daisy Schmuck, Jiminy Cricket and Goofy, the rally concluded with a call for Orange County to secede from the union. Met with thunderous applause, Scout observed that Donald Schmuck will be central in California’s impending gubernatorial recall election.

Continually on the search for the American spirit, Scout consequently pondered that this sought spirit may indeed be untethered within Orange County. Although the inhabitants of Disneyland were admirable in their unbridled courage against the purported Deep State, their efforts — however noble — are futile.

It is in Scout’s humble opinion that the Disneyland Deep State, conducted by Mickey Mouse, is too big to fail. Similarly, Scout cannot help but consider cheugy royalty — “comedians” Jimmy Kimmel and Ellen DeGeneres — exist behind Micky’s Deep State curtains…

Scout candidly recommends Orange County and Disneyland for patriots. Unrelated to the liberal demagoguery in neighboring L.A., Orange County is for the freedom fighter — no matter how fruitless their fight.