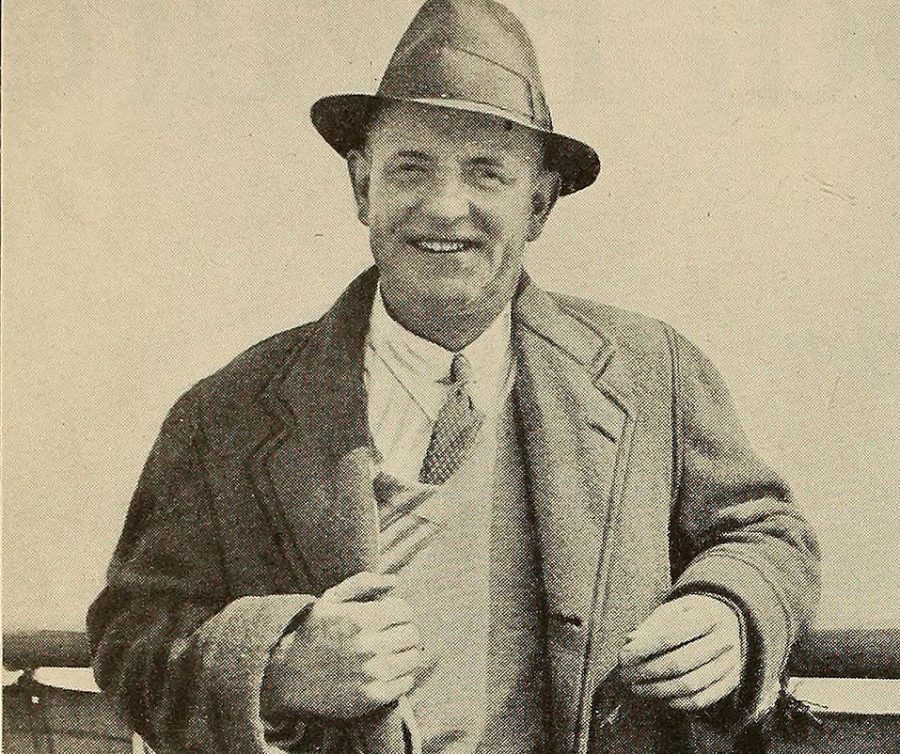 Author P.G. Wodehouse poses for a photo in the 1930’s. Columnist Eddie Ryan claims that Wodehouse’s novel “The Code of the Woosters” perfectly encapsulates British social conventions through his use of comedic remarks.

P.G. Wodehouse’s novel “The Code of the Woosters” offers a delightful reprieve to readers weary of everyday stress and boredom. Whatever the unwholesome mixture of these elements one flees, Wodehouse provides the antidote to societal tedium and political severity: intelligent and ironic comedy.

Despite that which its familiar setting in the English countryside fails to provide, the Wooster world’s amenities more than compensate. The eloquent but rather idle Englishman, Bertie Wooster, swimming in currency; the reserved and immaculate manservant Jeeves at the ready.

Set adrift in a sea of petty quarrels among rich clans, brushes with the law and a series of nearly botched betrothals — over an undercurrent of rampant blackmail — these men barely avoid a “durance vile” for Bertie. The novel’s protagonist, Bertie Wooster, is a wealthy bachelor who lives with Jeeves at his home in London’s Berkeley Mansions and finds his way into all sorts of improbable entanglements.

Bertie Wooster is Wodehouse’s main vehicle of wit and dramatic irony, while Jeeves supplies the wisdom. The plot centers around a cow creamer, a collector’s item that Bertie’s Aunt Dahlia orders him to steal from Sir Watkyn Bassett, rival collector and town magistrate. Bertie is also tasked with saving “sensitive plant” Gussie Fink Nottle’s engagement to Madeline Bassett, Sir Watkyn’s niece, which draws him to the Bassett country house.

Hijinks ensue as Bertie endeavors to nab the silver cow and reunite one and then another pair of lovers — Stephanie “Stiffy” Bing and curate Harold “Stinker” Pinker — all while evading “the clutches of the law” with which he was previously acquainted.

Additional duties include recovering a lost notebook of insults penned by Gussie about Sir Watkyn and fascist “Black Shorts” frontman Roderick Spode, the latter proving a menace and a nuisance until the revelation of his secret passion for designing women’s undergarments reduces him to “on-a-leash” subservience.

“The Code of the Woosters” displays Wodehouse’s mastery of the comic genre and his care for language. Perhaps a short review of the various lists one is impelled to compile in its margins will provide a sufficiently seductive taste of these talents.

For going and coming, one finds chaps and ladies having “biffed off,” “shimmered in” or “trickled out,” provided they haven’t already “beetled off” or “nipped to the door.” A slew of gallant terms of endearment flow as well from Bertie to his Aunt Dahlia. The loving but coercive matron often “totters in” to a greeting of “old ancestor” or “aged relative.” Reserved for Pop Bassett is the mordant “old disease,” or “old poison germ.”

Wodehouse deftly establishes rhythm in his prose with these quips, and he sustains it by bending language to his whim. This is humorously accomplished through the shortening of words — “pash” for passion, “the situash” for situation — and of names or objects to their first letter.

These techniques are often constituents to Wodehouse’s many memorable one-liners which, along with the plot, are about the finest testament to his craft as can be offered in short space. One finds, for example, that while “not actually disgruntled,” Jeeves “was far from being gruntled” in the opening pages of the novel.

What’s more, contained in Gussie’s journal of invectives, is a note that watching Spode eat asparagus “alters one’s whole conception of man as Nature’s last word.” And, while certainly stirring, the newt custom of waggling tails at one another during mating season is, to Bertie, “not my idea of molten passion.”

Those enticed by the above should experience for themselves Bertie’s discovery of Roderick Spode’s dictatorial aspirations and his subsequent confrontation with the maniac. These scenes show Wodehouse weaving political subtext in with humor — note that the “Black Shorts” derive from the fascist Italian “Black Shirts” militia — while displaying Bertie at his most dignified and oblivious.

Scarcely political and light even on true social commentary, “The Code of the Woosters” is a farcical representation of respectable Britain’s social convention and melodrama.

If done through an unserious lens, it still captures serious vistas of honor and character — both embodied by the creed for which the book is named. Bertie’s parodistic dedication to the code sustains the plot and might suggest a more sober takeaway. Yet, of course, it is also central to the farce; it highlights the incongruity of a man so frequently entangled in silly and juvenile debacles yet so bent on honor and dignity.