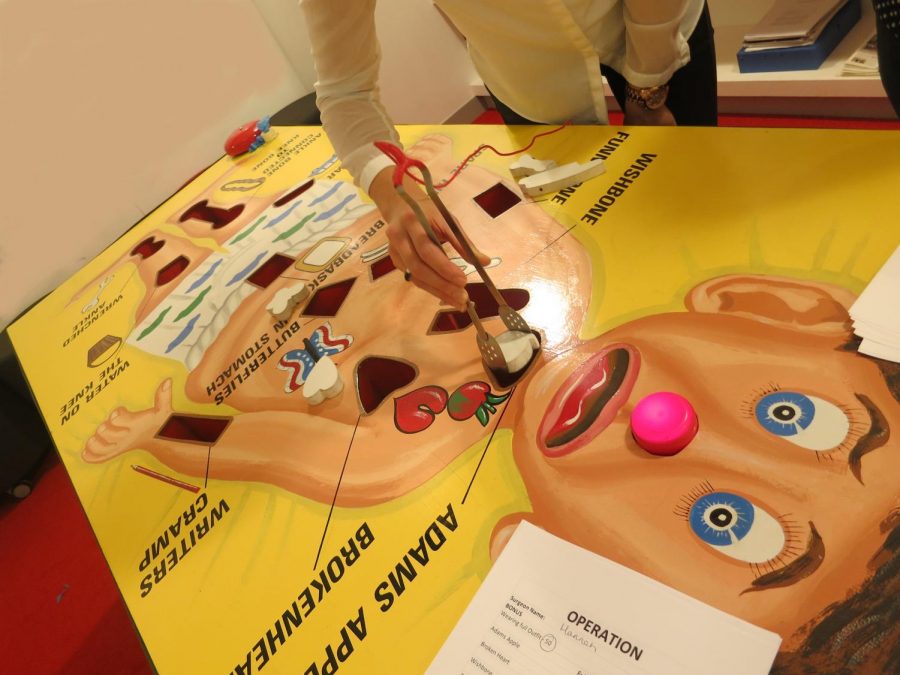 A giant version of the game “Operation” is played in an office. Columnist Noah Nelson believes University alum deserve recognition for their creations such as John Spinello who was the original founder of “Operation”.

Since its inception in 1867, the University has become one of the best institutions in the country. Likewise, if anyone doubts the University’s success, look no further than its historic Illini alumni.

Over the years, University alumni have founded countless companies such as YouTube, Yelp!, PayPal, The Weather Channel, Tesla, Disney Channel and the National Football League — just to name a few. Alumni also have worked in the White House and Congress, visited outer space, won Pulitzer Prizes, starred in movies and so much more.

While these accolades are no doubt impressive, not many in the University community know about the following inventions created by University alumni. They’re everyday items we take for granted, and everyone should recognize the alumni behind them.

In the 18th century, a Swiss mathematician created a game called “Latin Squares” in which players must write multiple letters and numbers in a single box, but must not repeat in any row, column or box.

Flash forward to 1979 when University alumni Howard Garns, who graduated in 1926 in architectural engineering, created the modern game of Sudoku everyone knows today, in which players must fill in numbers one through nine in nine large boxes where no number can repeat in a row, column or box.

When first published in “Dell Pencil Puzzles and Word Games” magazine, the puzzle was called “Number Place,” but in 1984, Japan popularized it with the name “Sudoku.”

Now, the game is one of the most played in newspapers worldwide, and Garnes is credited for much of its founding.

But it wasn’t the only popular game today from the mind of an alum. In 1962, while studying industrial design at the University, John Spinello designed a toy for a class project. This led him to create the original version of the “Operation” board game in which he sold the rights to Marvin Glass — the founder of Mouse Trap and Lite Brite — for $500.

Nowadays, the “Operation” franchise is worth over $40 million, and Spinello doesn’t receive a penny.

In 1971, Xerox Sigma V mainframe operators at the University gave Human-Machine Interfaces student Michael S. Hart extensive computer time — so much so he created the first electronic document by typing the Declaration of Independence into a computer. This soon led to the creation of the modern-day ebook, and many historians consider Hart its originator.

The next time you use these modern-day items, appreciate the University alumni behind them.

These profound innovators’ work should inspire you and your time at the University and be proof that anything in this world is possible. As the old saying goes: “Don’t be proud of your college. Make your college proud of you.”

Fellow Illini, let’s follow in their footsteps and take on the world together. Onward.