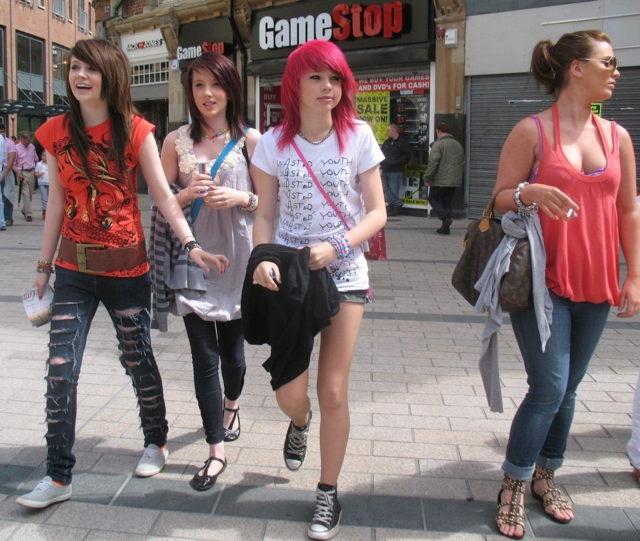 A group of teens walk outside of a GameStop in the early 2000s. Columnist Jane Knight proposes to bring cringe back to combat unrealistic beauty standards.

Whip out the One Direction CD and hop in my mom’s car losers, we’re going to Hot Topic.

Everyone had a different style of being cringe in their tween-to-teenage years. Whether it be wearing tattoo chokers, Cookie Monster hats or exclusively rocking Victoria’s Secret Pink yoga pants and perfume, the point is simple: We all had a phase.

However, there exists a daunting difference between the Gen Zers and the post-2000’s babies that we only know as the TikTok generation. It seems that the ever-so-important, humbling and crucial learning stage of being cringe no longer exists. Most noticeably, this behavior subsists in young girls. Teenage girls are putting down the phone case lip gloss in exchange for Dior.

Societal pressures have consistently been forcing women to mature at a young age. It doesn’t take a rocket scientist to notice the images of women that have been pushed out as the ideal in all forms of media.

However, while our generation has also been well immersed in the hypersexualization of women, we at least have a nonsense radar. We observed the Kardashian’s age and learned growing bigger lips wasn’t part of puberty.

It appears that this scrutiny isn’t as strict anymore. In an interview from last month, the Kardashians confidently denied they promote an unrealistic and unattainable image. Rather, they claimed their stone-chiseled bodies were exclusively from living a “healthy lifestyle.” I was desperately hoping Dr. Miami was behind the stage with Ashton Kutcher waiting for this moment, like an episode of Punk’d.

This isn’t to say getting work done should be discouraged. It just requires transparency.

With technology advances and constant media access, girls are engrossed in these unrealistic images and can rarely see that it’s normal to be and look like a kid. Especially now, when they give you an iPad before your umbilical cord is cut. When the pressure to look a certain way inevitably bleeds down to younger generations, it chips away at self-worth — an experience I can affirm.

We can see this effect in full swing from looking at consumer habits. Stores with tween audiences are rapidly filing for bankruptcy because that audience is vanishing.

Additionally, suicide rates among girls aged 10-14 have nearly tripled from 2007-2017, making it the second leading cause of death in females aged 10-19.

While there aren’t many answers as to why this has increased so significantly, social media undoubtedly plays a role here. Most girls can’t live up to societal pressures, and their lives are cut short before realizing this pressure is forged.

Refuse to blindly follow toxic celebrities. You may think it’s obvious, but tell your little sister these idealistic images aren’t real and that they don’t matter. Let the tweens around you wear something they’ll laugh at in a few years.

Heck, maybe even go get a pair of matching hamburger earrings from Claire’s.

Jane is a senior in LAS.