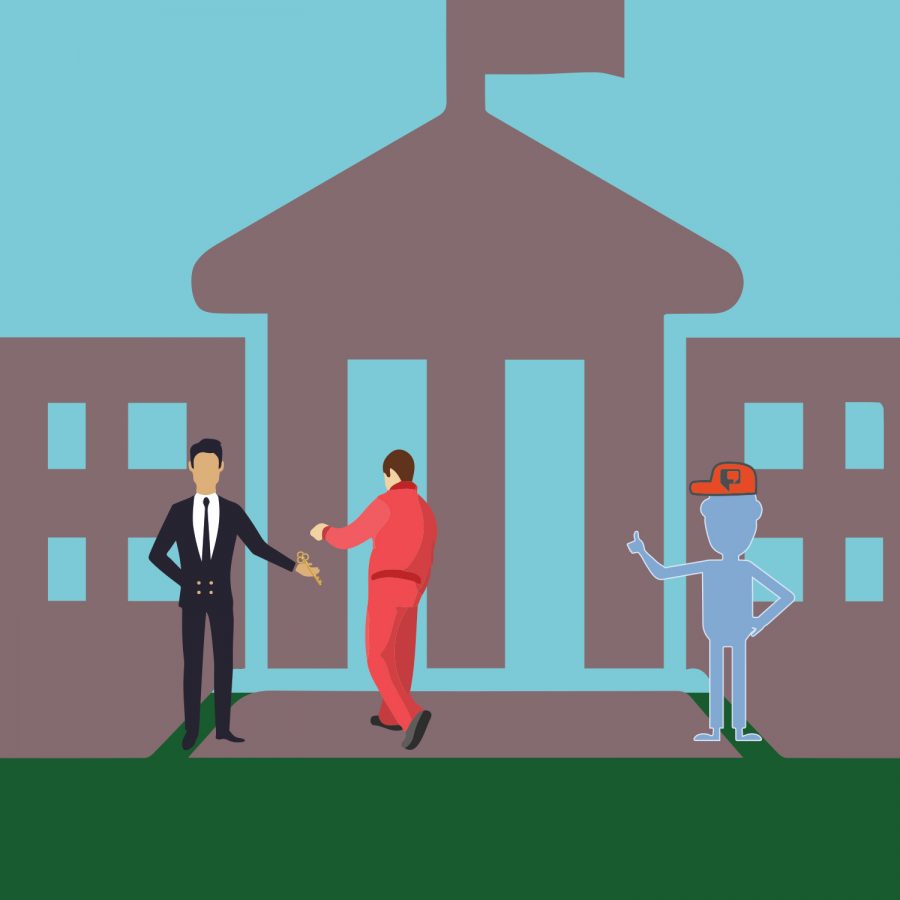 Green Street stood solemn this Tuesday night. As students softly slept following another breathtaking and exhaustive day in C-U; all was quiet on Campustown’s main street. The street lights and their sharp yellow-whites laid bare a city asleep.

The scene was more peaceful than the typical discussion post consisting of “I completely agree” and “Yes, and to take that further … ”  Similarly, for the rare individual still perusing the desolate streets, a smile would greet one as these scarce students sought swift sobriety at their homes.

Unbeknownst to these innocent souls, a horrid whistle previously unheard in Champaign would soon greet Green Street and its sluggish occupants.

Scout, as any tremendous reporter, was already on the scene promptly at 3:05 a.m. when the faint echo of an abysmal instrument began to ring throughout the Green Street corridor. Correspondingly, the earth began to shake when, minutes later, the clamor of what appeared to be some sort of rocket throttled through Campustown.

As the earth vibrated and apartment lights steadily woke up, bewildering headlights formed into one immense ray resembling sunshine prematurely arriving. Although Scout promises to endure stoically and thoroughly report, Scout will concede he perceived the sun to be crashing down on Champaign with the belligerent sound and fury.

Before Scout could further comprehend how the sun could crash into Green Street, reality subsequently returned with the observation of a red, 2009 Honda Civic featuring a flagrant spoiler revving for some self-conceited glory.

The engine revver, once past Burrito King, abruptly broke the sound barrier which agitated and shattered several windows. Dejectedly, the driver of this Honda Civic, with its sound barrier speed, narrowly escaped the wrath of Scout’s journalistic fury. Therefore, the driver remained at large that elusive night.

It was not until the succeeding morning, with ejected glass shimmering on sidewalks, could Scout update this story.

“URGENT,” read an email to Scout, “Mayor Deborah Frank Feinen of Champaign calls for an emergency news conference in wake of the shattered sound barrier due to a Honda Civic. The event is open to the public and will take place outside the now hollow ground that is Burrito King. Press arrive free, others will be charged a $10 cover — welcome to Champaign.”

Correspondingly, Scout rushed to Burrito King for this critical conference. Punctually at 11 a.m., Mayor Feinen took to an impromptu stage.

“Good morning Champaigners. I know last night for some was vile, and I pity those who were awakened to the rare sound of an engine revver.

However, today I am pleasantly surprised and humbly grateful to bestow honor to a singular individual. You know, it takes courage to rev your engine — particularly when no one else will in the early morning hours. Likewise, I owe a sincere debt of gratitude to the silent majority that is the revving community for their continued support in my endeavors.”

In the front row, a group sporting backward caps and KAM’s jerseys began to cheer and rev their bellows.

“Therefore, on this sanctified day, I proudly present keys to the city to Rory Duke, the man who revs his engine when no one else will. We thank you, Rory. And we commend Rory and his revving for their scientific pursuits.”

At this moment, Rory rose from the crowd in his “Space Jam: A New Legacy” jersey and, in one movement, scooped the keys and raised a fist in the air — seemingly defiant to a nonexistent force wishing to stop his engine revving.

“Revvers, this one’s for you!” Rory cried out to a crowd consisting of lost freshmen, perplexed pedestrians and the suddenly public revving community.

Following this call for celebration, Rory argued it was time to exert masculine ascendancy the premier way he and his crew knew: “Rev it up, boys.” Scout, despite juddered earth and splintered sound barriers, was not too impressed.