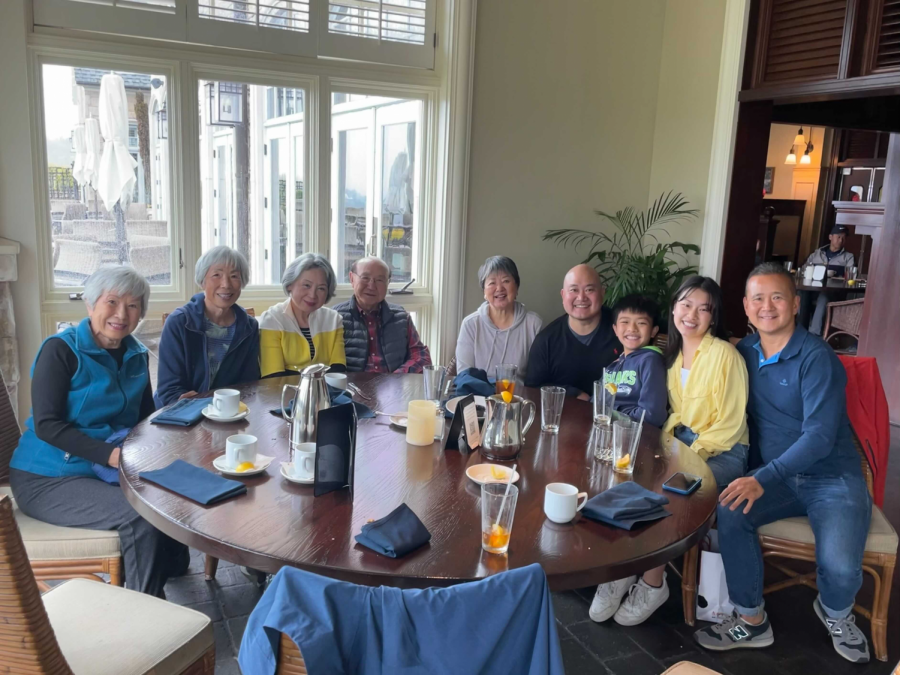 Columnist Rayna Wuh poses for a photo with her family over the summer. Through connecting with her older family members, Rayna observed that love can last across great distances and time.

This past summer, I spent a month with my grandmother under the picturesque backdrop of towering evergreens, mountains and sunny skies. Devoid of the regular gray and rain present during other seasons, the Seattle suburbs were a perfect place for me to recuperate after a challenging semester.

I am often called a grandma by friends and family because of my affinity for crafts like embroidery and crochet, baking and early bedtimes. Living with my grandmother or nai nai (paternal grandmother in Chinese) allowed me to test that hypothesis and bring in a welcomed change of pace from my regular lifestyle.

In addition to including me in regular aspects of her routine, she also let me tag along to group gatherings she had with her friends. Everyone else in the room was several decades older than me and they spoke to each other exclusively in Mandarin.

I have not formally learned any Mandarin since my junior year of high school, and I seldom speak or hear it at home. However, despite these language barriers, I felt immediately welcomed by her circle of friends.

When I had trouble understanding what they were saying or responded entirely in English, they reassured me that it helped them practice their English, something they hardly used during the pandemic.

My grandmother lived in Shanghai during the time of the cultural revolution so her family moved to Taiwan before all of mainland China became occupied by communists. She moved to the Seattle area in the 1970s and she has been there ever since. Over the years, some of my grandmother’s friends from both China and Taiwan also moved to the states. My nai nai explained that even though some of them had not seen each other for long stretches of time or were not particularly close in the past, they began to gather after ending up in the same area.

I found it fascinating that in an age prior to social media, this whole group managed to converge. My grandmother only stayed in touch with a couple of people after moving, but they stayed in contact with several more people and so on until, eventually, they all found each other through mutual friends.

A lot of our connections now seem to hinge on the presence of social media and networking applications. It was comforting to see how long-lasting friendships can form and reform without the need for constant contact over decades.

The conversations among my grandmother’s friends were always loud and lively. I felt at home as they readily included me in their gossip and laughter. The way they converse now is probably no different from the way they did when they were teenagers.

Although there were many nonfamilial aunties and uncles whose names I had previously heard in stories or met in passing, this was my first time truly getting to interact with them. I loved getting to know their specific idiosyncrasies and hearing stories directly from their sources.

Grandma Anna loved retelling a story from when I went to a buffet with her several years ago and insisted we ate “up to the value.” Grandma Cindy immediately wanted details into my love life and Grandma Linda and I bonded over our shared love for books.

In the past, I was unable to spend more than a couple of hours with my nai nai at a time because she lives relatively far away and my whole family’s schedule tends to be hectic. During those times, I rarely got to spend it with her one-on-one. I am so grateful for the extra time I had this summer to regularly chat with her and get to know her better as the lively, social butterfly she is.

The entire month was a refreshing experience. The pandemic has been a largely isolating experience and it has become so easy to feel out of touch. However, I left Seattle with a renewed sense of faith in lasting human connection and a closer bond with my nai nai and her friends which I will cherish for years to come.

Rayna is a sophomore in LAS.