Opinion | UI has an unofficial mascot 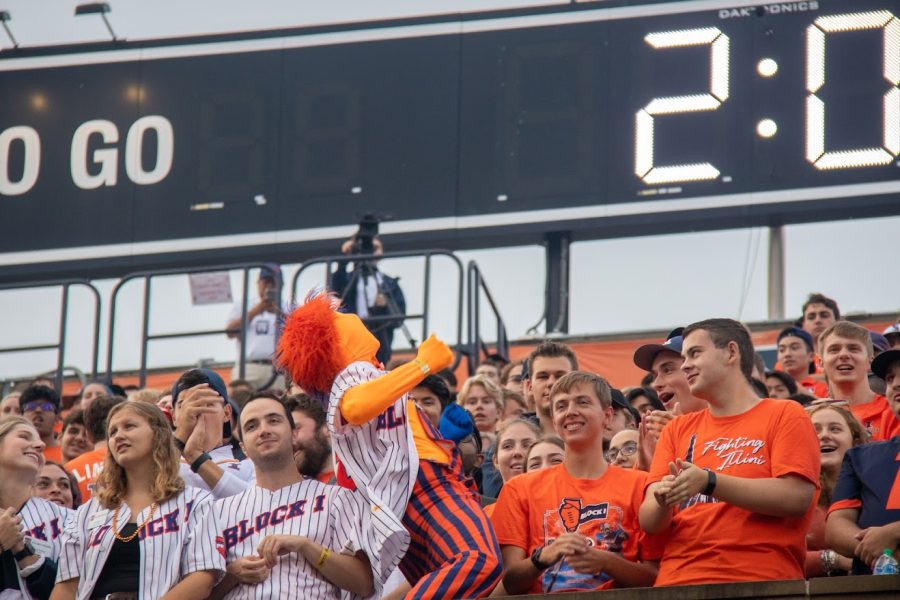 Senior Charlie Foster pounds on his chest during a game against UTSA football on Sept. 04. His iconic look has made him the “unofficial” mascot for UIUC.

Finding your place in the world can sometimes be one of the most difficult tasks anyone can do, especially when you attend a school like the University with over 50,000 students. Many students do find where they fit into the molds of campus life, including athletics, art, academics, fraternities and sororities, church, music and so much more.

One student, in particular, has found his place too. Meet Charlie Foster, a senior in aerospace engineering and a fellow member of Block I, the student section for Illini football. Every day, he’s just a regular student attending classes and spending a great amount of time in Grainger Library. But at every home Illini football game, he’s our biggest cheerleader and the school’s “unofficial” mascot.

If you ask any student who attends Illini games, they probably know who Charlie is too. It’s easy to do when he wears the same outfit at every game similar to that of a cartoon character who dresses the same in every episode. At games, Charlie sports orange and blue bib overalls over a morph suit of similar colors over an Illini Pride shirt. He tops his outfit with an orange and blue wig making him look like Sideshow Bob from “The Simpsons.”

But Charlie isn’t out to murder Bart Simpson. He’s determined to make the most out of every home football game possible. He does so by running around the North Endzone student section high-fiving fellow students, dancing like no one’s watching (even though we all are) and leading everyone in the famous “I-L-L” chant as much as he can.

All of this and so much more has made Charlie a small celebrity at the University — a mascot if you will. Most people know him from his game day antics, and he soaks it all in like a nice hot shower. His game day escapades, in large part, made him who he is; I’m proud to say he’s one of my best friends on campus as well.

In 2007, Chief Illiniwek retired from an 80+ year reign as the University’s mascot. Since then, nothing has replaced him at Illini sporting events. Over the years, there have been several suggestions for a new school mascot like a Galloping Ghost in tribute to Illini legend Red Grange, an orange and blue Kingfisher bird and even Illinois state’s own Abraham Lincoln. Nothing is official yet about any of these options, and who’s to say when or if they will ever be.

In the meantime, Charlie is like the school’s “unofficial” mascot. He dances, chants and hypes the crowd for an Illini victory. Sure, I do the same at games in the student section, but nowhere near the level of Charlie. He’s the Chief without any Native American regalia or disrespect toward tribal communities.

At the end of the day, Charlie will always be who he is, and no one can ever change that. No, he will probably never be an official school mascot but to us students who enjoy Illini football games with a passion, he will always be “our” mascot.

He’s found his place in the world, at least right here at the University. Take Charlie’s story as a dose of inspiration that if you want to find your place too, there’s nothing wrong with wanting to be heard and seen.

Sometimes, it’s the best way to go through life: living it to our fullest and making each day count. He’s changing the world one game at a time and impacting everyone around him, even when he doesn’t know he is.

To Illini fans everywhere, Charlie may not be a part of your history with the University, but he’s a part of ours. For that, we are forever grateful and our time in the North Endzone will always be memorable because of him.