Opinion | LGBTQ+ media for everyone to enjoy | II 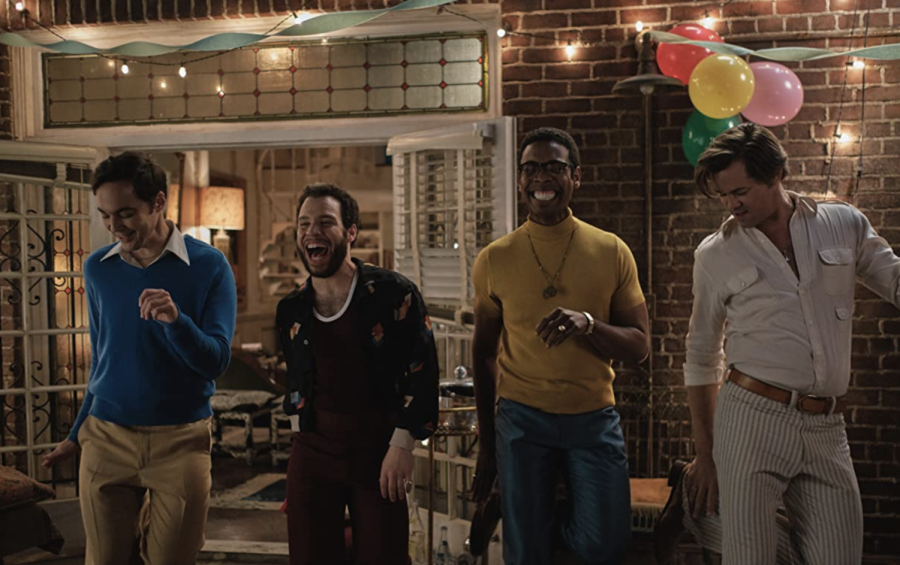 Andrew Rannells, Robin de Jesus, Jim Parsons, and Michael Benjamin Washington star in the film “The Boys in the Band” released on Sept. 30, 2020. Columnist Mickey Horstman reviews LGBTQ+ media that everyone will enjoy.

Continuing my ever-growing collection of gay media, I’ve gathered some of my favorite movies and books. I spent my summer free time consuming as many different stories from as many different authors as I could. In my search, I also stumbled upon a few dishonorable mentions, which consist of popular stories based on outdated or toxic thinking.

Currently Reading: “They Both Die at the End” by Adam Silvera

Up next: “The Extraordinaries” by TJ Klune

“Red, White, & Royal Blue” by Casey McQuiston:  The original take on a gay “fairy” tale, this book is a must-read New York Times Bestseller. I absolutely see myself in Alex Diaz-Claremont: He is smart, sassy and politically savvy. The relationship is genuine, sexy and doesn’t seem rushed or out-of-place. It is high stakes, addictive and full of modern political references, leaving me wanting more. I believe it’s being turned into a movie — if the director ends up reading this piece: Please know I am available for casting.

“The Song of Achilles” by Madeline Miller: A romantic, fantastical and tragic take on the story behind the siege of Troy. Following the life of Patroclus and his relationship with Achilles, this is some of the best romance writing I’ve ever read. The ending, despite being foreshadowed by the fates, is shocking and brilliant.

“A Very, Very Bad Thing” by Jeffery Self: A book near and dear to my heart, Jeffery Self is a gay author who writes gay books. I performed a sampling of this comedic and tragic masterpiece at the Prose State final for Speech & Debate and won 16th place with it at the national competition. The story explores the complexities of religion and teenage sexuality — I highly recommend it.

“Call Me By Your Name” by Andre Aciman: The movie is good, the book is better. Timothée Chalamet’s career was jumpstarted by this role, but I can’t help but think of the potential success a gay actor would have attained for playing his or Armie Hammer’s part. The book, however, explores the relationship in much more detail and isn’t limited by Hollywood “gay for play” standards.

“Playing the Palace” by Paul Rudnick: My most recent read — definitely influenced by “Red, White, and Royal Blue” — is a playful and quickly-paced take on a royal relationship with the main character, Carter, finding himself being swept away by the dashing Prince Edgar. I found Carter to be incredibly relatable, especially in his campy yet self-destructive nature.

“The Boys in the Band” (Netflix): A superstar lineup of gay actors. Set in the late 1960s, this movie navigates the difficulties of coming out in an unaccepting society. This film is the only Ryan Murphy production that will make this list… I am not usually a fan of his works, but this movie is captivating and smart.

“Luca” (Disney+): It pains me to give Disney LGBTQ credit when they haven’t earned it —  i.e., moving “Love, Victor” to Hulu because its content was “too mature” for Disney+. The last time I checked, “The Simpsons” is on Disney+… but I digress. This quirky fish-boy movie is a beautiful allegory for coming out, whether they’ll admit it or not, and is flooded with queer references. Time for Disney to do an openly gay Disney prince movie…

“Love, Simon” and “Love, Victor” (Hulu): An inaccurate — and borderline offensive —  woman’s take on coming out as a gay man. Follow that story up with the casting of the most heterosexual bland actors and you have two perfectly palatable, boring stories for straight people.

“Sex Education” (Netflix): A surprising dishonorable mention, especially because they have some really solid LGBTQ representation — I would’ve loved this show if the main gay plot didn’t revolve around loving your abuser. We need to retire the “fall in love with your homophobic bully” plot, as it’s seriously outdated and posits an astoundingly toxic mindset.

​​Micky is a junior in LAS.