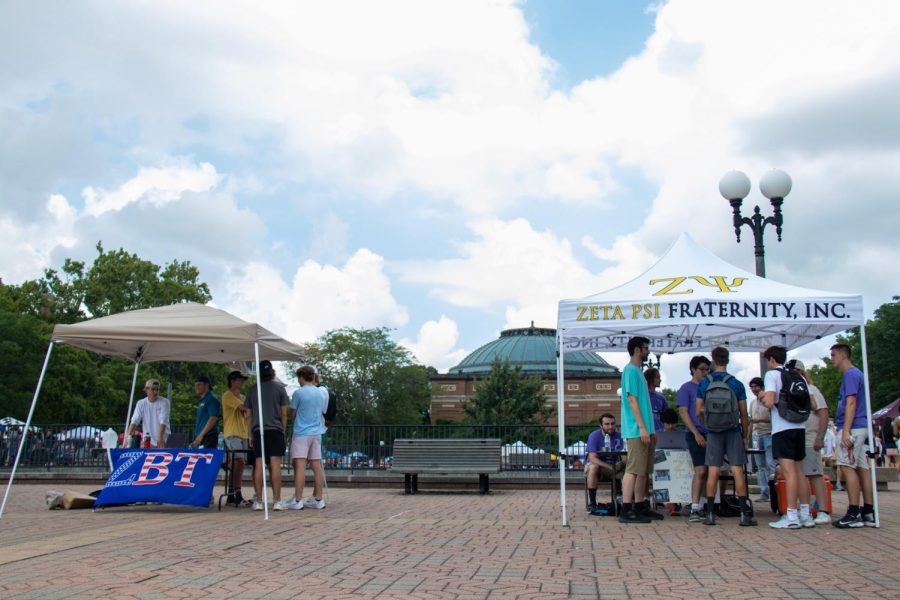 Fraternities Zeta Beta Tau and Zeta Psi stand outside the Undergraduate Library during Quad Day Aug. 22 as they try and recruit new members. Columnist Dennis Austin believes that greek life behaviors are failing the university and its reputation.

The death of Adam Oakes has reaffirmed many people’s beliefs of fraternities and sororities: These organizations are out of order.

Adam was a 19-year-old student at Virginia Commonwealth University and was told by members of the school’s Delta Chi Fraternity to drink an entire bottle of whiskey as part of his pledging process. Back in the spring semester of this year, I provided commentary on the negative impact Greek life had on this school’s pandemic response.

One commenter had remarked that I was spreading ‘hate.’ It is not hate. Statistically, Greek life organizations disproportionately made up significant clusters of coronavirus cases during the previous school year. Multiple Greek organizations had been cited violating school policy and health guidelines. Students suffered suspension, as did some Greek houses.

When you see this situation for what it is, it is nothing more than a community of individuals who feel as if they are above reproach. They do not care about the welfare of the campus community or even their membership. This is another opportunity for these unethical charlatans to act egregiously. The epitome of selfishness engulfs many Greek organizations on this campus and nationwide.

Do not let them fool you with their attempts to shield themselves from criticism by their shameless attempts at highlighting their philanthropic sides on this campus, such as Delta Tau Delta, Pi Kappa Phi and others. If these groups genuinely cared for their community, they would not have put them at unnecessary risk to quench their selfish desires during a pandemic.

This explains the story of Adam Oakes, the multiple violations of COVID-19 precautions last year here and elsewhere, the number of sexual assaults and racism nationwide in other Greek organizations. It is not just the absence of strong-willed leadership to prevent these episodes from happening. It is a systemic failure at all levels.

We must be honest in our assessment here. For these acts to keep happening, these perpetrators must believe that someone or something allows this behavior to continue unabated. That there is a permissive culture whereby injurious behavior is rewarded, not punished. Although truthfully some Greek organizations do not engage under such circumstances, it does not eliminate the fact that their contemporaries lack morals.

While browsing The Daily Illini for related stories, an opinion piece in 2017 argued to disband Greek life on campus. What caught my attention was the visceral discontent some of the commenters had for the author. Rather than seek to engage with their writings, they sought to make personal attacks.

It is emblematic of how cult-like some Greek members are. So attached, so dependent, unable to think for themselves. They see any criticism of their respective groups as a personal attack themselves. Scary how vulnerable some people are to assume the identity of an organization, rather than maintain their independent thinking.

The many stories of depraved acts have not only resulted in black eyes for colleges and universities across the country, but it has also compromised whatever little integrity these Greek organizations had left, if they had any, to begin with. Unfortunately, it has also left behind a trail of broken families. Students were victimized, some who lived to tell their story. Others, much like Adam Oakes, were not that fortunate.

Originally, my purview was that we should not bar these organizations from operating on campus. We have seen that simply banning certain organizations does not guarantee the ceasing of them nor their activities; it only causes them to exist discreetly. However, when reading these stories, I can’t help but ponder if Greek life should exist on any campus. What values do these organizations bring?

Of course, some could say camaraderie and networking — but those can be found anywhere outside of Greek life. I’m not completely sold on the idea of permanent banishment for the reasons stated above, but I wouldn’t shed tears if they ceased to exist.