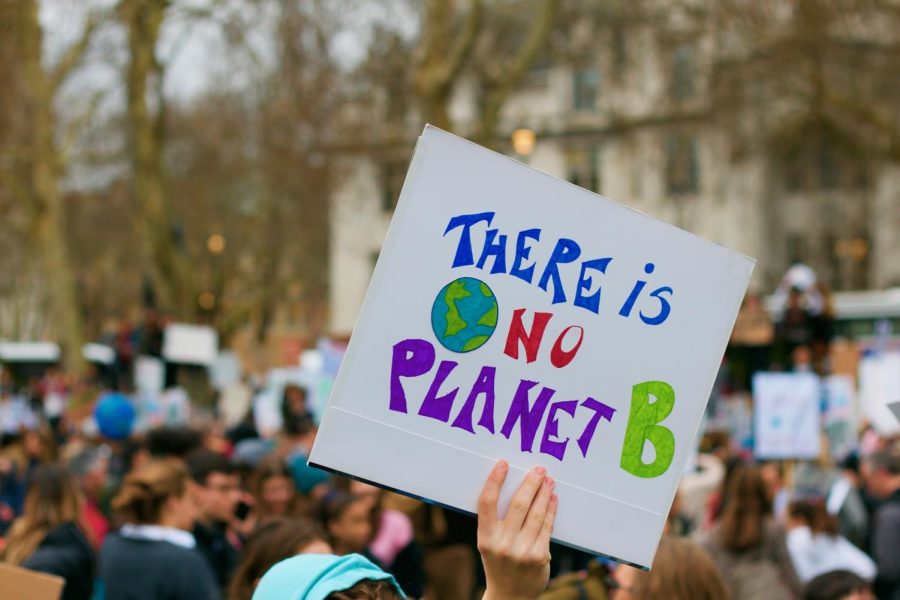 A person holds up a sign saying “There is No Planet B” at a climate change protest. Columnist Caroline Tadla argues that one person’s effort to reduce climate change is not enough to make an impact.

The only effect metals straws have on the planet is inflating the egos of those who live on it.

Let me preface by saying I’m not a climate change denier nor am I a nihilist. I am simply tired of people with a savior complex telling me that I’m killing the environment when all I’m doing is enjoying my oat milk latte.

I understand the environment is important, and I understand that as a society we should all strive to be more eco-friendly. And although metal straws might be a cute start, we need to look beyond trivial things like this and start looking at the bigger picture. For example, bans on single-use plastics altogether.

I too used to believe that the little things I did within my daily life regarding single-use plastics made a difference. That was until I started working at a fast-food restaurant.

The number of straws, lids, cups and utensils discarded daily blew my mind.

I can recall the day I accidentally dropped an industrial-sized package of straws on the ground. I was quickly instructed by my manager to throw them all away, as they were unsanitary for customers. In 20 seconds, I threw away enough straws to last someone a year; I wonder how many times things like this happen.

The sad reality is one person’s effort makes little to no dent in our pollution crisis. Another somber reality is that a majority of those making “efforts” to better the environment are not doing so out of a place of love and compassion for the planet. Instead, they use their metal straw “activism” as a means of social gain and virtue signaling.

The earth is filled to the brim with single-use plastic and Santa Claus isn’t going to come and clean the oceans just because we drink from metal straws. Furthermore, policing those around you about how they drink their coffee does nothing but make you unlikable.

Continuing to support companies and government systems that promote the use of single-use plastics is what we should be focusing on, not whether we grab a plastic straw on our way out or not — because maybe the person after us will accidentally grab two.

Unless companies stop supplying and providing these plastics altogether no difference will be made.

A more reasonable approach would be to attack single-use plastic at the source. As a matter of fact, according to journalists Kelly Bauer and Hannah Alani, “more than 300 cities and 55 countries around the world have banned single-use plastics.”

Not to mention the several universities adopting these principles: As announced by the University of California, Berkeley, the school “has committed to eliminating all non-essential single-use plastic with viable alternatives by 2030.” Why shouldn’t we be next?

Let your voice be heard in a way that matters. Reach out to local companies, administrators and politicians and urge them to join the fight against single-use plastics. Be active in our democracy and elect those who you believe will push the movement forward.