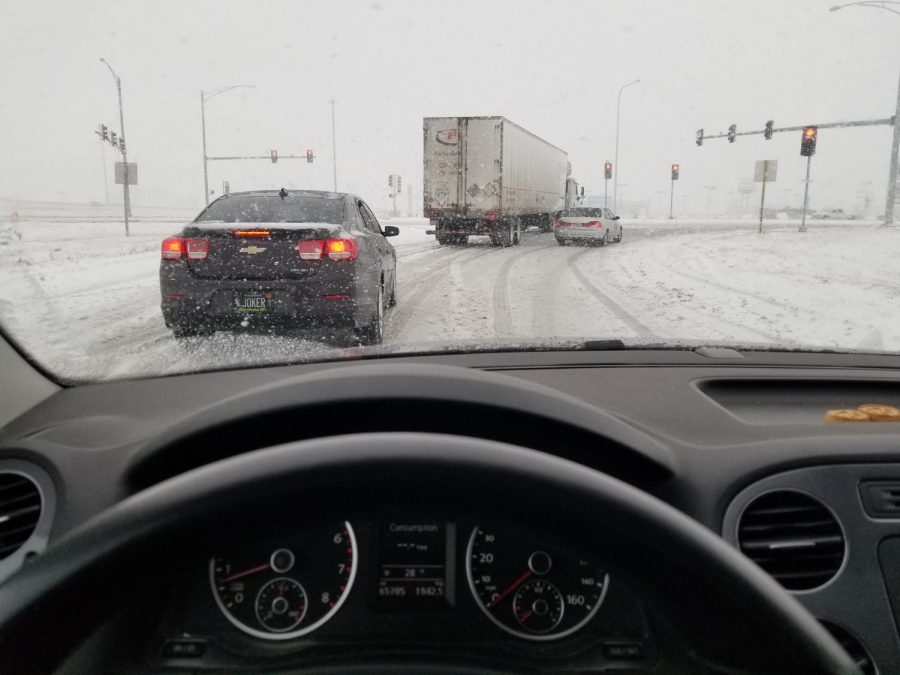 Cars drive along snow-covered roads during the snowstorm that battered the Midwest this past weekend. Columnist Noah writes that while snow in the Midwest is nothing new, some people still tend to jump at the first sign of potentially bad weather.

The world is ending.

Some might believe it’s because of the ongoing fight between President Donald Trump and the Democrats over national security along the country’s southern border. Some might argue it’s because of the government shutdown. While these sentiments could stand true, the world might be ending over something else entirely: a white substance called snow.

No, the world is not actually ending, but because of the low snowfall throughout all of central Illinois this winter, everyone thought it would not come at all. This past weekend, Mother Nature turned the tables when the area received a record-breaking amount of snow from St. Louis all the way to here in Champaign-Urbana, which caused people to prepare for the end of the world.

All of the grocery stores in my hometown, located just 30 miles south of Springfield, Illinois, were packed to the masses. A car filled every single parking space except for the ones in the way back of the lot, which felt like parking at a large arena-type venue for a Taylor Swift concert.

Not only that, almost every food aisle at my local Walmart had its contents wiped clean — the only aisle to be mostly untouched was the toys section. People had bought various food items like milk, eggs, bread and such essentials in bulk, leaving nothing behind but empty shelves.

Now, when one walks into one of the grocery stores, it feels like a ghost town, leaving nothing for people to purchase except for various clothing items and tools. Even the food trucks can’t make it to the stores on time with the next delivery because of ice and snow on the roads.

Along with that, people freaked out over losing power and not being able to drive down any road due to the inclement weather; this, however, is an actual concern. According to The Washington Post, at least nine people died during the storm in the Midwest over the weekend. The snowstorm affected many roads and highways in both my hometown and towns on my way back to campus Sunday.

Over winter break, many of my college friends told me these same problems occurred in their hometowns, too, which includes big cities like Peoria, Illinois, Chicago and the surrounding suburbs.

Horrible road conditions aside, people never cease to amaze me when they overreact over something like this. Yes, we live in the great state of Illinois where the weather fluctuates as frequently as university students debate on whether to attend class or sleep in an extra hour. But everyone should know that snow is coming, and it will not last forever.

Most Illinoisans know, on any given day, it could be below freezing and the next could feel like a nice day to drive with the convertible roof pulled down.

The ever-changing weather like this happens in Illinois every year and people know it. If this were Florida, I could see a reason for people freaking out. But it’s Illinois and the weather will grow warmer in no time.

Noah is a freshman in LAS.
[email protected]