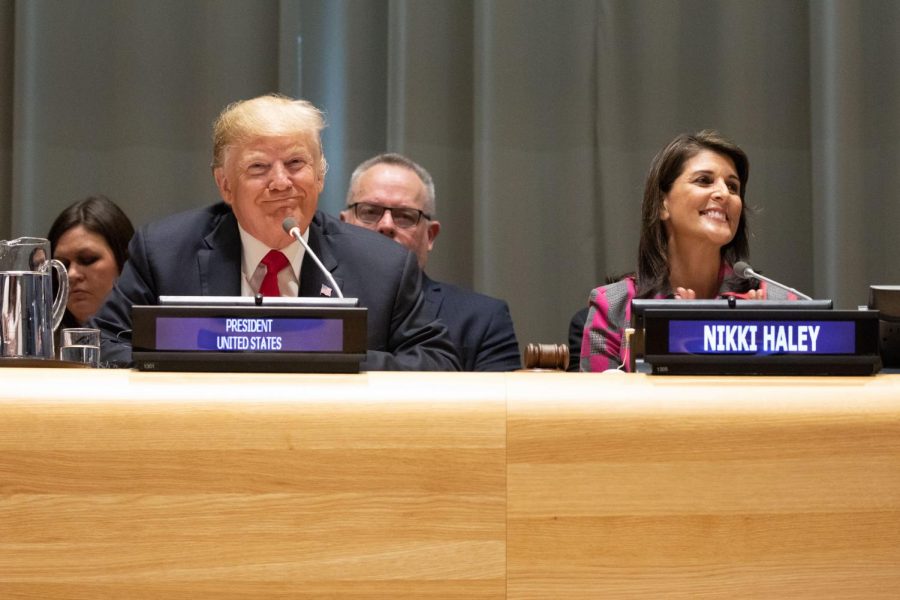 President Donald J. Trump participates in the Global Call to Action on the World Drug Problem. It took place Sept. 24 at the United Nations Headquarters in New York City.

Many analysts eagerly consider President Donald Trump’s substantial number of judges nominated and confirmed, courtesy of Sen. Mitch McConnell’s obstructionism at the end of the Obama administration, when assessing the administration’s legacy. However, they seldom consider the lasting damage the administration has done through its abysmal foreign policy.

Aside from policymaking, one key aspect of international relations every administration has to engage in is choosing U.S. adversaries and allies, as well as an approach to dealing with each one. An administration has to strike a fine balance between applying soft power versus hard power and balancing diplomacy with coercion.

The Trump administration fails to walk the fine line of balancing this.

The administration seems inconsistent on when to be dovish and when to be hawkish. For instance, the administration was swiftly willing to dismantle all diplomatic progress made with Iran and Cuba, but extremely reluctant to reprimand Saudi Arabia for the brutal murder of an American journalist or Russia for its indisputable role in meddling in American elections.

The trouble is the administration’s arbitrary choice in allies and adversaries. The U.S. — through Trump’s repeated criticism toward the European Union, the United Nations and NATO — has abetted this breakdown in quality and competent relationships with traditional allies like Europe, Mexico and Canada.

However, the Trump administration is unnervingly warm to authoritarian governments, some of which are lead by leaders Trump has labeled as strong and effective, such as Saudi Arabia, the Philippines, North Korea or Russia. President Trump has said he is tough on Russia, but unforgettable moments like the Helsinki press conference contradict this.

Yet the administration is contemptuous of countries like Iran, Mexico, Cuba and Venezuela. These countries may be deserving of suspicion, but how is it determining who the enemy is?

The administration also appears completely ignorant to the fragility of international relations and the repercussions following the choices it makes.

For instance, Trump’s constant criticisms of NATO could embolden Russia to pursue hawkish actions against Eastern European states if it perceives a lack of unity within the body. Trump’s reported remarks with senators where he called African countries and Haiti “s—hole countries” certainly soured relations. Trump and North Korean leader Kim Jong Un got into a fight wherein Trump called his nuclear button bigger and termed the leader “little rocket man.”

While the absence of any caution when the president makes a statement is astounding, the president himself is not the only danger to U.S. foreign relations.

Former U.S. ambassador to the U.N. Nikki Haley proved herself equally as dangerous during her tenure. Haley, a well-respected politician for advocating for the removal of the Confederate flag as governor of South Carolina, was a terrible U.N. ambassador and the country ought not to forget.

Haley exposed herself as a hawkish drone installed by the administration to show needless aggression toward allies when she spoke before the U.N. regarding a resolution condemning the U.S. for moving its embassy to Jerusalem. In her disappointingly scornful speech, Haley threatened to revoke U.N. funding from the U.S. and made it clear the U.S. was “taking names” to remember every country that voted against the United States.

Still, the U.N. nearly voted monolithically against Haley. This type of diplomacy, one that relies on inessential hostility toward other democracies, is inefficacious and only embitters relations between the U.S. and the rest of the world.

The only solid commitment the U.S. has made to any of its allies is to Israel, and while its ally status merits a good relationship, it does not translate to automatic and unconditional support. The U.S. withdrew from the United Nations Human Rights Council on the basis the U.S. felt it held an “anti-Israel bias.”

Nevertheless, the alliance does not justify labeling any criticisms of Israel or its interest groups as anti-Semitic in a McCarthyist manner. In fact, the sprightly impulse to label political opponents who speak against Israel as anti-Semitic does nothing but cheapen the label itself.

The U.S. needs to treat allies as allies and adversaries as adversaries. It cannot constantly grant Israel the benefit of the doubt or spew incendiary rhetoric toward Europe, Canada and other long-term allies.

Furthermore, it cannot attempt to mend bad relationships without due caution. President Trump has often posed the question, “Why is it so bad if we get along with Russia?” and the short answer is it is not — if that were what Russia desired as well.

But our adversaries don’t necessarily want a good relationship with this country. They see Trump’s eagerness to rebuild a relationship as an opportunity to undermine the U.S. consequence-free, so long as he continues to rebuke U.S. intelligence. The current administration cannot take these countries at their word, such as when North Korea promised to denuclearize with little oversight or when Russia strongly asserted they did not meddle in the 2016 election.

The U.S. wants to mend poor relationships with authoritarian regimes while appearing tough elsewhere. Nearly half of the U.S. sees the president as a “strong leader,” but Trump isn’t strong.

A strong leader knows when to show restraint, when to be diplomatic in the face of adversity and when to appropriately apply the use of hard power. The president may be pugnacious and petulant in his statements, but his impulsive nature and inability to exercise self-discipline reveal his weaknesses.

“America First” — the Trump administration’s foreign policy enveloped in two buzzwords — has ironically only cost America international leverage and tarnished its reputation through its aggressive nationalism and obstinate isolationism.

The “America First” style of international relations is illusory and, in reality, does nothing but make America finish last.