The Daily Illini Editorial Board endorses Hillary Clinton for president 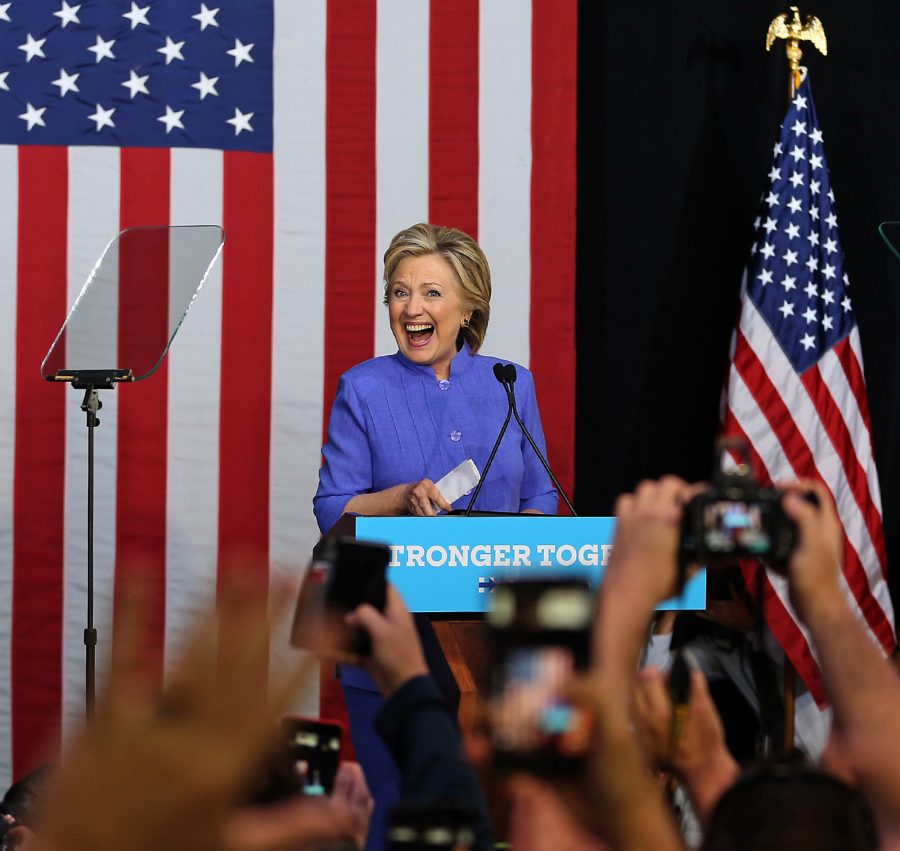 Just a week from Election Day, it still seems like the seminal moment of the 2016 presidential campaign for most Illinois students happened all the way back in March, when Vermont Sen. Bernie Sanders visited campus.

Sanders’ arrival was met with complete pandemonium; students began a line outside the ARC at 5:30 a.m. that Saturday morning — Sanders’ rally didn’t even start until 3 p.m.

The college-centralized craze for Sanders’ self-proclaimed socialist ideology was not unique to the University, but his appearance here added a personal touch to a campaign that had already connected with so many of our fellow students.

The moment Sanders arrived, with talks of free college and environmental concern, his hold on the hearts and minds of University students became several magnitudes tighter.

Two days after Sanders’ visit, the Daily Illini Editorial Board endorsed former Secretary of State Hillary Clinton to be the Democratic nominee for president. It was not a popular choice among students, to say the least.

Backlash aside, the editorial board stood by our decision. While Sanders’ bold ideas about widespread reform were intoxicating to  students, it was in part an idealistic nature that made them so appealing.

To us, Clinton’s proposals seemed more grounded and realistic, and her decades of foreign policy experience to Sanders’ lack thereof was another deciding factor at a time when international relations are of grave importance.

Those factors all still weigh heavily for our editorial board as Clinton prepares for the culmination of her lifetime of public service on election night next week.

But, of course, Clinton is no longer running against Sanders, when the choice came down to two respectable public officials.

During the primary season, we made a plan to present both sides of the November elections in our endorsements, then ultimately offer our preference.

In our endorsement of Rep. Tammy Duckworth for Senate, we followed through on our plan and provided several reasons why others might vote for Sen. Mark Kirk.

To present a “reasonable” case for Trump to be president would be to present a case for a tomato to start at linebacker for the Chicago Bears — though at least that tomato wouldn’t speak.

We refuse to offer a single reason to vote for Trump because we truly believe there isn’t one that isn’t immediately overpowered by one of the millions of reasons not to vote for him.

Take your pick: he has allegedly sexually assaulted several women, he has mocked a reporter’s physical disability, he has said he would impose a ban on all Muslims from entering the U.S.

Within his first 100 days in office, Trump would undoubtedly make dozens of errors much more costly than any Clinton has made in her lifetime of politics.

International negotiations don’t work like the ones Trump claims to have made in the business world: You can’t just say no, go bankrupt and fall back on your nest egg when American lives and careers are at stake.

Donald Trump doesn’t know the first thing about being president of the U.S.

A platform based solely on turning people’s insecurities into hatred — of Barack Obama, of former U.S. President Bill Clinton, of women, of followers of the Islamic religion, of Hispanic people, of black people, of China, of our fellow Americans — has somehow carried him this far, but it can’t carry him any further.

With any other Democratic nominee on the other side of the race, the choice would still be clear. But with Clinton, the choice is simple.

Our earlier endorsement of Clinton for the Democratic nomination leaves us well-positioned to offer a case that doesn’t depend on a “lesser of two evils” argument. We believe that Clinton is and always has been the best candidate for the presidency.

Clinton’s policies align closely with those of our editorial board. She either already held or has adopted nearly every socially liberal policy that we could ask for.

Many criticize her for conveniently changing policies prior to election season, but this is common practice across all of politics.

All that truly matters is whether Clinton will hold true to her supporters’ beliefs when she serves in the Oval Office.

There are more than enough people in place to hold her accountable, particularly if the Democratic Party wins the Senate — yet another reason for students in-state and out to vote Nov. 8.

Clinton’s foreign policy experience is unmatched not only in the race, but in American politics at large. Trump would tell you that it’s “bad experience,” but few politicians come with untarnished records.

Clinton is by no means perfect in this regard, but the gap between our trust in her to negotiate with other countries and our trust in Trump or Libertarian candidate Gary Johnson, who likely couldn’t find said countries on a map in the first place, is wider than the Grand Canyon.

Students are justifiably concerned about Clinton’s level of dedication to their issues. Rest assured, the Clinton administration will take note of Bernie Sanders’ movement.

Clinton understands where the next generation of voting power comes from, and Sanders has already been involved in helping Clinton adjust her education policies to better fit the needs of students and recent graduates who are searching for relief from the incredible burden of rising tuition costs.

None of this is to say that Clinton is guaranteed to be a successful president.

She has proven capable of making extremely poor decisions in the past, such as with her oft-mentioned private email server. Her favorability polling suggests that she would be among the most disliked candidates to ever hold the office of the president.

But we wholeheartedly endorse Hillary Clinton on the backs of everything else she has done to this point. This is not about the lesser of two evils; it’s about delivering our country from one.

But to do so, the millennial generation has to vote, even in a state that is nearly guaranteed to offer its electoral votes to Clinton.

As of Sunday night, FiveThirtyEight’s statistical models put Clinton’s chances of winning at around 80 percent. That is not nearly enough when the 20 percent represents the ascension of a homegrown demagogue to the most powerful position in the known universe.

Many of our fellow students who connected so beautifully with Sanders’ ideas have struggled to come around on Clinton, even after Sanders’ endorsement of Clinton and Clinton’s three dominant debate showings.

We won’t ask students to betray their hearts and match our enthusiasm for Hillary Clinton.

But we won’t hesitate to implore you to vote for her.