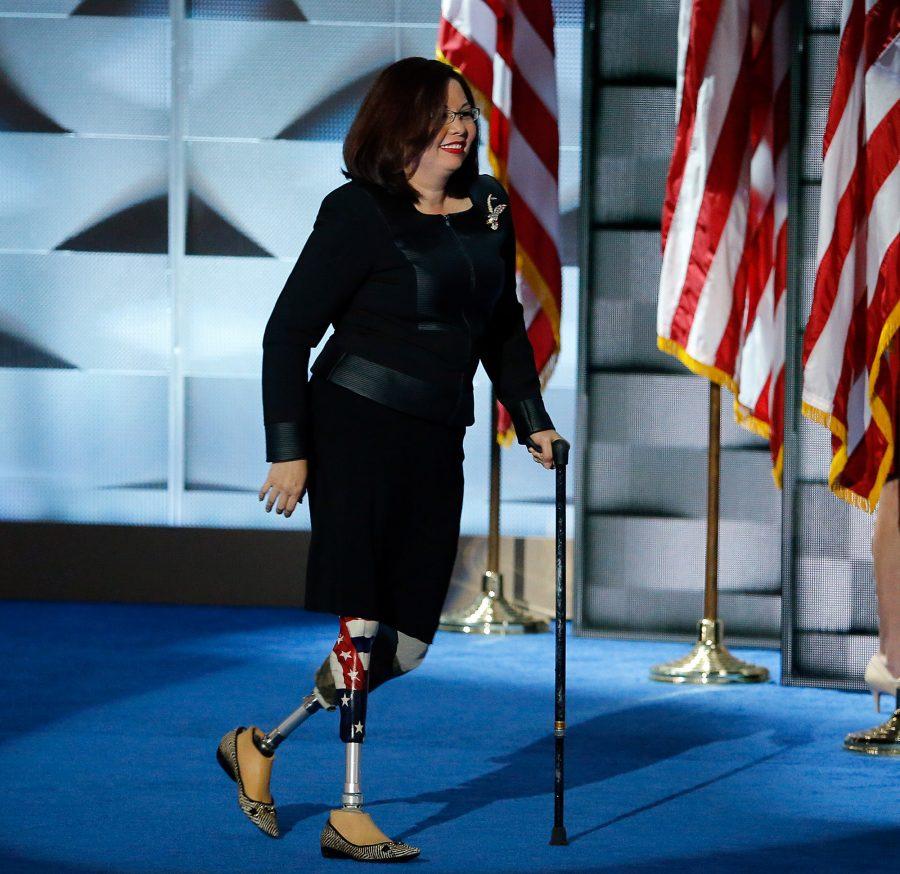 Illinois Rep. Tammy Duckworth walks to the stage to address delegates during the last day of the Democratic National Convention at the Wells Fargo Center in Philadelphia on Thursday, July 28, 2016. (Michael Bryant/Philadelphia Inquirer/TNS)

The then-U.S. senator-elect from Illinois gave the crowd a thumbs up and said: “We are 800 miles from any ocean, but a tsunami just hit the heartland. My name is Mark Kirk and I’m going to replace Roland Burris in the U. S. Senate.”

Many voters thought the election of the Republican congressman from Chicago’s North Shore would be a shift from the status quo and that Kirk could cleanse one of the country’s most corrupt states.

“Tonight, the sun set on a one-party corrupt state. And this Senate seat was just returned to its rightful owners: the people of Illinois,” Kirk said.

But during those six years since Kirk took the oath of office, not much has changed in the way politics have been run on the state or federal level.

Now U.S. Rep. Tammy Duckworth is challenging Kirk for his spot in the hopes of fulfilling, in her own way, the promises of change that Kirk made years ago.

Kirk, the incumbent, has shown an admirable willingness to work for bipartisan compromises during President Barack Obama’s tenure in office, which cannot be said for many senators on either side of the aisle.

The socially moderate Kirk has challenged his party during his political career and at times has suffered because of his stances.

The senator is one of few Republicans to support gay marriage, and he supports the right of a woman to choose when faced with the question of abortion.

Kirk supports background checks for those who wish to purchase firearms, an assault weapons ban and a ban that wouldn’t allow those on the FBI’s terrorist watch list to buy guns. He also co-sponsored a bill that made gun trafficking a federal crime.

For years, Sen. Kirk exemplified some of the collaborative spirit that America needs, not only in Congress, but in the rest of the nation. He is what many voters should want in their public official: someone who is willing to act in the interest of the people he serves, not just the party.

Perhaps his actions were taken opportunistically at times to boost his chances of re-election, but he hasn’t reneged on the policies that made him favorable with Illinois’ residents.

But while our editorial board supports some of Kirk’s history, we have concerns about his present and future. Kirk’s fiscally conservative policies align with a relatively small portion of both our editorial board and our campus, which is one of the chief considerations of our generation as we enter the job market post-graduation.

Health concerns are also a factor for Kirk, who had a stroke in January 2012 at age 52. Although we don’t view this as a key deciding factor for why Kirk shouldn’t be re-elected, like the Chicago Tribune did, it is a concern on the minds of many members of our board and should be a consideration for voters. Much can change in six years — when Kirk won the election in 2010, many of this year’s first time voters were still in junior high school.

Sen. Kirk also created some unneeded controversy, or perhaps showed some of his true colors, during Thursday’s debate with Duckworth.

After Duckworth referenced her family’s long history of military service, Kirk responded with, “I had forgotten that your parents came all the way from Thailand to serve George Washington.”

Kirk has since apologized for the comment, but it’s too late in the election cycle for his regret to wash away the statement.

Duckworth joined the election in 2015 after serving as a representative for Illinois’ eighth district. The Iraq War veteran and former director of the Illinois Department of Veterans Affairs has quickly climbed the political ladder, and now hopes to step into one of the country’s most important offices.

Like Kirk, Duckworth has also shown that she will work with the other side of the aisle. She stuck with her beliefs and voted for a GOP-led bill that made it easier to fire U.S. Department of Veterans Affairs employees who commit misconduct. This has been a common attitude for Duckworth, especially when it involves cracking down on overspending in the military.

Duckworth supports equal pay for equal work and has pushed for total equality for the LGBT community. She wants more services for victims of domestic abuse and funding for the establishments that provide those services.

In a conference call with The Daily Illini Editorial Board, Duckworth emphasized her plan to help young adults refinance their student loans and made it clear that students should still attend college despite rising costs and the less-than-desirable job market.

Duckworth also told the board of her plans to restrict gun control, eliminate the ownership of high-grade weapons and work on relationships between members of violence-stricken communities and those who protect them.

We endorse Rep. Tammy Duckworth with the hope that she can come through on her own promises made during this year’s contentious campaign, and our expectations are high.

Despite the grueling schedule of the last weeks of a campaign, Rep. Duckworth took time to talk to our board to address the concerns of students.

Sen. Kirk did not.

This absolutely did not disqualify Kirk from receiving our endorsement, but we appreciated Duckworth’s devotion to reaching student voters. The vast majority of our conversation was spent discussing how she hopes to help make college more affordable for students who want it, and find alternative educational and career paths for those who don’t.

We are grateful for Sen. Kirk’s service to our country during his political career, but we believe it is time for Illinois to move in a new direction.

Our editorial board hopes that Duckworth can move forward with a similar respect for the position as Kirk showed for several years, but with priorities that better fit the majority of our generation’s desires.

Our state doesn’t need a tsunami; we need someone to support our fellow students and the great people of Illinois.