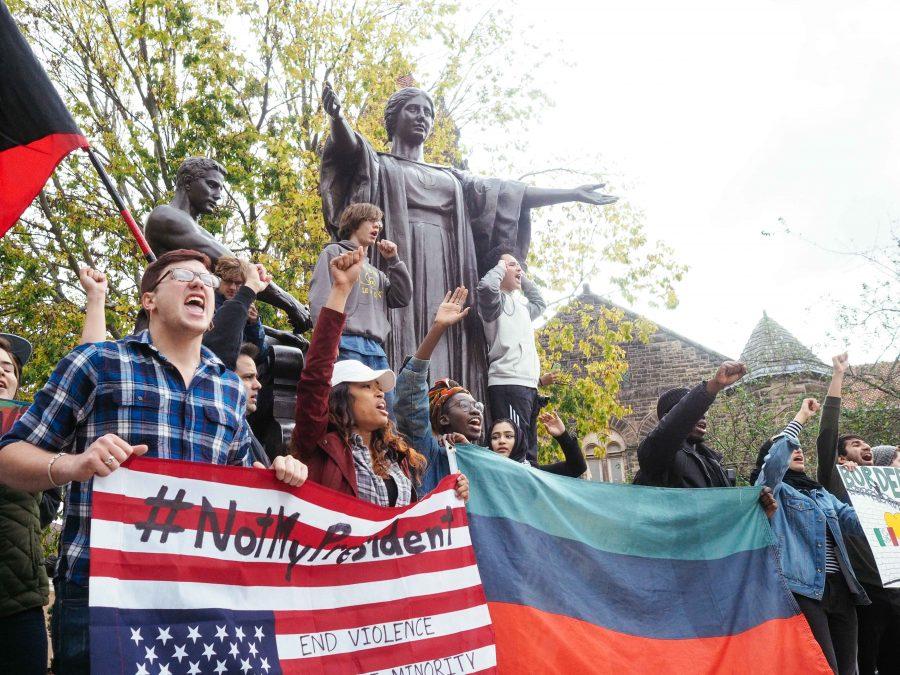 Students gather at Alma Mater to march through the Quad and down Green Street in order to protest President Elect Donald Trump on Friday.

By The Daily Illini Editorial Board
January 19, 2017

On Friday, Donald Trump will be sworn in as the 45th president of the U.S.

While we’ve explained our distrust in the president-elect in past editorials, we are aware that the inevitable is finally happening.

Watching someone who has picked on people of different races, genders, disabilities and more become appointed to the most important and respected position in the country is heartbreaking.

Throughout our lives, adults have stressed the importance of voting, but this election’s results made us feel a bit powerless in the American system.

But then, we remembered what Hillary Clinton said in her concession speech after the election:

“I’ve had successes and setbacks, and sometimes painful ones,” Clinton said. “Many of you are at the beginning of your professional, public, and political careers — you will have successes and setbacks too. This loss hurts, but please never stop believing that fighting for what’s right is worth it.”

It’s worth it to not give up and to keep making your voice heard, as public figures have shown in the weeks before the inauguration.

U.S. representatives such as Georgia’s civil rights icon John Lewis, Texas’ Al Green and Illinois’ Luis Gutierrez are skipping out on the inauguration to show that they do not approve of Trump’s behavior.

Countless entertainers have boycotted the ceremony, such as classical singer Charlotte Church who called Trump a tyrant on Twitter and Broadway star Idina Menzel who suggested he sing something himself.

Even designers such as Tom Ford, Marc Jacobs and Sophie Theallet refused to dress future First Lady Melania Trump because of her husband’s dangerous and offensive rhetoric.

By releasing these statements of disapproval, these public figures have demonstrated the importance of using one’s political voice.

Refusing to dress the president’s wife or perform at the inauguration isn’t something that most college students have an option of doing, but it’s motivation to think what we can do to make a difference.

Call your representatives, even if they weren’t who you wanted to see in office, and voice your concerns or hopes for the coming years.

Participate in a local movement, such as the Women’s March on C-U this Saturday.

There have been many large demonstrations on campus in the past year that have proven students can attract attention.

Days after the election, hundreds of students nearly shut down Green Street while marching to protest the president-elect.

Before that, there was a Black Students for Revolution walkout in October, where students voiced the need for better tuition rates and changes in how sexual violence on campus is handled. In September, there was a Rally against Rape Culture.

If public demonstrations aren’t really your scene, then privately donate to causes that mean something to you. College students may not have much money to spare, but a small contribution can go a long way.

Regardless of how you fight, just don’t be silenced. We can do better than the 3 a.m. tweets our new leader sends.