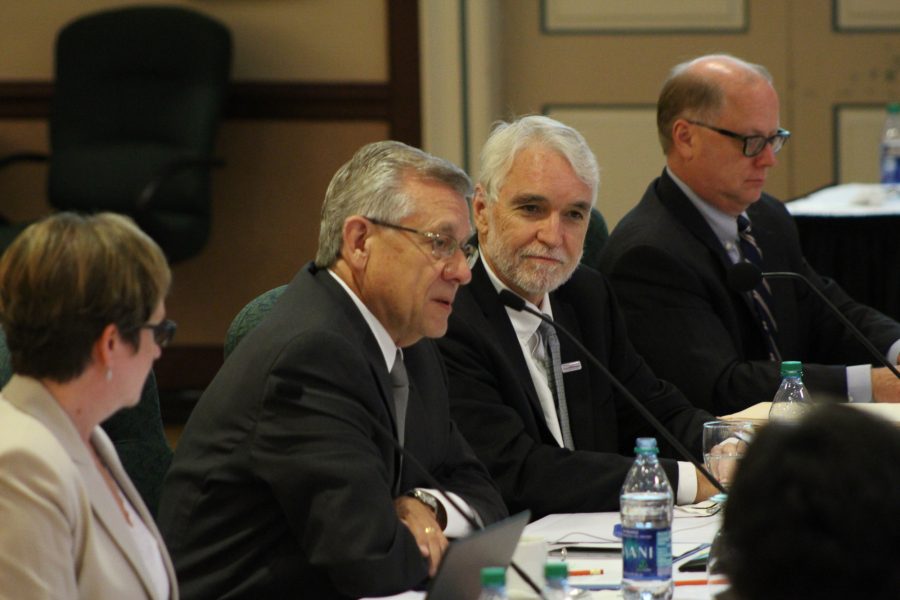 Chairman of the Board Edward L. McMillan and President Timothy Killeen attend the Board of Trustees meeting at the Illini Union on Sept. 8, 2017.

By The Daily Illini Editorial Board
January 23, 2017

University leaders have often invoked the historical mission of the University — to serve as an educational institution for the people of Illinois who may not have any other opportunity to receive higher education — this year in anticipation of the school’s 150-year anniversary.

Much has changed since 1867, including the makeup of the student population. A school that started with the purpose of educating the residents of our state now trains its eyes on other areas of the country and the world.

The school faces a crisis of purpose as Illinois residents increasingly look outside of the state for their education because of the University’s negligence.

The Board of Trustees discussed this issue at its meeting last week. President Timothy Killeen informed the board that the number of Illinois high schoolers is projected to decrease 14 percent by 2031, equaling a net loss of around 16,000 students.

If these students attended schools within the state, it would increase tuition and fee revenue by $215 million. But in search of even more money from out-of-state students, the University continues to follow its plan of looking outside Illinois for students.

This isn’t to say that we don’t understand it. We do.

In order to be considered a first-class institution, the University’s arm must reach as far and wide as it possibly can to influence as many people as possible. It needs name recognition and societal impact to accomplish its goals.

The problem does not stem from broadening the horizons of the school or diversifying the student population. It comes from forgetting its roots — the residents of Illinois.

The people at home must not be forgotten or pushed to the wayside.

The Illinois General Assembly keeps making it hard to serve the poorer students, by underfunding financial aid and the University.

But the solution isn’t to allow these students to go elsewhere. They should be able to look at the University and count on it to serve them. If they can get into the school, money shouldn’t stand in the way.

When President Killeen says students are leaving and the University needs to look in new places to increase enrollment numbers, the logic is wrong. A new problem is occurring, but perhaps there is an old solution. In the past, Illinois residents didn’t flock to other states for college.

So, to the University administration we ask: as the 150-year celebration begins, take some time to return to old ideas and think about how the school used to serve the state. Some of these ideas might still work today.

Instead of turning the sights of the University ever outward, reflect inward and recognize the gifted Illinois students who are willing to pay out-of-state tuition rather than attend “one of the best universities in the world.”

The original purpose of the University is still an important goal. Please don’t discount Illinois when you are striving to change the world.