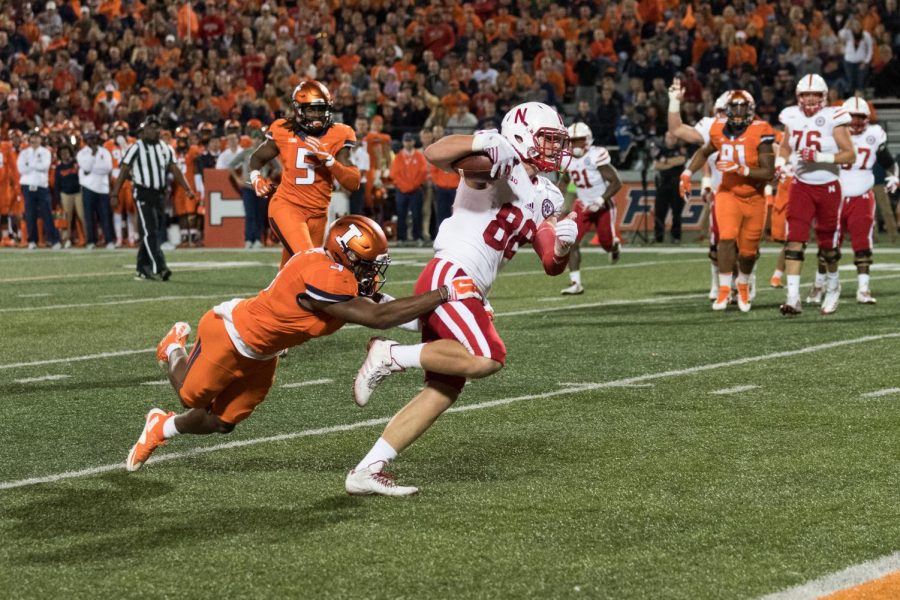 Nebraska scores during the game against Nebraska at Memorial Stadium. The Illini lost 28-6.

By The Daily Illini Editorial Board
February 5, 2018

Do you ever feel guilty watching football players get smacked in the head? Do you think about the ramifications of the brain damage many professional and even recreational football players endure?

Most of us would say no, we don’t really think about it, especially when we are just watching the game for entertainment, rooting for our team with family and friends and enjoying some good Super Bowl eats.

However, for many, it’s ruining the sport entirely and could ultimately cause the demise of football as we know it today.

NBC sportscaster Bob Costas (you might recognize him from Olympic commentary) stayed away from the Super Bowl this year, saying, “I have addressed the issue of football and its undeniable connection to brain trauma many times. Why? Because the evidence is overwhelming and the effects are often devastating. It’s the elephant in the stadium at every game whether others choose to acknowledge it or not. And it’s not going away.”

The brain trauma Costas is referring to is largely the disease that comes from multiple concussions, chronic traumatic encephalopathy. CTE has been known to cause severe mood swings, uncontrollable anger, loss of memory and sometimes even suicide.

It’s the disease that several doctors in the field have hypothesized that O.J. Simpson suffers from, which may have had a part to play in the domestic violence in his past (and ultimate death of his ex-wife Nicole Brown Simpson and her friend Ronald Goldman? Who’s to say?).

Unfortunately, Costas might be right about this issue not going away, at least for now. However, the effects of this “elephant” are taking their toll on the sport itself along with the players.

According to ESPN, television rates for the National Football League in the 2017 season decreased by 9.7 percent, after an 8 percent drop the prior season. Furthermore, CNN informs us that tackle football has lost 18 percent of its youth players this year, while touch football has lost over 30 percent.

Football may be low in numbers with respect to the youth, but it has never been at a loss for fans, seeing how last year’s Super Bowl was the most watched television event in American history.  It’s also unlikely the sport will ever die off altogether, as it is one of America’s favorite pastimes.

But it is fair to ask for more regulations to ensure the health of players, especially seeing as the demise of football as we know it may rise up from the younger generations; more and more parents are not allowing their sons to play football, including half-time performer Justin Timberlake.

While the NFL says it is making football safer, they’ve ultimately failed to deliver any solid evidence that stronger regulations are in place.

As youth football continues to dwindle, the pressure should also be placed on youth leagues such as Pop Warner and the NCAA.

However, it is unclear how new regulations would even help, especially because many view head injuries as an embedded aspect of the sport as a whole.

We’re sure football will still be around in another 50 years, but if trends continue as they are now as new research about CTE comes out, we just aren’t sure the sport will be at the top of its glory for much longer.