No Lovie lost between Northwestern and Illinois 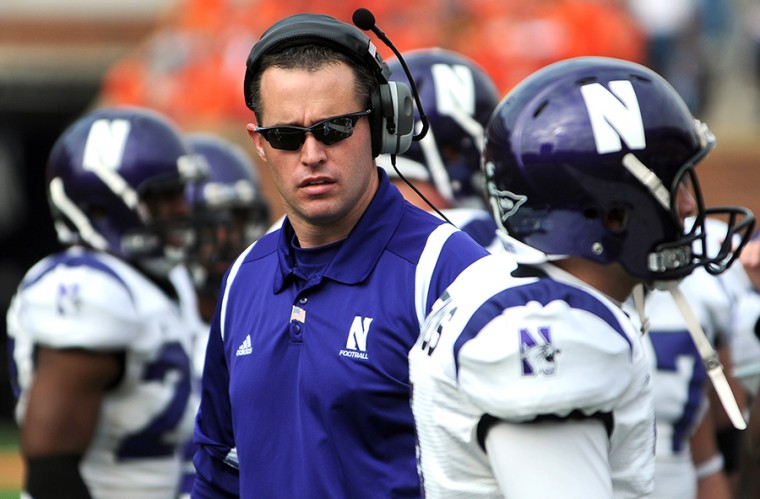 Northwestern head coach Pat Fitzgerald stands on the sidelines during the game against Illinois at Memorial Stadium on Nov. 14, 2009.

The 2016 Big Ten media days in Chicago are in full swing, and a hometown face kicked off the proceedings.

Long-time Northwestern head coach Pat Fitzgerald was the first to address the media at the McCormick Center on Monday afternoon. He took it as an opportunity to be the first to welcome the handful of first-year head coaches to the conference but forgot to mention a name who’s pretty familiar to the area: Illinois head coach Lovie Smith.

The glaring omission gave the Northwestern-Illinois rivalry a new spark — for about 15 minutes. Shortly after Fitzgerald left the podium, he tweeted out an apology for forgetting about his old friend.

Hey @LovieSmith sorry I "fumbled" the presser- WELCOME TO THE @bigten my friend!! #B1GMediaDay

“I apologize again that I forgot,” Fitzgerald said with a smile. “Probably because I’m such good friends with him. But I sent him a tweet, so all’s fair in the world. I would venture to guess he doesn’t care. I know I wouldn’t care if it was him, I’ve got too much respect for him for that.”

Smith and Fitzgerald built a relationship around mutual respect while they each coached their respective teams in the Windy City. Although the friendship remains, a rivalry now exists between the coach of “Chicago’s Big Ten team” and the former man in charge of the Chicago Bears.

That one game comes in the regular season finale Nov. 26 at Ryan Field in Evanston, Ill.

Smith probably won’t put as much of an emphasis on taking home the Land of Lincoln trophy as former head coach Tim Beckman did, but bragging rights are certainly still up for grabs. And since many Northwestern players hail from the Chicago area, adding Smith to the rivalry only gives it an extra edge.

Illinois is 6-10 against Northwestern since 2000, and last season’s 24-14 loss at Soldier Field knocked the Illini out of bowl contention.

Northwestern running back Justin Jackson rushed 37 times for 172 yards and a touchdown in that game, which was a particularly special performance for the native of Carol Stream, Ill., a suburb of Chicago. He grew up watching Smith-coached Bears teams and was in the stands at Solider Field as a fan long before his cleats touched the Kentucky Bluegrass last season.

Jackson agrees that Smith brings a new dimension to the rivalry.

In 2015, Illinois signed a three-year deal for games against Northwestern to be played at Soldier Field. Two games set for 2017 and 2019 remain, and all eyes will be on Smith when he makes his return to the stadium he called home for nine seasons in the NFL.

But aside from recruiting, Chicago is no longer Smith’s domain. And although the Wildcats haven’t hosted the Illini since 2014, they’ll consider next year’s contest at Soldier Field their fourth-straight home game against their rivals from down south.

“Of course, you want to win at home, but we feel like both of those places are home for us,” Walker said. “We appreciate Illinois moving the game to Solider Field for the next couple of years.

“We call ourselves Chicago’s Big Ten team, so we have to earn it.”