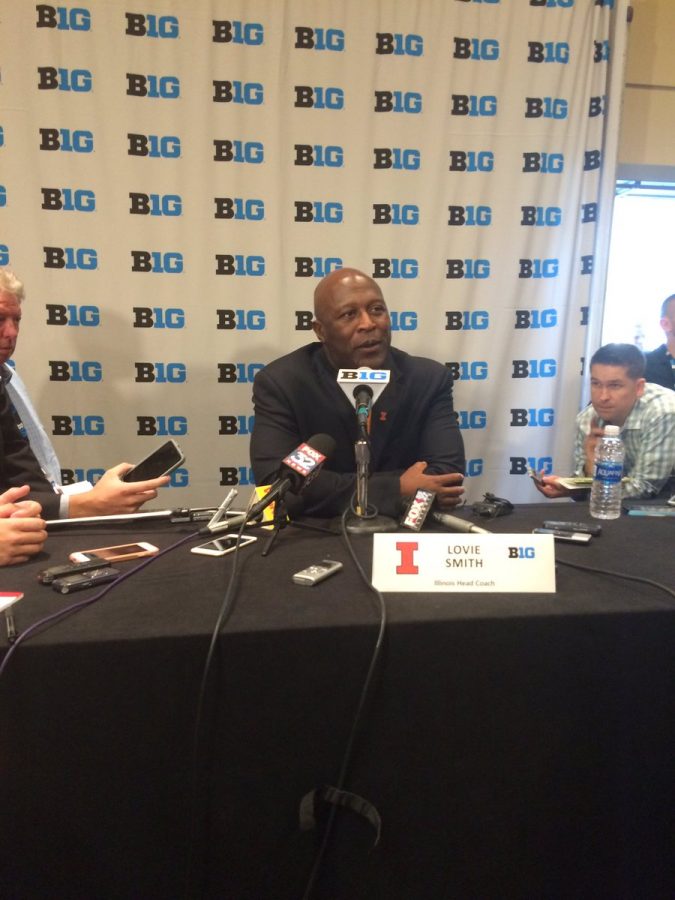 CHICAGO — Illinois football head coach Lovie Smith made his Big Ten Media Day debut Tuesday, bringing a type of football-related buzz to Chicago that hadn’t been there since his days with the Bears.

He didn’t make an appearance until the second day of the event, but Smith was on the tip of everyone’s tongues—players and coaches alike—from the outset. From fellow Big Ten coaches who have studied Smith’s defense to natives of Chicago who grew up watching Smith’s teams, here’s what the big names around the Big Ten had to say about Smith joining the conference.

Northwestern’s lockdown corner grew up in LaGrange Highlands, Illinois and was a big fan of the Bears teams that Smith coached for nine years.

“Lovie Smith — I’m a Chicago guy, I grew up watching the Bears, so he’s a household name,” Harris said.”So just being able to go against a team that he’s in charge of is definitely going to be an honor. That just makes Illinois more competitive, which is what we want. It’s just an honor; it’s a privilege to be in the position that I am and a privilege to be at the University I am.”

The highly-touted running back from Northwestern is a native of Carol Stream, Illinois, and grew up watching Smith lead the Monsters of the Midway. Last season, he rushed for 172 yards against Illinois at Soldier Field, where he always dreamed of playing.

“It’s crazy growing up watching the Bears, and Lovie was the coach, and now playing against him,” Jackson said. “It’s definitely something I didn’t think would happen, but it’s going to be really cool, and obviously he’s going to bring that team to a new level having those NFL ties and that background and that knowledge, especially as a defensive coach. It’s going to be tougher, but we’re going to be looking forward to that challenge.”

Walker admitted he’s a Dallas Cowboys fan, but Smith still has the type of name recognition to make Northwestern’s leading tackler take notice, especially when the Illini roll around on the schedule.

“The fact that they added Lovie Smith this year just the raises the stakes of (our) game,” Walker said. “He’s a great coach. He’s bringing in a great coaching staff, and the players are going to play hard for him. It’s going to be a hard fought battle just like any game in the Big Ten. That’s just one we have to win. We have to beat Illinois.”

During his opening statement Tuesday morning, Smith said he wants the Illini to be known as Chicago’s Big Ten team, along with Northwestern. As the long-time head coach of the team that has originally held this title, Fitzgerald addressed the mutual respect that exists between him and Smith.

“We’ve known each other for a while,” Fitzgerald said. “When he was in Lake Forest, he was incredibly gracious to our staff, and it was great. He had an open door policy, so we were up there as frequently as we could be. His entire staff was great. He’s assembled a terrific staff, he’s got a couple of Wildcats (Garrick McGee and Tim McGarigle) down there that’ll do a great job. I’m sure they’ll be fired up for us in every game but one, and I’ll be fired up for them in every game but one, also. He’ll do a great job.”
Tracy Claeys

Minnesota’s new head coach made his Big Ten media day debut and opened up about the level of respect he has for Smith, whose defensive schemes have become a staple in Claeys’ film sessions.

“We got a chance to know him when he was with the Bears, and his son helped us at Northern Illinois,” Claeys said. “It’s a small world, and things change in a hurry. Last spring, I went and watched a Tampa Bay (Buccaneers) game, and the next thing you know, you look up and Lovie is at the University of Illinois. He’ll do well. He’s a great football coach. We’ve got some of our 4-3 principals off Coach Smith. He does a great job of relating to the kids, so he’ll definitely get them to go on the right track.”

Claeys still studies and makes use of Smith’s innovative Tampa-2 defense to this day.

“We do a lot of similar things,” Claeys said. “He does more of a cover-2 than what we do, but when we study Tampa-2, he’s the guy that we went to do that. So it’s a great hire for the University of Illinois. He’s a terrific person, so he’ll do well.”

Minnesota’s standout linebacker Lynn grew up watching Smith and was even closer to Smith than most other opposing players.

“It’s awesome,” Lynn said. “Actually, his son played for Lake Forest and that’s one of our rivals in our conference, and I actually got to meet Lovie when I was younger at Lake Zurich high school. It’s great for the state of Illinois to have Lovie Smith back. I know people love him, so it’s good for Illinois.”

Indiana’s all-American offensive lineman is another player from the Chicagoland area who has been familiar with Smith for a long time.

“I think it’ll be really cool,” Feeney said. “I grew up a Bears fan, so it’s cool seeing Lovie Smith in the college arena since I grew up watching him.”

Wisconsin’s all-Big Ten linebacker is well-aware of Smith, but not because he idolized him like the previous players—growing up a Packers fan, Biegel knows Smith as the guy in charge of the team he loved to watch Green Bay beat.

“It’s funny how it all works out,” Biegel said. “It was kind of surreal for me to come here today and see Jim Harbaugh, Lovie Smith, all the coaches in the Big Ten. It’s been fun. I’m really looking forward to it. I’m going to prepare for Illinois and Lovie Smith like I am for any other team—I have a lot of respect for all the teams in the Big Ten.”

As a fellow first-year head coach in the Big Ten also looking to lead his respective program out of a patch of extended turmoil, Rutgers’ Ash had nothing but kind words for Smith.

“It creates more competition—a higher level,” Ash said. “I’ve been a huge fan of Coach Smith for a long time. As a young coach, I used to go over to the Bears and watch him practice and study with him a lot. I’ve got nothing but the utmost respect for him and what he’s done in his career. To be a competitor with him in this league — it’s actually kind of humbling to say that. I think he’s going to bring a wealth of experience and knowledge and coaching ability to Illinois.”

After spending many years on many different coaching staffs, Durkin is set to make his head coaching debut with Maryland. He also expressed his excitement.

“There’s a tremendous amount of coaching experience and exposure,” Durkin said. “It’s great for our conference. He’s raised the level of coaching and competitiveness in our conference for sure. He’s obviously had a great track record, not only as a head coach, but as an assistant in a lot of places and has done well at the highest level. So it’s great for all of us.”

Purdue’s head coach doesn’t have many direct connections with Smith but was impressed with the hire nonetheless.

“I think Lovie will do a great job for Illinois,” Hazell said. “He’s been out of the college game for a little, but he’ll adjust quickly and do well. You want to see him have some success, except for one week. I’ve always admired him from afar, with some of the things that he’s been able to do as a coach.”

Perhaps the most high-profile figure at this year’s event, Michigan’s head coach spent plenty of time addressing various topics, such as satellite camps, Twitter controversies and his admiration for his own players. The coach took a minute to mention Smith as well, whom he coached against in the NFL.

“It ratchets it up again, you know,” Harbaugh said. “From the beginning, I was really impressed with the talent level of the players in the Big Ten—real guys, real football players. And the coaching, I thought, was outstanding week in and week out—a football fight every single week. And now again, with Lovie Smith, another great coach. He’s a proven winner all the way. A champion.”