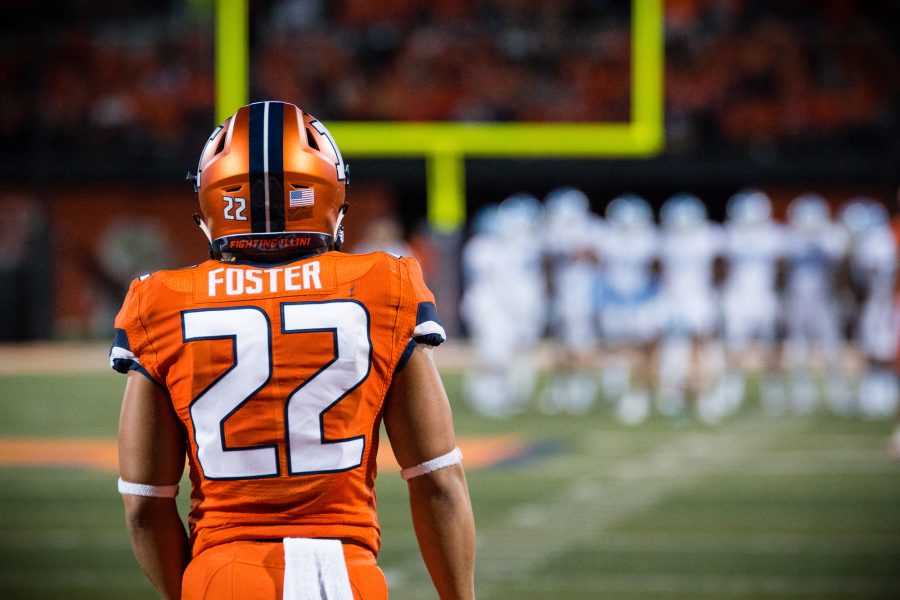 Illinois running back Kendrick Foster (22) waits for North Carolina to kickoff during the game against North Carolina at Memorial Stadium on Saturday, September 10. The Illini loss 48-23.

The Illinois football team is back in familiar territory for its first Big Ten home game against Purdue on Saturday.

In his first season as head coach, Lovie Smith has claimed he’s still learning a lot about his Big Ten opponents, but he already knows what’s at stake when the Boilermakers come to town — the Purdue Cannon.

“We’re excited about playing for the Cannon this week against a Purdue team that’s coming off a disappointing loss, also,” Smith said.

Since 1905, the Purdue Cannon has been a mainstay in the two schools’ football rivalry, in which Illinois has come out on top in two of the past three seasons.

This season, the Boilermakers finished their non-conference slate with two wins, already matching their win total from all of last season. Though, they’re fresh off a 50-7 drubbing at the hands of Maryland, during which the Terrapins managed 400 yards on the ground.

In its loss to Nebraska, Illinois saw success from its running game, so putting the ball in the hands of tailbacks Reggie Corbin and Kendrick Foster could prove to be the game plan once again this week.

Corbin and Foster each had 30-yard runs against the Cornhuskers.

“It’s always fun when you make a hole or make a block and then you see them get five or six yards and then they bust it for another 20 or 25,” said sophomore offensive lineman Nick Allegretti. “It makes our job a lot easier, and it’s awesome to see them run downfield. It’s definitely encouraging to us to see both sides carrying the load.”

Purdue has given up the third-most rushing yards in the Big Ten, and its front seven was off-balance against Maryland’s zone-read running scheme. Although quarterback Wes Lunt is no threat to run the ball, he stands to benefit from the refreshed run game, especially with Illinois’ recent offensive commitment to a no-huddle offense.

“Offensively, we felt more confident with the game plan, going into the no-huddle attack,” Lunt said. “I’ve ran it my whole life, and since I’ve been here at Illinois, we’ve ran no huddle; it’s the only thing we’ve had. Getting back to that made guys more comfortable.”

The Illini defense finally forced a couple of turnovers against Nebraska and will have a chance to continue that streak against the Boilermakers: Sophomore quarterback David Blough has already thrown seven interceptions, including a four-pick game against Cincinnati.

Purdue also managed just 10 rushing yards against Maryland, and its leading runner, Markell Jones, is questionable for Saturday’s game with a shoulder injury.

Although Purdue has consistently been at the bottom of the conference for the past few seasons, Smith doesn’t believe the Illini are in the position to underestimate any opponent.

“You look at their record, and I’m talking last game, you look at their scores and that’s not what you see early on,” Smith said. “It’s a big game for us again. They’re a capable team. I’m very impressed with their offensive line. It’s a Big Ten game with history, and that’s all you really need to know.”