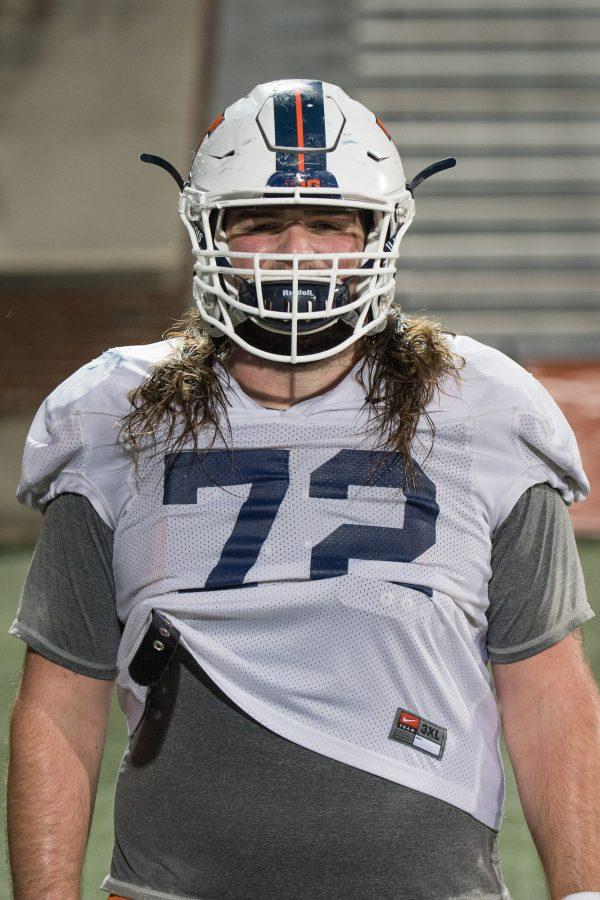 On the field is Gabriel Joshua Megginson, a hulking 6-foot-5, 300-pound offensive lineman who is making a name for himself in his first season as a full-time blocker in the Big Ten.

Off the field is Gooey Megginson, a sophomore from Jacksonville, Illinois, who prides himself in cracking jokes, making people uncomfortable and finding the dankest memes on Twitter.

This is no Dr. Jekyll and Mr. Hyde situation, though — more often than not, Gooey takes control over Gabriel, and that’s just how Megginson likes it.

“I just like to let it loose, that’s me,” Megginson said. “I don’t like to be serious all the time.”

It only takes about 10 minutes with Megginson to realize that ‘serious’ certainly isn’t the word to describe him.

He showed the general public just how far from serious he can be during an off-kilter interview with the Big Ten Network at the end of September. Topics spanned the hypnotic power of Megginson’s eyes, his cat-focused fashion sense and his love for Egyptians and Mariah Carey.

Although Megginson is well into his second season with Illinois, some of his teammates didn’t truly know how odd he could be until seeing his coming out party on BTN.

“I know the kid’s a pretty weird guy, but that interview made me think a lot differently of what I thought of him originally,” junior offensive lineman Christian DiLauro said. “He went a little more off the rails than I thought he would on that one.”

Every football team is full of unique personalities, but Megginson has separated himself with his unorthodox sense of humor that remains present in the locker room no matter the situation.

This wasn’t always the case, though. Megginson struggled to find his voice last season when he redshirted in his first year as an Illini. As is his custom, Megginson searched for opportunities to crack a joke or showcase his strange side, but it took him a while to build the necessary comfort — especially after trying and failing to be funny following the week two loss at North Carolina.

“I was like ‘Alright, I’m just going to be quiet the rest of the year,” Megginson said. “It was just being that scared little freshman — we all were. I was really trying not to get in the way of things. But now I’m trying to be funny around the locker room and trying to talk to everybody.”

For much of his redshirt season, Megginson was on the non-travel list, which served to be a blessing in disguise for his search for a voice. The scout team allowed Megginson to become good friends with sophomore offensive lineman Matt Long, also known as the leader and co-creator of the Illini Goon Squad.

The Goon Squad is an unofficial group within the team that prioritizes their own unique sense of humor, or “goonery,” above all else. Much of their exploits can be seen on their own personal Twitter page, which has garnered over 200 followers since being created in August.

According to Megginson, initiation is ultra-exclusive and requires the completion of a “goon-off.”

“I wasn’t even initiated until the last game of the season last year,” Megginson said. “It was really just like, ‘Hey we’re scout team dudes, we were just here (in Champaign) last year, so let’s be some freakin’ goons. We just go out there and have some fun.”

Further information on a goon-off is classified according to Megginson.

With the support of the Goon Squad behind him, Megginson has allowed his true personality to flourish in all situations this season.

He shines the brightest in the locker room, where he spearheads conversations on where the O-line will get their next meal — or “diesel fuel up” as he put it — and takes control of the aux cord to play his favorite jam, “It’s a Great Day to Be Alive” by Travis Tritt.

It’s these small locker room interactions that have allowed Megginson to find his niche.

“As a freshman last year, I didn’t feel as involved, but now it’s cool feeling a little older and staying together no matter what,” Megginson said. “These are my dudes.”

As the Illini suffer through their first four-game losing streak since 2013, the type of levity Megginson can provide is as important as ever. He said he enjoys taking it upon himself to cut down on the seriousness of football by bringing humor — no matter how weird his version may be — to the team.

“At the end of the day, having guys like Gabe helps you calm yourself down from thinking the worst things,” DiLauro said. “It just helps to make it a lot better experience for yourself and for the team in general. He keeps the morale up.”

And although Megginson’s humor always comes in good nature, he certainly keeps the rest of his teammates on their toes.

“You can only imagine what’s going on in his head,” DiLauro said.

“I try to make people feel uncomfortable,” Megginson said. “That’s a goal of mine.”