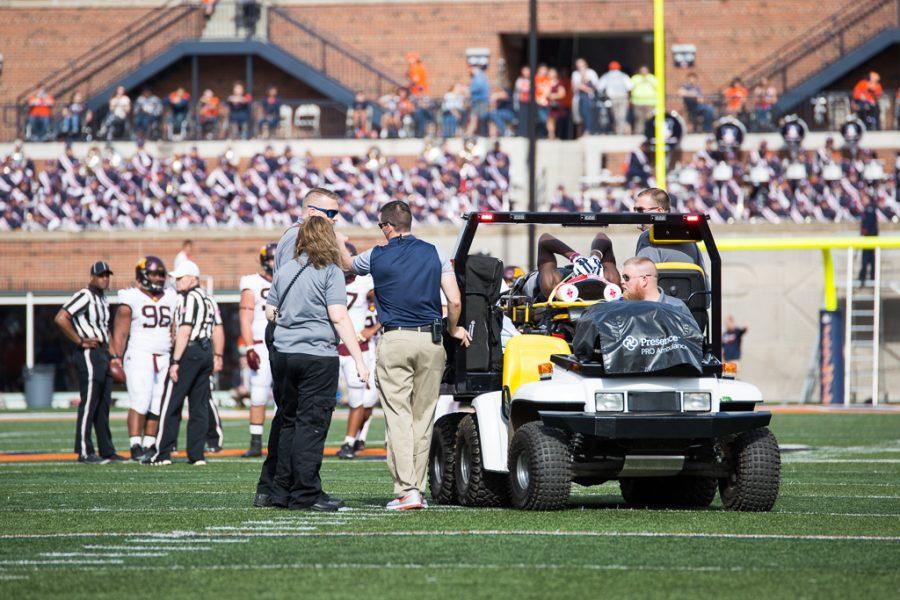 Illinois wide receiver Malik Turner (11) holds onto his head while being carted off the field after an injury during the first half of the game against Minnesota at Memorial Stadium on Saturday October 29. The Illini are losing 14-7 at half.

With less than two minutes remaining in the first quarter, Illinois wide receiver Malik Turner was pummeled to the ground with a head-to-head hit.

He was knocked out in an almost 10-minute delay of game.

In that span, the call was reviewed and confirmed. Minnesota’s Duke McGhee was ejected for targeting, and he left the field to boos.

All fans and players could do was cringe and watch in silence. It was pain staking to watch him lay motionless on the field, surrounded by medical staff and coaches with other players just feet away.

The cart came out for Turner and players on both sidelines were huddled together. When Turner finally left the field with hands over his face, the entire stadium erupted in cheers, including applause from the Golden Gophers.

Then just a little while later, in the time between the first and second quarters, Illini great Dick Butkus was honored as the inaugural member of the Illinois Athletics Hall of Fame. He was awarded a standing ovation and the loudest cheers the crowd had given all game.

It was a welcome relief for a crowd drained from Turner’s injury and a losing score. It was also an interesting contradiction.

Next to Red Grange, Butkus is the most famous athlete in Illini history.

But Butkus has also notoriously given his body for a game that’s extremely physical. Bodies are going after bodies in every play. He’s a man that’s honored for what he did for the game: a style of play that obliterated opponents on the gridiron.

And it’s a rare day to escape a game without injuries.

In the third quarter, Dominic Thieman went down and was helped off the field, heading to the locker rooms. Then in the fourth, running back Ke’Shawn Vaughn was helped to the locker room. Smith announced after that second string quarterback Chayce Crouch had season-ending shoulder surgery earlier in the week.

Illinois, like so many other football teams, is riddled with injuries. But that’s just part of the game.

Throughout the pregame, we talked about how much physical adversity Butkus went through and supposedly did so he could play. Football is football in part because of its physicality.

My mom never let my brother play because he’s such a skinny kid and would have been taken out on the field. He likely would have never made it to the high school/college level, and McGhee pounded Turner with a Big Ten hit.

My brother would’ve started playing football maybe 15 years ago. In that span, so much has changed regarding the conversation around injuries and the game.

Offensive lineman Nick Allegretti said after the game that things are changing, but he wouldn’t change his experience for anything.

Butkus said something very similar about his time at Illinois at the press conference announcing the Hall of Fame on Thursday.

He didn’t mention injuries, but football and Illinois made him the man he is today.

It’s a game that means a heck of a lot to more than just the fans and former Illini returning for Homecoming this weekend.

And though old age itself could be to blame, the wear of the game shows. When Butkus walked off the field after being honored, you could tell his knees give him trouble.

But the image of a 20-year old being carted off the field is a reminder that there is much more on the line than wins and losses.

Charlotte is a senior in media