Halloween serves as religious holiday for some Pagan students 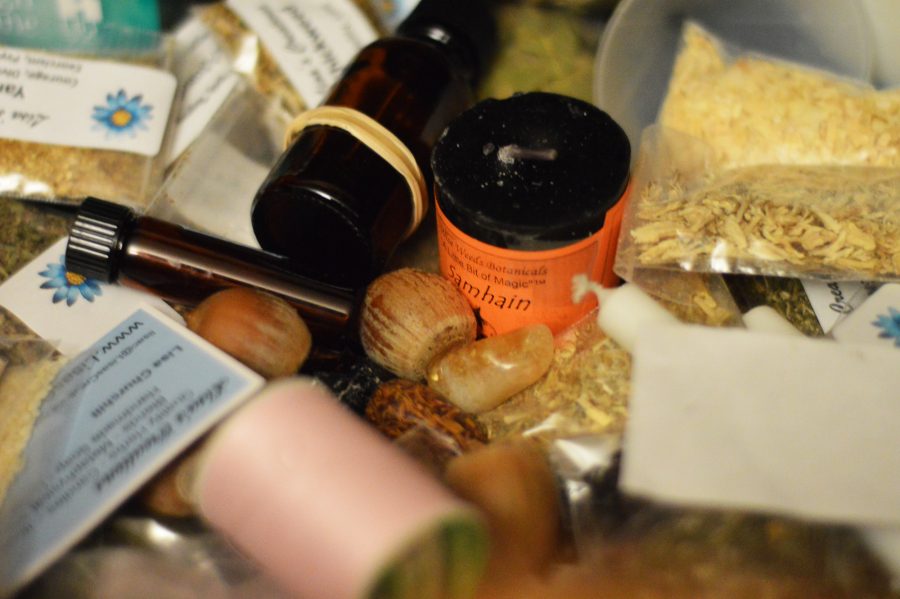 An assortment of herbs and supplies used by Clare Darnall for casting spells and celebrating Samhain.

After Halloween when the candy and costumes are put away, Lauren Jakobsson will still identify as a witch and a Pagan.

The term Paganism was developed to encompass beliefs that fall outside of the three Abrahamic religions of Islam, Christianity and Judaism.

Jakobsson, sophomore in LAS, said Paganism is often considered a “lesser form” of the Wiccan religion: a spiritual form of witchcraft that focuses on nature and harmony.

“You know people consider themselves like, diet Christians, and only celebrate big holidays like Easter?” she said. “It’s like the same thing as being a Pagan.”

One of these big holidays for Jakobsson is Halloween. Samhain, which falls on Halloween, is one of the four Greater Sabbats that Paganism recognizes.

Samhain is known as the darkest time of the year as it focuses on death, darkness and mortality. She compares it to the Mexican holiday of Día de los Muertos, a day to celebrate the lives of the dead.

To celebrate the day, Jakobsson will make an altar in her dorm room.

“An altar for Pagans includes candles, and two statues, one of the Green Man and one of the Moon Goddess — and fruits and vegetables,” she said. “Again, it’s just another method of sending your wishes out there.”

While anybody can become Pagan, Jakobsson got involved in the practices through her grandmother, mother and aunt.

Jakobsson personally doesn’t cast spells. Instead, her family refers to it as “putting good energy out there.”

“Spells aren’t real. You aren’t going to be turned into a frog,” she said. “It’s very similar to when someone says ‘I’m praying for you.’ It’s more of a prayer.”

Still, Meghedi Tamazian, sophomore in LAS, said she’s been hexed before by a witch on campus and felt very much affected.

Considering herself a superstitious person, Tamazian researched the topic, hearing she’d been hexed.

She learned that a hex is like a curse, but it’s broken because someone knows about it, while a curse is not.

Tamazian said she was hexed by an exfriend, and once she found out about the hex, her symptoms disappeared.

She randomly got sick and had a fever and was sneezing for almost 10 days. She later realized this was a result of her hex.

“I also had this one day where I was deeply sad for no reason, I couldn’t even tell you why,” she said. “I didn’t go to any of my classes.”

Some like Jakobsson said putting negative energy into the world, such as casting curses or hexes, is often seen as a bad idea because of the “three-fold rule.”

“If you send negative energy out (or) if you wish bad things for someone, that energy will come back and hit you three times as hard,” she said. “If you are going to do something negative, such as ‘cursing someone,’ you always have to put protection around you.”

She recalled a time in which the rule seemed to take place within her own family, after her grandmother cast a monetary spell.

“She didn’t do the proper proceedings and the next day she was going to the bathroom, and she ended up tripping on something and hitting her nail on a granite table,” she said. “She ripped her nail out, all the way down (her finger). It was a strange injury and she chalked it up to not doing (the spell) the right way.”

Most Pagans and witches use a Book of Shadows, which consists of rules and acts as a handwritten Bible.

Jakobsson said Pagans make the book themselves when they start learning about the religion.

According to Jakobsson, witchcraft is meant to be very solitary, except in the case of covens. There are no covens on campus that Jakobsson is aware of. A coven would consist of a group of Pagans that gather to celebrate main holidays together.

While there may not be any covens, Jakobsson is not the only Pagan on campus.

Clare Darnall, sophomore in ACES, identifies as a witch. She’s learned to perform spells and practice the craft mainly through online research, including stumbling upon Tumblr blogs. Like Jakobsson, she also plans on celebrating Samhain, the day when the veil between the living and the dead is the thinnest.

Although some people dress up like a witch as a lighthearted costume on Halloween, Darnall isn’t offended.

“I dress up as a witch every day of the year,” she said. “It’s always my backup costume.”

Still, though, both Darnall and Jakobsson agree that there are often misconceptions surrounding their practices.

The silver necklace charm that hangs around Jakobsson’s neck is often mistaken for a pentagram, an upside down star usually associated with worshipping Satan.

However, Jakobsson’s charm is a pentacle give her mother as a good luck charm. In the Pagan religion, it represents a love for nature and offers the wearer protection.

“A lot of people think Paganism is the same as Satanism, which it is not,” she said.

Darnall agrees with the sentiment.

“I don’t have any superpowers, but I feel like people get really freaked out,” Darnall said.

“I feel like there are negative connotations toward witches and Pagan and Wiccan,” Darnall said. “All of those, just in general, just have this mystery. It kind of freaks people out. It’s not something you put in your Tinder bio.”