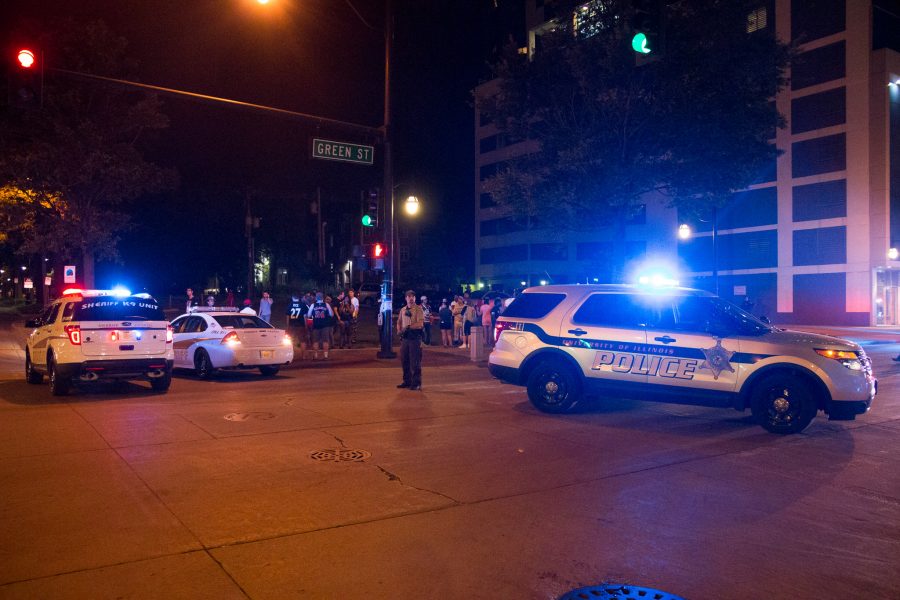 Police cars are parked at the intersection of Green and Fourth streets after a shooting that took place Sept. 25.

Read the police report from University of Illinois Police Officers regarding the stolen cell phone.

A stolen cell phone ignited a debate about a larger issue on campus: inclusion and diversity.

The Academic Senate voted on a resolution Monday to urge reaffirmation of the commitment to on-campus inclusion and to develop a set of best practices with the University of Illinois Police Department for circumstances when law enforcement enters classrooms and residence halls in non-emergency situations.

The resolution also calls for clear sanctions to be created for acts of intolerance, especially against unrepresented groups, and for the Academic Senate to receive summaries of any reports or actions on incidences of aggression, hate and bullying.

Students voiced concerns of feeling racially vulnerable, especially after a divisive presidential election and an unsavory interaction with the University of Illinois Police Department in October. The resolution passed 97-17.

Some urged the Senate to send the resolution back to committee for further development as others criticized the move, saying it would effectively kill the resolution and signal that hate and intolerance are acceptable on campus.

University police officers were searching for a student’s stolen cellphone. It was taken after a student reported leaving his phone in an unlocked locker room at the Activities and Recreation Center while showering on Sept. 29, according to the police report.

On Oct. 10, police tracked the cell phone to a classroom in Lincoln Hall and Officers Ezzard Hoskins and Rodney Mitchell stood outside not wanting to interrupt the class, according to Chief of Police Jeff Christensen. Associate Professor of African-American Studies Erik McDuffie noticed officers standing outside and approached them, allowing the officers to explain the situation.

Christensen said it is against their protocol to enter the classroom unless it is a matter of personal safety, and even then it is under very limited circumstances. He said they only entered because students noticed them outside of the room, prompting McDuffie to inquire about their presence.

“While we want to get the stolen property, we also do not want to enter the classroom and cause any distractions,” Christensen said.

With permission from McDuffie, officers went inside and asked if anyone had an iPhone 6 Plus, according to the report. Two male students raised their hands and officers had them exit the classroom. Upon comparing serial numbers, the officers saw it was a stolen phone and the student explained he purchased the phone from someone else for $125.

The student said he knew the phone was stolen and “knew it was wrong,” and returned the phone back to the police officers. The student was not criminally charged.

McDuffie allowed the officers to enter his classroom, but said the encounter was “terrifying.” He said for days all he thought about was worst case scenarios, such as what would have happened if a student attacked the police or if the officers had put a hand on the student.

McDuffie said the topics discussed in his classroom deal with community and police relations, racial stereotypes and political and social constructs, according to the report.

“Christensen himself said there was and there wasn’t a policy about police entering classrooms, so the police themselves don’t know what the policy is per se,” McDuffie said. “What happened in my classroom is just a part, a piece and it’s part of a much larger part of policing on campus, the way in which so many students of people of color and their allies feel unsafe around the police.”

McDuffie dismissed class early because he was concerned for the safety of his students. He said he believed there was a high probability the police would conduct acts of violence toward students, according to the report.

However, Hoskins, an African-American police officer, said while he is sensitive to stereotypical views often expressed in the media and throughout America that African-American males are criminals, he knows this is not true.

Chief Christensen said he is already having conversations with Chancellor Robert Jones and members of the Committee on Equal Opportunity and Inclusion about creating best practices. He said the department is looking at peer campus protocols. Some University police officers are attending a Big Ten law enforcement conference this weekend and are inquiring what their peers do.

“Jeff and a lot of different police officers ask for opportunities to work with students so that marginalized students do not feel that the police is against them,” Lewis said. “We have conversations every month with the police and they ask us each time what they can do to make students feel safe.”

Lewis said he has no doubts in his mind that anyone at the police department would be against going over the practices and said this resolution is asking for accountability.

Jones said he spoke with Christensen during initial meetings as chancellor.

“He is very open in this regard and we just have to utilize this as an opportunity to step back, look at our practices and see if there are some things we could do differently,” Jones said. “Do we always get it right? Things happen and officers get deployed to retrieve stolen property.”

Angelica LaVito contributed to this report.