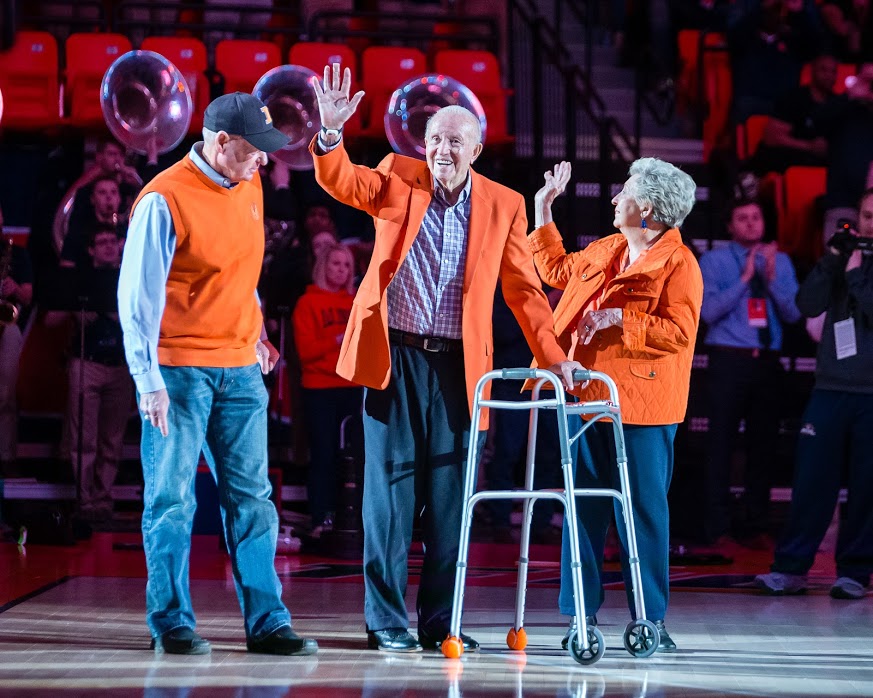 Former Illinois head coach Lou Henson is recognized at halftime in the game against Penn State at State Farm Center on Saturday, Feb. 23, 2019.

College Basketball Hall of Fame member and Illini coaching legend Lou Henson has passed away at the age of 88 this past Saturday, Loren Tate from The News-Gazette reported Wednesday morning.

Know for his bright orange sports coat, Henson, who coached the Illini from 1975-1996, was lured to Champaign from New Mexico State after leading the Aggies to unprecedented success, including an appearance in the 1970 Final Four. Prior to Henson joining Illinois, the Illini hadn’t made an NCAA tournament in 12 years and went 8-18 in the year prior. After a few seasons of rebuilding the Illini program, Henson and his program became a top tier Big Ten program, making the tournament twelve times in his tenure.

Able to break into Chicago and secure talent, Henson’s career highlight came in the 1988-1989 season, which became known as the Flying Illini. Led by Nick Anderson, Kenny Battle and Kendall Gill, the Illini stormed through the regular season, losing only four games. Going into the NCAA tournament, the Illini were rewarded the number one seed in their region. After a scare in the opening round against McNeese State, the Illini rolled through their region, securing a spot in the program’s first Final Four since 1952. The Illini ended up falling to Big Ten rival and eventual National Champions Michigan in Minneapolis, despite beating them twice in the regular season.

After his two-decade tenure at Illinois, Henson finished his coaching career back up at New Mexico State before finally retiring. At the end of his career, Henson finished with two Final Fours, a Big Ten Championship, and a 779-412 overall record, while going 423-224 at Illinois, good for the most wins in program history.