Player Grades: Illini guards shine in win over No. 10 Duke 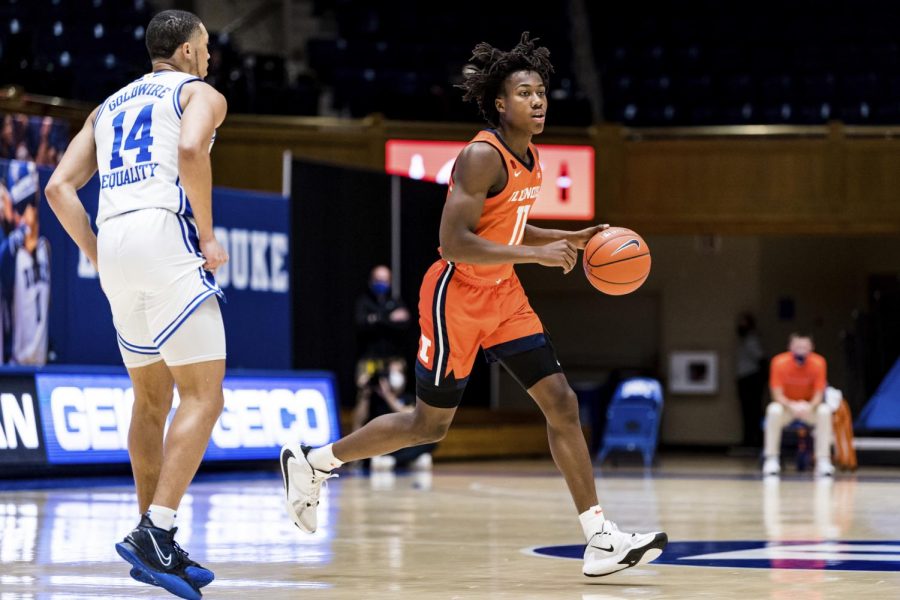 Junior Ayo Dosunmu advances the ball during the game against Duke on Tuesday. The Illini won the game 83-68.

The entire Illinois men’s basketball team showed up on Tuesday night in a top-10 matchup against one of the biggest basketball powerhouses in the Duke Blue Devils. After a tough loss against Baylor last week, the Illini proved they are still one of the best teams in the country.

With six players scoring in double digits, the Illini offense looked unstoppable and have weapons who can come off the bench and make an impact. On defense, Illinois embodied what Brad Underwood loves: hustle and effort. The perimeter defense was strong, guys were diving for balls and working Duke’s big men inside.

I graded the performances of Illinois’ top eight players against Duke.

The Illini star definitely bounced back after an uncharacteristic performance against Baylor. Dosunmu was consistent on offense through all 40 minutes, scoring 18 points on 54.5% shooting from the field. While he missed both three-point attempts he made up the difference by shooting 6-for-6 from the free-throw line.

Dosunmu also notched his second double-double of the season with a team-high 12 rebounds. The junior added five assists and a block. Dosunmu played a very unselfish game. While his transition scoring his one of the best in the nation, his passing in transition is also elite. He found Frazier for a couple of buckets in transition to extend the Illini’s score. Dosunmu also played great defense like the rest of the Illini, helping to suppress D.J. Steward, Jordan Goldwire and Wendell Moore.

It looked like Dosunmu took the Baylor loss personally and revived himself Tuesday. If he continues to play dominant offense both in the scoring and passing game, the Illini will continue to beat top 10 teams throughout the entire season.

After a quiet last performance, Miller came out hot on Tuesday. The freshman standout was a perfect 3-for-3 from three-point range in the first half and helped Illinois get out to a 14-2 lead. Along with Dosunmu, Miller played disciplined defense against former high school opponent Steward, Goldwire and Moore.

But, Miller did get quiet in the second half, not scoring again after nine first-half points. However, he probably earned more of head coach Brad Underwood’s respect as he dove for a loose ball Williams blocked, saving the possession for the Illini. Through an early five games, Miller has proved he’s more than a shooting threat, but he’s also willing to get scrappy and lock in on a team-first mindset.

Frazier looked a lot more confident from behind the arc than in the past couple of games. His transition three is still a crucial asset for Illinois. On 2-of-3 shooting from three-point range, Frazier put up 10 points against the Blue Devils. He also showed he can get to the hoop off the dribble and also knock down free throws.

But, turnovers have been an issue for Frazier in the last two games, with five against both Baylor and Duke. Frazier often makes up for the mishaps with his lockdown defense, but against the most elite teams like the Bears, those turnovers could cost a game.

The Peoria native has looked almost flawless to start this season. While last year it would be shocking to see Williams even attempt a three-pointer, he is now consistently knocking it down from deep. Against Duke, Williams made both of his three attempts and made an additional two shots from the field resulting in 10 points.

Williams’ defense against Duke was also solid even though he had a size mismatch, often guarding 6-foot-9 Matthew Hurt. Williams had three rebounds and two steals, often forcing the Blue Devils into tough passes or bad shots. Williams looks like a legitimate all-around player and the ultimate glue guy for Illinois.

I’m not sure if my expectations for the reigning Big Ten Freshman of the Year are too high or if he just isn’t playing great basketball right now. While Cockburn looked a lot better than he did against the Bears, he’s still making rookie-like mistakes.

Cockburn did put up 13 points, had eight rebounds and stayed out of foul trouble, giving Underwood flexibility in the post. But, he made just five of his 10 free throw attempts. And, Cockburn let too many passes and balls slip through his hands or get ripped away from him. His defense was much better, though, as he was quicker on the perimeter and more disciplined in help situations.

The junior forward having back-to-back strong outings against two of the top teams in the country was never something I expected this season. Bezhanishvili looks much improved from a disappointing sophomore season. On Tuesday, he scored 11 points on 66.7% shooting and made three of his four free-throw attempts.

Bezhanishvili played strong defense both inside and near the perimeter, as he is a quicker option to defend outside than Cockburn. He has also minimized his mistakes and has taken better care of the ball, having just one turnover against Duke.

A consistent Bezhanishvili gives the Illini so much room to work with down low and lets Underwood play a bigger lineup when facing teams with more size.

Illinois’ second highly-regarded freshman put on a show against the Blue Devils. It’s no secret Curbelo is an elite passer who is excellent at disguising which player he wants to go to. But, he displayed that for a national audience often dishing out crafty passes to Bezhanishvili and Cockburn in the paint.

More importantly, he proved he is just as much of a scoring threat as the other Illini guards. Because of his passing abilities, defenses might forget his top-tier handles can lead him to the basketball as well. Curbelo put up 12 points on 55.6% shooting from the field.

The one thing holding Curbelo back from an “A” performance is turnovers. I will cut him some slack as this was only his fifth game a the collegiate level, Curbelo turned the ball over five times against Duke, sometimes getting carried away on his fancy passes and handles.

While Hawkins played just 10 minutes on Tuesday, he showed he can hang with some of the country’s top talents. He plays hard and looks to have a high basketball IQ. With more experience and a little more muscle to compete inside, Hawkins will eventually bring this team to an even higher level.