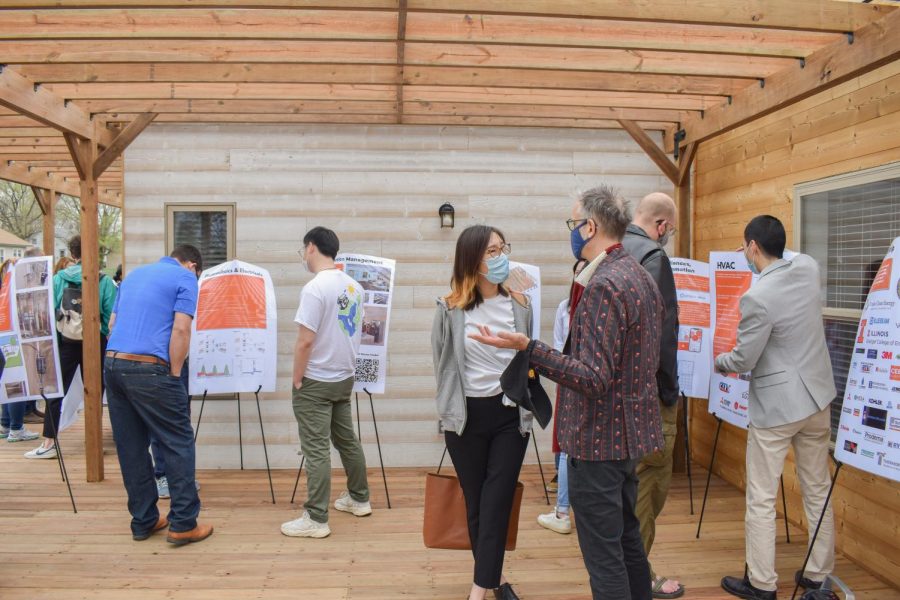 Students of the Illinois Solar Decathlon team show off their informational posters at the grand opening of ADAPTHAUS on Saturday. The project is a sustainable solar-powered home that lowers carbon emissions.

A mile north of campus, a white, boxy house surrounded by a brown wooden deck stands out from the rest of the neighborhood. Solar panels sit on its roof, and the deck is populated with students showing off colorful informational posters on architecture, water systems and other topics.

Students of the Illinois Solar Decathlon team held a grand opening on Saturday of ADAPTHAUS, a sustainable solar-powered home they designed and constructed.

Located on Walnut Street, the ceremony was a culmination of two years of work started by the previous decathlon team. Current decathlon members, representatives from campus sustainability groups and supporting faculty attended the event.

“I think it’s really cool to see something that comes from absolutely nothing — from a blank piece of paper — to something you can stand on and experience,” said Corinne Arfin, master’s student in Engineering and decathlon member.

ADAPTHAUS is the University’s entry in the U.S. Department of Energy’s 2020 Solar Decathlon, a biannual collegiate competition to construct low-carbon, sustainable and livable homes.

The competition was supposed to be held in June in Washington, D.C. but was delayed and moved to a virtual platform due to the COVID-19. The competition will take place over the next few weeks.

The pandemic posed many questions, but the students rose to the challenge, according to Jonah Messinger, senior in Engineering and former president of Illinois Solar Decathlon.

The structural team had to make last-minute changes after a contract company that produced the steel beams for the house went out of business during the height of the pandemic, Messinger said.

The team ended up re-working the plan to make the home structure out of wood from a local company.

“There were a lot of question marks,” Messinger said. “But what’s funny was that within the team, it was as if it was like ‘Alright, just another hiccup.’ At that point, we were pretty resilient.”

ADAPTHAUS is named after the project’s theme of adaptability, Maxwell McWilliams said, sophomore in Engineering and marketing director for the decathlon team.

McWilliams said ADAPTHAUS is a modular home that can be added on and expanded while still being sustainable. The home is considered net-zero, meaning that it only produces as much energy as it needs.

Other features include solar panels, an app that can control appliances and possible monitoring of CO2 emission levels.

The team needed to secure funding and sponsorships from various companies and campus groups. Organizations such as the University’s Institute for Sustainability, Energy and Environment supported the construction of ADAPTHAUS.

Provost Andreas Cangellaris was one of the first people the decathlon team reached out to for financial support. In his dedication remarks, he said ADAPTHAUS is one of the best solar decathlon projects in the history of the University, which started in 2007.

“Community commitment starts with all of us coming together, caring about something in common,” Cangellaris said. “What’s very exciting about this project is that it’s by the community for the community.”

The home will be donated to Habitat for Humanity after the competition ends, something Illinois decathlon teams have never done in the past, according to team vice president Yamini Yedetore, senior in Engineering.

“We’re really hoping this will set a precedent such that all the other homes are lived in and used,” Yedetore said. “Because the designs are livable and made so that people can actually live a completely normal life in this amazingly sustainable, net-zero home.”

The Illinois Solar Decathlon is an interdisciplinary team of students from many different disciplines ranging from engineering, advertising and architecture.

“I think it’s a testament that anyone can contribute to a more sustainable future if they’re passionate about it,” McWilliams said.

The interdisciplinary nature of the work has allowed students like Messinger to appreciate the importance of differences.

Mario Pozo, second year master’s student in FAA and architecture team lead for the decathlon, said the experience has been reflective of how the real industry works.

As someone without an engineering background, Pozo said that’s what makes communication and collaboration so important.

“Even though it was a small-scale project, it has been a really informative experience to learn how the architecture and engineering fields work,” Pozo said.

Susan Martinis, vice chancellor for research and innovation, said during her dedication remarks that she’s incredibly proud of the diverse team’s efforts over the past two years.

“We know that the grand challenges that confront society will not be solved by one way of thinking or just one group,” Martinis said. “I can’t think of a grand challenge with more long-term consequences than the challenge of sustainable energy.”

Through this experience, Halie Collins, sophomore in Engineering and co-president of Illinois Solar Decathlon, said she’s learned how to apply her learning to a real-world situation.

“When you’re in college, you learn about all these technical aspects, but you don’t learn how in the real world, things don’t always flow as smoothly,” Collins said.

Yedetore said she knows that whatever industry she ends up in, she’ll think about sustainability in everything she does.

She’s hopeful that the over one hundred students in the decathlon team will also prioritize sustainability in the future, Yedetore said.

Pozo said seeing the house was the most exciting part of this experience.

“After a year or so of drawing, diagramming and analyzing, just seeing it built is extremely fulfilling and exciting,” she said.