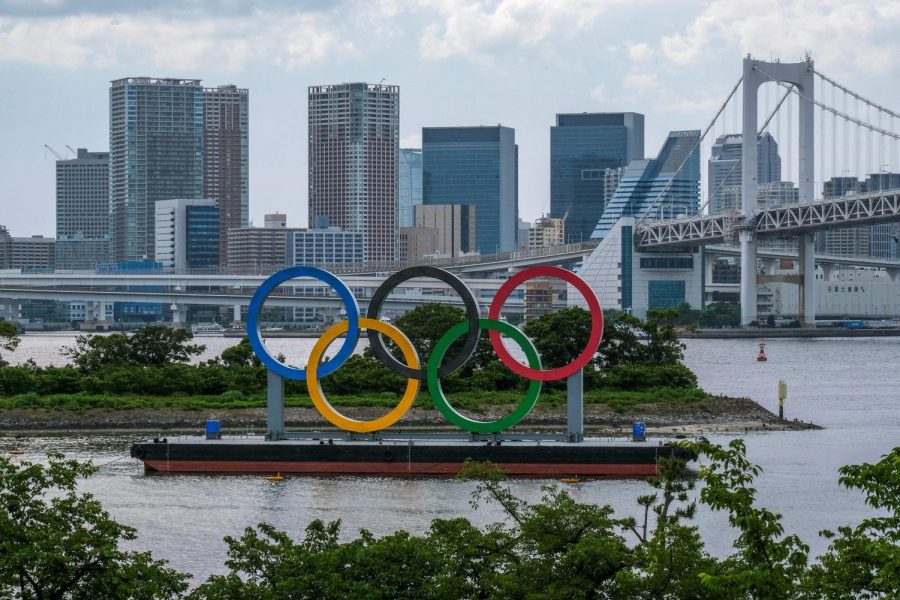 These five rings represent the five main regions that have been brought together by the Olympic Movement. The Olympics start July 23 and will run through to August 8.

After being postponed for one year due to the ongoing COVID-19 pandemic, the Tokyo Olympics are set to begin Wednesday, with opening ceremonies slated for Friday.

Despite the uncertainty around the event following the announcement of limited to no spectators allowed to attend, eight former Illinois student athletes will represent their native countries across several different sports. These sports include volleyball, golf, track, tennis and gymnastics.

While no current Illini will compete, let’s take a look at all eight alumni traveling to Japan.

Detry competed at Illinois from 2012 to 2016, making an immediate impact as a freshman by earning the Big Ten Freshman of the Year award and guiding the Illini to a second-place finish at the NCAA Championship. These achievements happened in his first season in Champaign-Urbana. As a junior, the Brussels, Belgium, native secured the Big Ten Golfer of the Year award after earning three first-place finishes throughout the season.

In his final season at Illinois, Detry took home first place — both individually and as a team — at the Big Ten Championships, winning the conference tournament title in three of his four college seasons.

Detry turned pro immediately following his senior season and has two individual professional wins during that time, though he won the 2018 World Cup of Golf with fellow Illinois alum Thomas Pieters in 2018.

This will be Detry’s first Olympics appearance.

Pieters attended Illinois from 2010 to 2013, winning the Big Ten Championships in each of his three seasons with the Illini. In his sophomore season, the Belgium native became the second player in program history to win a national title after winning the NCAA individual championship in 2012.

A two-time All-Big Ten winner and a one-time First-Team All-American, Pieters took home the conference’s Player of the Year award in 2013 and opted to forgo his senior year and instead turn pro.

Pieters has since notched five professional wins, including four on the European Tour. He also won the 2018 World Cup of Golf alongside Detry while representing Belgium.

At the 2016 Olympics, Pieters finished fourth, missing out on a medal in his debut Olympic appearance by four strokes after shooting nine-under-par across four rounds of play.

After a quiet freshman season, Bull won three high bar event titles as a sophomore, ultimately culminating in a sixth-place finish at the NCAA Championships on high bar, which earned him All-American status.

Bull will be competing at his first Olympic Games this year and will represent Australia.

Competing at Illinois from 2016 to 2019, Diab found immediate success at the collegiate level, taking home the Big Ten still rings title and earning All-American status on high bar in his first year as an Illini.

That success wasn’t short-lived; Diab won the Big Ten still rings title in each of his four years at Illinois, becoming the only gymnast in program history to achieve the feat. The Glen Ellyn native is a six-time All-American, earning the honors in still rings three times, floor twice and high bar once.

Diab has won two U.S. National Championships and two Winter Cup titles and qualified for the Olympic Team Trials this year, though he missed out on a starting spot and will travel with the team to Tokyo as an alternate.

Ram spent one year at Illinois, competing with the Illini for the 2002-2003 season. Though only playing in college for one year, the Indiana native still won almost every collegiate title possible, helping the Illini win the Big Ten regular season and tournament championships before ultimately winning the NCAA team title and the NCAA doubles championship.

Ram competed at the 2016 Olympics, taking home the silver medal in mixed doubles with partner Venus Williams. Ram will be competing in men’s doubles and mixed doubles this year.

Kendziera spent five seasons at Illinois between 2014 and 2018, though he opted to redshirt the 2016 season to try to qualify for the Olympics. In his first two seasons, Kendziera won the 4×400-meter relay in both the Big Ten Indoor and Outdoor Championships, while he also finished second in the 400-meter hurdles at the outdoor event.

As a redshirt senior, Kendziera became the first Illini since 1945 to reach the U.S. Championships in both the 110-meter and the 400-meter hurdles, ultimately winning the silver and bronze medals, respectively.

After four years at Illinois, Kendziera is a 10-time All-American, a four-time NCAA medalist and holds the program record in the 400-meter hurdles.

Bartsch-Hackley played at Illinois from 2008 to 2011, winning the Big Ten Freshman of the Year award in her first season in Champaign after notching the seventh-most blocks per set in the conference.

The Champaign native earned All-Big Ten and All-America honorable mention honors in 2009, and she took home All-America Third-Team and All-Big Ten honors in 2010 after recording 23 double-digit kill matches and nine double-doubles. Bartsch-Hackley also finished with the seventh-most kills per set and the ninth-most points per set in the Big Ten.

In her senior season, Bartsch-Hackley helped guide the Illini to the NCAA national championship, though the team fell to the University of California, Los Angeles. Despite the loss, she was named to the all-tournament team and earned Third-Team All-America honors.

Bartsch-Hackley currently plays for Vakıfbank Istanbul in Turkey, and she will be making her Olympics debut this year with Team USA.

Poulter was the No. 3 recruit in the country coming out of high school. She chose to attend Illinois, where she competed from 2015 to 2018. As a freshman, the Aurora, Colorado, native was named to the Big Ten All-Freshman Team after making 29 starts and recording eight double-doubles, 1,088 assists, 223 digs and 81 blocks.

The next season, Poulter continued to improve, starting all 31 matches for the Illini while also earning All-Big Ten honors after notching 1,190 assists, 166 digs and 112 blocks.

As a junior, she once again took home All-Big Ten honors. Additionally, she earned Illinois Athletics’ Dike Eddleman Female Athlete of the Year award. Poulter started all 34 games and played in every single set, finishing with the 13th-most assists in the NCAA with 1,357.

Since leaving Champaign, Poulter has competed professionally in Italy, where she now plays for Unet E-Work Busto Arsizio. She will be making her Olympics debut with Team USA this year.