Opinion | What’s going on at the Department of Justice? 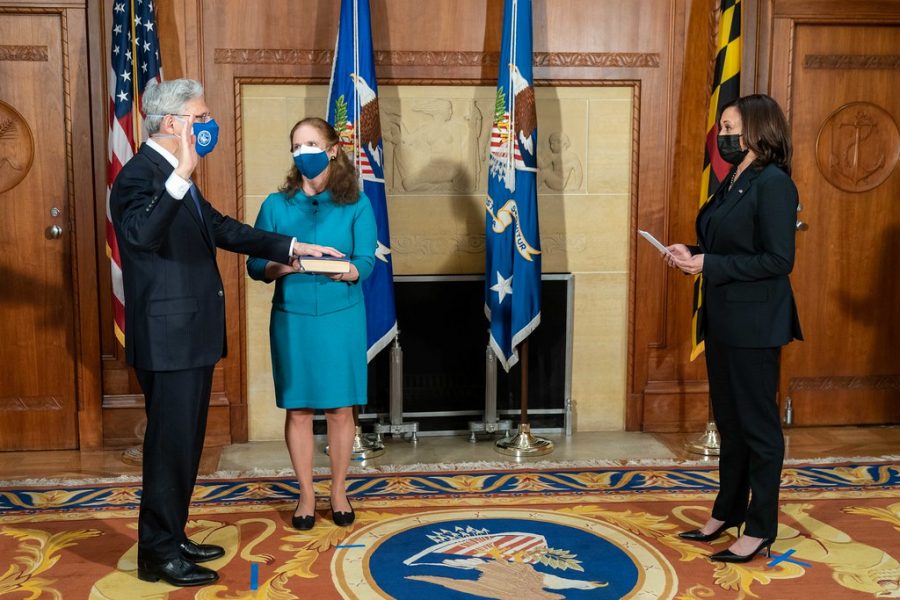 At the U.S. Department of Justice in Washington, D.C., Vice President Kamala Harris swears-in Merrick Garland as U.S. Attorney General on March 11, 2021. Garland has not released the unredacted memo since it is now unshielded.

With the recent charges leveled at the Trump Organization and its CFO, Allen Weisselberg, by a Manhattan District Attorney, the maddening earworm which is the question of Trump’s malfeasance has resumed its humming – if that ever ceased.

While rather light, the allegations of a 15-year scheme to “aggressively treat personal expenses as business expenses,” to the tune of $1.7 million in untaxed income for Weisselberg, should make Trump squirm. One hopes that it signals an early step in the process of indicting him.

Donald Trump the man merits almost no space in print. His main distinction is that one can summarize his treatment of women and nonwhites by changing one letter of two nearly identical pejoratives.

But the indelible stain he inked needs dealing with. Unfortunately, Attorney General Merrick Garland has so far proved painfully underwhelming in this respect.

On several of the foremost instances of Trump’s dereliction and criminality, Garland’s Justice Department has acted peculiarly – or, perhaps to the cynic, predictably.

Consider the case of E. Jean Carroll, a woman who has accused Trump of raping her in a department store in the 1990s. William Barr’s Department of Justice hid, of course, behind the law prohibiting defamation suits against current government employees.

But Garland’s has now echoed this evasion by asserting in a brief with a New York federal appeals court that Trump still cannot be sued. A limp and paltry handling of a case which at least deserves further attention on criminal, let alone defamatory grounds.

Recall as well the infamous Mueller Report, sullied by Barr’s assiduous redaction. Finally, the time has come – hasn’t it? – to view the unredacted memo, now that it’s no longer shielded by Barr’s insistence on attorney-client privilege. Apparently not; Garland has not released it even after receiving a letter from Democratic senators imploring him to do so.

Take care to remember also one of the more jarring displays of Trump’s prepubescent-fascist aspirations: Lafayette Square. Most claims regarding the military’s violent clearing of protesters from the area in June 2020 to allow for a Trump photo-op were dismissed in late June of this year, with inconclusive evidence of a conspiracy to violate the protesters’ constitutional rights as well as the “paramount” importance of presidential movement cited.

Speaking of national security, things are only slightly better when it comes to the Jan. 6 Capitol insurrection. Seeking to avoid controversy and the complexity of the scarcely activated seditious conspiracy law, the DOJ now prefers “traditional obstruction, conspiracy and weapons charges” with similar sentences to sedition.

The gravity of the riot and, consequently, the need for DOJ action have recently been magnified. Not only have new emails emerged which crystallize the systematic attempts by Mark Meadows to goad then Acting-Attorney General Jeffrey Rosen into endorsing election fraud concoctions; we now know that White House aides drew up a proclamation on the Insurrection Act for ready invocation against Black Lives Matter protesters last summer.

Though this only provides a cursory examination of Trump’s transgressions, these are some of the more tangible, prosecutable items. The thick irony of the Insurrection Act revelation would seem, in particular, to furnish Garland’s path to putting the heat on him. So what explains the DOJ’s languid, sometimes even philo-Trump behavior?

For one thing, President Biden has long telegraphed his desire to be a “quiet president.” Yet while this may be in his interest and, in many cases, in the country’s as well, it amounts to an egregious misstep here. The cretinous, soggy bipartisanship and vacuous unity-talk which accompanies this approach won’t engender an honest and judicious addressing of Trump’s crimes but rather a futile appeasement of him.

Second, Biden doesn’t want to politicize the DOJ. A fatuous aim at best, since it is already political by axiom. And a stupid one at worst; neglecting to pursue Trump on these and other delinquencies further politicizes the DOJ by subjugating actual justice to political concerns, namely the fear of being accused of political targeting.

Garland hasn’t been disgraceful thus far. He’s pledged to fight voter suppression in Georgia and elsewhere and has paused federal executions after their contemptible resumption last summer. One hastens to mention that Biden ought to reverse a Trump directive that would send thousands of nonviolent inmates back to prison after serving home sentences during the pandemic. A failure to do this would be continued sordid negligence.

But the DOJ’s very mediocre offerings on the Trump question are glaring and could come to cloud flashes of integrity elsewhere. Garland’s priority should be confronting Trump’s crimes in a manner that would allow democracy at least a wan smile, and – since this would be the logical culmination of such an effort – curtailing his further political influence. Kowtowing on the part of Garland or his boss dooms it to continued gloom.