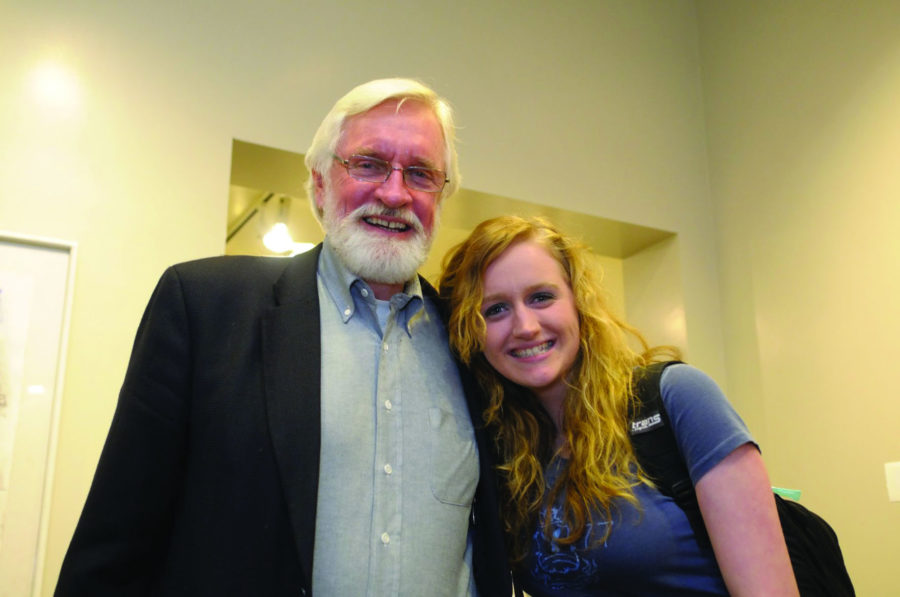 Ray Elliott poses with his daughter, Jessica. The Elliotts have been volunteering at Ebertfest for over a decade.

For Jessica Elliott, a sophomore in FAA, April not only brings the end of the school year, but also a family tradition: volunteering at Ebertfest.

Since childhood, her father, Ray, has been showing film festival guests around the community.

“My dad’s been doing it since I can remember, and it was just this big event every spring,” Jessica said. “I didn’t realize what a big deal they were, that was always really cool, and I remember Roger (Ebert) as well.”

Ray, who retired from teaching English and journalism at Urbana High School to teach journalism at the University of Illinois, has been volunteering for Eberfest for over a decade. Prior to that, he covered the festival for the College of Media’s Alumni publication.

“When I left the College of Media, I knew Mary Susan (Britt) pretty well, and I just helped her with hosting,” Ray said. “It’s a trip, man. It’s a lot of fun, you see a lot of good movies and meet a lot of nice people, and it’s just a really nice thing for the community and the University of Illinois.”

Some of the people Ray has had the opportunity to host include Steve James, who produced the documentary “Life Itself” on Roger Ebert, as well as Haskell Wexler, a cinematographer, and Kaylie Jones, the daughter of American author James Jones. Since the festival draws guests from all over and brings so much to Champaign-Urbana, Ray said he always makes sure he has time to contribute to it.

“There’s been so many people that Roger’s name has been able to pull in here, and that’s something that I set aside a week, five days, every year to be a part of,” Ray said.

While his daughter agrees, she also feels that the people from Champaign-Urbana are part of what make the festival successful.

“I guess Ebertfest is kind of a showcase of all the talent that we have here because it’s so cool that we can bring people in and mesh ideas from all over the world with people in Champaign-Urbana,” Jessica said. “There’s so many people that we bring in, but there’s also so many people locally that are involved. I think Ebertfest is a really cool way of saying, ‘Champaign-Urbana is in the game, we have contributions to make.’”

Though he’s been hosting guests since he began volunteering, one of the things Ray enjoys most about the festival is that the community gets to have a similar experience that he does in interacting with the guests.

“What I like about it is that I’ve been to other festivals and other events where people are sort of separated,” Ray said. “This one, the actors, actresses, directors (and) producers walk out of the theatre between movies and intermingle with the community and talk with them. It’s just a nice thing that Roger set up and it really adds to his legacy of what he’s done for the film industry.”

For Jessica, growing up volunteering at Ebertfest played a large part in preparing her to change her major from journalism to theatre.

“To be able to talk to people who have that mindset and who approach film from the director’s standpoint, I think that definitely influenced my decision to change,” she said. “Because I saw the potential that it had, that you could create something from nothing and that you could tell a story to people and it can mean so many different people.”