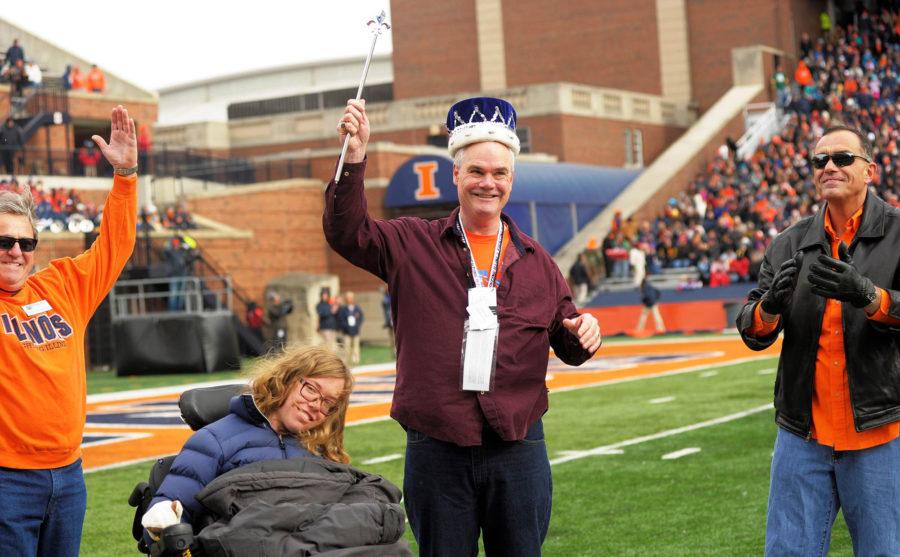 This year, like so many years before it, the dads of the round table convened to cast their vote on whom they should bestow the honorable title of King Dad. The process, embedded in tradition, carefully considers each nomination, as the high degree of excellent contenders makes for a rather competitive selection; especially now.

“This year, we had a really tough decision because of all the really good essays,” said Michael Muscatella, member of the Dads Association Board of Directors. “So, it was pretty competitive.”

Muscatella is in charge of soliciting the nominations and then compiling all of the board members’ votes to determine the next King Dad.

Normally, they average about 25 to 30 nominations, but this year the Board members had to read a few more essays, making their final vote all the more difficult to narrow down.

“This year, we had 33 nominations, which is the most we’ve had in several years,” Muscatella said.

All students at the University are welcome to nominate their fathers for King Dad. Each student must submit an essay outlining the ideal paternal characteristics that their father exemplifies, the extent to which he fulfills his commitment as their loving father and how he acts as a role model.

“What they’re looking for is a dad that exemplifies all of those qualities: support, leadership, service to the kids and to the college,” said Muscatella.

Last year, the Dads Association crowned Christopher Downes as King Dad. Along with the many philanthropic and community endeavors that he’s involved in, Downes is a pretty exemplary dad according to his daughter, Kathleen Downes.

The following is an excerpt from Kathleen’s nomination essay from last year, posted on the King Dad website: “My dad is the greatest man I will ever know. He is the most loving, generous, kind person anyone could hope to meet, and he treats his role as my father as the best job in the world.”

The coronation of the King Dad takes place at the annual Friday Night Dads Association Reception, held at the Illini Union on Friday, Nov. 13, at 5 p.m. The King is crowned and receives his engraved scepter, along with a nifty engraved desk clock. Although it’s not exactly Westminster Abbey, the reception at the Union is a great way to kick off Dads Weekend.

“I would encourage everybody to come out to the King Dad reception,” Muscatella said. “We have entertainment … We have hors d’oeuvres, refreshments, and then we’ve got the King Dad presentation, so there’s a lot going on.”

Two a cappella groups will be performing at the reception: Girls Next Door and No Strings Attached. People can also pick up their tickets at the reception for the Dads Association sponsored events over the weekend. King Dad is invited to all of these events and is even recognized on the football field during the halftime show, where he is crowned yet again.

“The King Dad kind of resides over the weekend,” Muscatella said.

All of the other nominations that did not place among the top three will receive a certificate acknowledging that their sons or daughters nominated them. However, the purpose of King Dad is not solely to earn prizes and recognition, but rather to provide for a more lasting cause.

“The entire Dads Weekend is the fundraiser for all the things the Dads Association sponsors. King Dad is just one activity of the weekend,” said Greg Allen, chair of the philanthropy committee of the board for the Dads Association, in an email. “More of a recognition of dads as a whole.”

The Dads Association, through events over Dads Weekend, funds scholarships and grants. They provide eight scholarships worth $2,000 each to students and eight grants of up to $2,000 to any RSO.

“The RSOs submit their grant applications and we review those at the board level, and we decide which grants we can award based on those nominations. The scholarships are based on a combination of need and achievement,” Muscatella said.

The Dads Association encourages students and RSOs to apply for the grants and scholarships.

“We have a good time,” Muscatella said. “Dads spend time with their kids, but the bigger picture is we raise a lot of money and we give it all back to the students.”