The kick scooter: A fun, convenient way to get to class 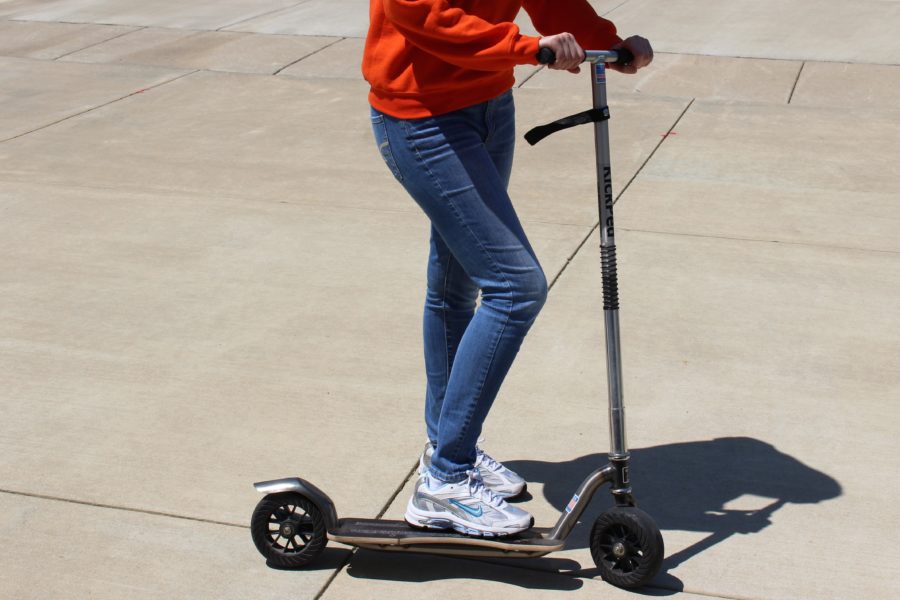 A scooter is one of the many ways students can get around campus.

Late into my freshman year of college, my twin sister added yet another object to our tiny dorm room: a kick scooter. She had bought one online because she was tired of riding her bicycle to class but still wanted a mode of transportation that would allow her to zip through the Main Quad.

She felt the scooter was perfect. It was fast, light and slim. Most importantly, she could simply fold it up and take it with her into a building once she arrived at her destination. Gone were the days when she had to park and lock her mode of transportation outside. How convenient!

I suffered because she had no place to store the metal object. She initially decided to place it on the only open area in our room, which was in front of my dresser. I had to move it every time I wanted to get to my clothes, and it would sometimes fall on my toes. I think I might have made her move the scooter to her side of the room, but I do not remember clearly now.

I do remember I was annoyed at my sister, and because of that, I decided I would never get a kick scooter. People kept telling me I would want one after seeing my sister scoot around campus, but I was sure that would not be the case.

A while later, once I had my schedule figured out for the fall, I realized I would not have a lot of time to walk a long distance between two of my classes. Locking and unlocking my bicycle would waste too much time, so I found myself making the decision I vowed never to make: I bought the same scooter as my sister.

When we arrived back on campus, we were surprised to see more people were using scooters. Before my sister got hers, we had not seen many students scooting around campus. Now, we could spot a few per week. This prompted me to believe my twin sister had started a trend on campus.

I started to get a sense of why having a scooter was a good idea when I noticed people around campus observing me as I scooted past them. Sometimes, they looked surprised to see someone in college riding a scooter, but I also heard several students who were tired from walking whispering to one another about how they wished they had a scooter to get around campus. In the end, I was happy with my decision to buy one after all.

But using a scooter on campus is not always easy. Scooting up slopes is quite the exercise, and my scooter can get heavy if I carry it inside buildings and up several flights of stairs. I also use my scooter only when the weather is nice; I retire it during the winter months. During the winter, I walk and ride the bus.

Having a kick scooter, however, makes my daily routine more fun. Because I live off campus, I safely secure my scooter in the trunk of my car and take it out once I get to my parking garage on campus. Then, I easily board the bus with my scooter. Once I arrive, I simply scoot away into the sunset, heading to my next adventure — or class.

Mariah is a Junior in Media
[email protected]